This post is overdue: inadvertently I deleted my first version focusing on growing veg, and was dispirited by doing so. I had been unusually pleased with the writing, the photos worked well as late Summer began to give way to the first signs of Autumn and I felt foolish and somewhat ashamed of my schoolgirl error. By the time I recovered my sang-froid we had entered a domestic IT maelstrom which it turned out, coincided with a breakdown of my access to WordPress, the platform I use for the blog.

All is now well and meanwhile gardening aloft has been a consoling occupation.

The activity of gardening, as Sue Stuart-Smith highlights in her book ‘The Well Gardened Mind’, is now widely recognised as a creative way to harness intense and painful feelings. This year, the cramped rooftop garden has evolved into a secluded space with a strategically placed spindle bush, Euonymus europaeus Red Cascade, taking up its place centre stage, offering beauty and interest at various points in the year and conveniently dropping its leaves as light levels fall.

Life on the Allotment

In response to a request, instead of somewhat tantalising references to the allotment, henceforth (but probably not in the quiet depths of Winter) I will be including a section on the allotment where I am definitely the under-gardener, but with views and opinions of my own – not always an easy combination for the team leader.

The allotment is a few miles away, on land rented by a private allotment society, which we took over from my sister-in-law who had cared for it with her husband for many years, bringing science as well as hard work, and neat rows to the endeavour. Things are now a little bit more random, but her legacy lives on in the carefully nurtured ground and some wonderful Autumn fruiting raspberries which last year produced fruit for over 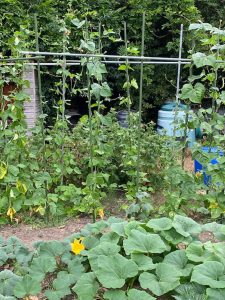 three months, protected a bit from excess heat by the nearby wisteria which wanders over the shed and though the neighbouring trees and hedge, mingling the while with a fruit-bearing bramble with a good head for heights. Unfortunately there is a tendency for the beautiful racemes of the wisteria to make access to the shed rather difficult, so any inconvenient trailing stems are cut back without due care and attention, only for the very well established climber to flower profusely another year.

The allotment is approximately 7m x 30m but we sub-let about a third to our neighbouring allotmentier who already has a large immaculate plot but is pleased to have more. In return we benefit from the land he has given over to nettles (so we feel we don’t have to) which will hopefully provide food and shelter for some of the more than forty species, I read, of insects and butterflies that are partially or completely dependent on this high-protein food.

I have tasted nettle soup but haven’t yet developed a real liking for it, whereas studying the life of all sorts in our neighbour’s wild life pond is engrossing and a real source of fascination – nature red in tooth and claw. Very much earlier in the year, and several weeks after some of the copious frog spawn had emerged as tadpoles, but before any lack of rain-water was unduly significant, large numbers of dead adult frogs were to be found on the grass paths around the pond with no obvious explanation. I wonder why.

The planting style is somewhat informal – beetroot seeds scattered rather than necessarily neatly planted in defined rows – but after several years we reached a peak last year when we grew about 25% of our considerable annual fruit and vegetable needs, 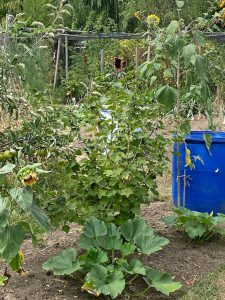 tomatoes and leafy salads excepted. This achievement was in spite of the encroachment of pumpkins enthusiastically nurtured by the rapidly growing grandson and a steady supply of veg to family and friends at peak season – mostly of course the ever over-productive courgettes. We were self sufficient for many months in potatoes, yet longer in onions, and were eating stored butternut squash well into the new year. However, the birds got most of the ripened sweetcorn so somewhat disheartened we gave up this year as we will again be away at the crucial time.

This year’s radishes and dwarf beans made a brief appearance, garlic and shallots were rather scant (too few plants) and the self-seeded sunflowers looked stunning from mid-Summer onwards, with different plants flowering and fading in turn, seemingly partaking in a carefully orchestrated display. They have happily stayed the course and will hopefully provide the birds with seed until much later in the year, having surprisingly struggled for a while in the extreme heat, hanging their heads rather than turning to the sun. The early Summer months are always noticeable for the profusion of mare’s tails which cover the ground with fern-like greenery growing up to 18 inches or so tall, and retreating as the days begin to shorten once again. They don’t necessarily interfere with plant survival, and have been around since the dinosaurs walked the earth, but at their peak they take over and make it difficult to see what’s happening closer to the ground. Carrot fronds for example are difficult to distinguish from the top growth of the habitual invader.

Beans (French and Runners) have been plentiful, beetroot abundant with several successful repeat sowings, exceptionally large numbers of ridge cucumbers as well as our first apples, so encouraging, but in terms of ground covered, and weight of crop, as 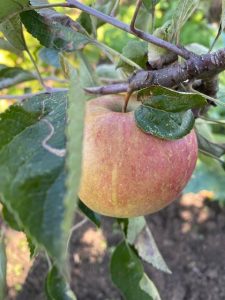 last year, the butternut squash plants advanced in all directions, apparently enjoying the heat and strategic watering, until that had to be paused, culminating in plentiful fruit from both the varieties we selected. One of these promised fruit weighing up to 3Kg, which was fulfilled, and now holds the prospect of rather a lot of soup in the coming Autumn months. So some successes but overall we have harvested smaller crops (potatoes and onions) than last year or had fewer pickings (beans and raspberries sadly too) presumably as the effect of the heat and drought was felt all round.

I learnt the French word for beetroot (betterave) 0n a recent trip to France – why haven’t I picked up such a wonderful word before, I wonder? Maybe growing up at a time when pickled beetroot was the norm in England deterred my French teachers from introducing the name of such a versatile vegetable.

Both the butternut squash plants and the cucumbers were reared from seed, on the balcony, in individual small re-used plastic pots. The seeds share the characteristic of being large, and with a very high germination rate, which makes the whole undertaking much more straightforward than planting fine seed with the later requirement of thinning. As I have mentioned before I am not very keen on the gardening tasks which require time and patience and I’ve learnt that our kitchen, with a large sky-light, can get much too hot for happy germination.

Directly underneath this magnet for heat and light, at the height of the heatwave (so several weeks after these seeds needed to be nurtured before being planted out) the indoor thermometer recorded a temperature 0f 43 degrees, while other rooms, shaded by blinds and shrouded by plants, were comfortably cooler.

Next year we are going to try growing sweet potatoes which we learn involves growing ‘slips’ from sweet potato tubers and then planting the slips. As it is a rather complicated task I think I will leave it to others.

However, sadly and worryingly, wherever you looked at the height of Summer, in this dried out corner of the country, birds and bees were largely absent from roof gardens, allotments, riverside paths and elsewhere and while shrubberies and hedgerows  managed to stay predominantly green the leaves crisped up all around, water sources dried up and even the courgettes were significantly less productive. Although I admit, as someone who can quickly feel overwhelmed by too many courgettes, courgettes in moderation came as something of a respite.

And on the Balcony

Recently bees have resumed their journey up aloft to enjoy the late-Summer flowering caryopteris, and its violet blue flowers (still a magnet at this time of year) and the pots and plants have recovered well from the sky high Summer temperatures and limited watering which for a while seemed would go on for ever. The newly planted 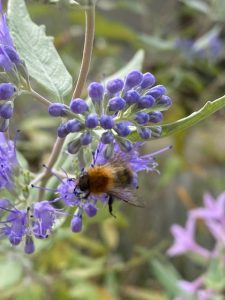 pomegranate has enjoyed the heat and light and is still holding its leaves, which have turned from a particularly brilliant glossy green to yellow and ochre, so the balcony is still full of colour but more muted now. Roses, pelargoniums and thulbaghia are continuing to bloom, a few clematis flowers, rather faded in colour, are still in view and the olives are ripening. The scene would not be out of place on any balcony or roof garden, catching the sun, between the southern corner of England down to the sun-baked far reaches of Provence or Tuscany, with silver evergreens and drought tolerant plants. Pretty as a picture. 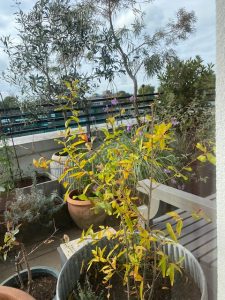 But there are now only a few vestiges of the cottage garden plants that have successfully competed in the past with the heat-seeking plants for space and attention. One by one as the Mediterranean plants have flourished in this year’s exceptional heat and drought, so the containers have become the final resting place first for aqualegias, which struggled without adequate rainfall early in the year, thalictrum, which should never do well in exposed high rise gardens, but have done so until this year, or hardy geraniums, which have unsurprisingly found the hot, dry conditions to be a challenge too far.

On the other hand clematis, roses and salvias (perhaps not a traditional cottage garden plant but well suited to assembly planting) have defied the odds with long flowering seasons, and whenever there has been respite from the heat, or I have done some cautious watering, have put on a healthy growth spurt with renewed vigour.

This may or may not be a good thing in the long run as trees, shrubs and other plants are known to put out an exceptional display of flowers or fruit before showing signs of dying back or succumbing to a disease or deficiency. I have an elderly rosemary bush that I am watching anxiously; after flowering at the beginning of the year it has looked less and less likely to green up again and I’ve taken the precaution of planting up 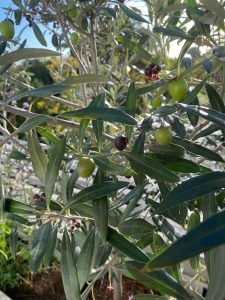 another rosemary (Miss Jessopp’s Upright) ready to replace the original plant which I’ve grown attached to but has, I think, more or less reached the point of becoming a distraction. On the whole I’m keener on having a planted space that is full of favourites, happy in their environment, but in reality, and disappointingly, the roof garden only has the capacity for one or two people. I often wish we had more space for both plants and people.

We have been enjoying wonderful raspberries and the last, probably, of our courgettes this weekend. The butternut squashes are being (mostly) housed by friends and family, the stored potatoes have begun to sprout so we may need to rethink the storage arrangements and eat them quickly, and the brassicas planted against the clock seem to be growing happily.

As I have mentioned previously, one of my cousins once pointed out that I don’t like mud. He was right, and it would be truthful to admit that any references to veg growing on the allotment over the next few months maybe hearsay rather than based on first hand experience.