Mid-August was hot and humid for days. Thunder and lightning but no r 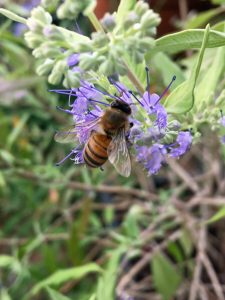 ain, and for a long while grass like straw, shrivelled plants, early leaf fall and dust in the air.

But the bees on the balcony still had a ball – Caryopteris, Verbena Bonariensis and my unnamed self-seeded mallow, which came back into flower, provided plenty to enjoy, with olive fruits adding to the Provencal scene. However, lingering outside in the evenings wasn’t without it’s challenges (competition from the roar of returning traffic being the most obvious) while the various sensual pleasures evoked treasured but elusive memories before they quickly slipped away again. 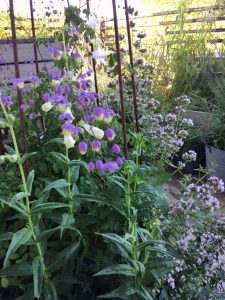 I also returned to some proper gardening (clipping, weeding, dead-heading, planning ahead) as opposed to providing a life support system of food and water – the former rather erratic in supply locally as the benefits of seaweed based preparations are leading to shortages or maybe stockpiling, who knows, and the latter possibly not as often as the plants would like, but more than any water shortage measures would support. The thalictrum have been cut down to size after flowering for months, and their willowy beauty being admired from afar, all Summer long. On the allotment, garlic and purple sprouting broccoli are already being sourced for Autumn planting, prompted by a visit from the interested ten year old – now the proud producer of a very impressive cucumber.

But what a difference a day makes – a twenty minute shower and we could all breath again and after another forty-eight hours of intermittent thundery rain, an Atlantic mist then settled over the neighbourhood, with the church spire on the brow only just visible. 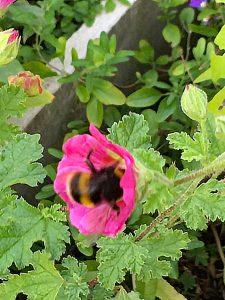 This is the time when thoughts turn to next year and the successes and failures of this Summer season. One being missing out on planting nerine bulbs earlier in the year. These would be flowering now and adding a certain slightly over the top vivid, or possibly slightly more subdued, pink display.

Summer is now tipping into Autumn and one of my favourite clematis has come back into flower, rather moth-eaten and not as prolific as first time around, nor is the unexpected flush of the rambling rose outside the bedroom window quite as rosy pink, but the wild mallow is flowering prolifically again, as are the salvias, and August is happily the month for the variegated tulbaghia to outshine everything else. 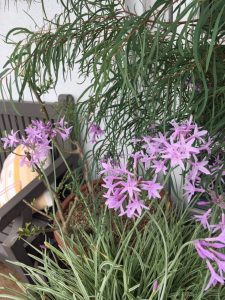 My father was a keen gardener, much in love with, and in awe of, the gardens at Rousham House, Oxfordshire, designed by William Kent but also with an eye for the combination of shapes and colour that traditional herbaceous boarders could do well on any scale. If I was lucky as a little girl I would travel in state on top of the wheel barrow bearing their cut-down stems, together with Autumn leaves, en route to the compost pile, which by bonfire night had morphed into a funeral pyre before being straddled by an old stuffed shirt with a mask and hat on top and set alight as the prelude to an evening of catherine wheels and rockets, sparklers and sausages, with the kitchen window a convenient viewing gallery.

I was never particularly keen on dahlias, one of the mainstays of the gardens of my childhood, until the relatively recent renewed enthusiasm, with Christopher Lloyd and Great Dixter leading the charge, for both older and new varieties. The wide ranging forms, as well as the bright and also beautifully soft colours, began to tempt me. But I chose unwisely for the flower strip at the allotment a couple of years ago and might have done better to emulate the neighbouring plots planted with long stemmed varieties in unmissably bright colours, or better still the family expert whose WhatsApp photos of coral pink and rich red dahlias, with long-lasting flowers, confirm they are evidently growing happily in a flower border in Wiltshire. For any keen flower arranger these blooms would be enviable pickings, unlike the dahlias I grew, which were quickly eclipsed by the taller cosmos and rotted without a trace at the end of the season.

I have also been put off by the dedication required to lift, store and label – all of which I now understand is unnecessary if you live in a warmer part of the country (tick) and give the crowns a generous layer of Winter protection.

However, to really embrace dahlia growing I might need to put childhood memories to one side.

As I grew older, helping our lovely Saturday gardener (mentioned in previous editions) was educational and something of a treat as he always shooed me indoors at the point when I was getting bored and he needed to get on. My formidable father on the other hand always overestimated my enthusiasm and particularly on the brink of a family holiday, with tensions riding high, and the ritual deadheading and watering to be done and time running out, stepping into the role of under-gardener was always rather fraught as my father’s sensitive soul was deeply hidden at these moments.

My job was often to deadhead the dahlias so that we would come back from our travels to a beautiful display. I had been shown what to do, I knew what to do 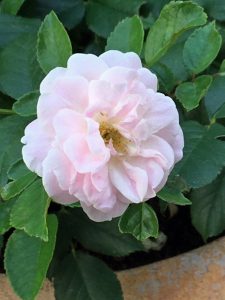 but under the pressure of the moment the round buds yet to come into flower could easily be confused with the conical shaped seedpods that I was tasked to remove. The herbaceous border was long and the dahlias buried amongst a range of other plants including golden rod, mildewy Michaelmas daises and prickly roses with ants’ nests underfoot. Luckily the compost pile wasn’t far away so a little deft re-arranging of some grass cuttings over the bucket load of dead headed dahlia stems covered my trail and with it my dread of getting it wrong.

Looking after other peoples’ gardens, in what ever way, always feels onerous – not least because private passions and gaps in knowledge can so easily collide, and it often takes a while to acquire a certain useful level of horticultural knowledge. I imagine that confusing flowers that have come to the end of their life with plants that have died, might be a difficult distinction particularly by mid-August, customarily mid-holiday season, as by then everything tends to have begun to look somewhat sorry for itself. So it is particularly impressive to hear of someone continuing to water the plants in her mother’s garden with the belief that doing so might be futile. Meanwhile her mother waited anxiously to see what had survived and the answer, unexpectedly but unsurprisingly, was everything.

I’ve admitted previously that I am by nature rather too bossy to be safely let loose offering gardening advice to anyone with horticultural questions, particularly as I’m also keener on the overall set design than on really learning more about a wider range of plants and planting conditions as opposed to greater appreciation of their decorative qualities or appeal to pollinators.

I’ve never been very good at doing my home-work and it might be true that my spelling did not improve as I grew older, perhaps partly in response to my mother’s spelling corrections – frequently part of the contents of her letters to me when I was away at school and actually old enough to spell quite well. The family news and general interest in my world with its ups and downs made for much more absorbing reading, but I later headed for a profession notorious for it’s poor hand-writing (my weapon of choice to conceal my bad spelling in pre-spell checker days) and a career my mother was always strongly in favour of: make of that what you will.

Instead I’ve tended too often to rely on ‘winging it’ although it is also true to say I’ve absorbed a certain amount of knowledge along the way which has certainly added to my interest in the world of horticulture and the part in plays in the lives of many of us, revealing as it often does our preferences and privileges – from childhood ambitions to have a ride-on mower, the careful nurturing of souvenir cacti, growing mustard and cress on window-sills or hyacinth bulbs indoors, planting and pruning alongside family and friends, the stirrings of garden envy and elaborate planting ambitions, the rewards of growing from ‘plant to plate’, a wider interest in all green issues and the dawning reality that not all is possible, especially as you get older.

Sheltering from the Storm 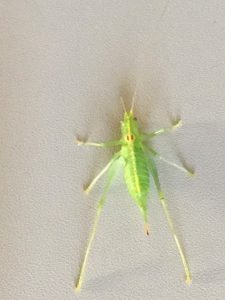 Finding insects aloft is always a delight but certainly not to be taken for granted. The Caryopteris is teeming with bees at this time of year and while the bumble bees head first for the verbena their solitary relations also visit in large numbers, so hopefully my various bee/bug homes have found favour. Ladybirds are very common, indoors and out, and plenty of woodlice and other unidentified life too – more surprising (remembering that the balcony is on the fourth floor of an Edwardian building with high ceilings) is the occasional passing cabbage white butterfly but a grasshopper! It may have leapt too far as it vanished after spending a few hours resting stock still on a kitchen cabinet and resisted all attempts to lure it outside. However, the next morning it unexpectedly joined us for breakfast, landing first on an available forearm before accepting the invitation to re-join the outside world. 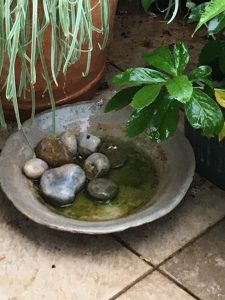 So much to observe and take in, albeit on a minute scale, but the roof garden has been a fortunate, safe sanctuary during the recent long and uncertain days. First in the silence, then the coming together of the Thursday ‘clap’, conversations across the roof spaces, and later offering the possibility of welcome privacy when sheltering furtively under the shade of the flimsy parasol. Now the familiar patter of rain drops has taken over as steady rain has settled in for another day keeping me indoors while in the wider world, and in different ways, the lockdown is being partially lifted.

Yasmine Shamma has written in ‘The Conversation” about gardening, and makeshift gardens, as ‘a universal antidote’. The hope and optimism that refugees, particularly in Jordan, invest, while waiting, in the cultivation of the land and the planting of seeds is humbling and inspiring too with the central importance for refugee gardens, of measuring time, as they do, ‘as a slow, seasonal clock’.

If the rhythms of gardening and the tending of plants, with all the various anciliary activities, can provide hope, solace, visual pleasure and much more, then a recent walk along a cliff path, while staying in Cornwall, was a reminder that nature often does it best – not so flamboyant maybe, but full of the hidden treasures as captured above.