The last few weeks have been busy.  The newly planted trees in the grounds below have needed watering and our allotment has needed attention. In return it has already rewarded us with fresh vegetables, including aliums of all sorts, shallots being a new treat, as well as encouragingly good prospects for the cucumbers which at this stage seem to be particularly plentiful. However, it is the balcony that has preoccupied my waking hours. Plants have demanded care and attention, the larger containers have been moved around to enhance the space and various failures have fortunately been lost in the undergrowth. So like an over anxious parent I have been hovering around tending and fussing, but not writing. Then this year, as every year, as the year turned and mid-Summer was left behind, as if a switch was thrown (an American expression I think I first heard in my student days) I stopped fussing, left the plants alone and began to enjoy what we have. 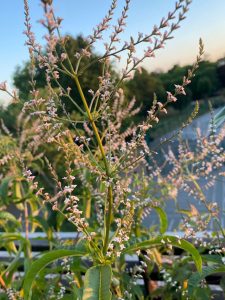 The benefit of benign neglect in a small space is, I would argue, a certain charm as the encircling plants take over, together with a wide variety of insects, including this year I have noticed day flying moths, identified by a long-distance friend with the necessary expertise. Meanwhile I am of course green with envy whenever I find myself enjoying someone else’s garden and more expansive green space.  But for now the heat has driven me indoors and I’m pleased to be exploring the wider reaches of the horticultural world, while watching with horror as reports of the devastation caused by wild fires across Europe fill the news and our screens.

Turkish delight was often a Christmas treat, gift wrapped and with a particular flavour and chewy texture which I’ve always enjoyed. On the other hand my introduction to rose water as an ingredient of skin products and fragrances was a talk from a Yardley rep in the 1960s. The talk was organised by my school, held in the gym and was completely out of step with the times – a year or two later, and heavily influenced by Mary Quant, I would be painting freckles on my face, using extravagant amounts of black eye liner and wearing mini skirts. But I do remember a key message being that rose water in the base fragrance of most perfumes. Why I’ve remembered this is something of a mystery but as rose water flavoured desserts, and Middle Eastern food, has become a bigger part of my life, I have from time to time wondered where it comes from. Now I know thanks to a few free moments, an interesting website and renewed curiosity that led me to a wonderfully sympathetic description of the fields of roses in Qamsar and the craftmanship involved in turning the petals into a global product.

I recommend a read when you have a few moments, although you will have to navigate your way through the adverts. Here is the introduction to the article

– ‘The soft, pink color of dawn still lingers in the sky, and the first golden rays of the sun are just starting to touch the tips of the surrounding mountains. Yet in the rose fields of Qamsar, a small town in the highlands of central Iran, work is already underway. Amid the chirping of nightingales, locals make their way into the fields, where the crisp morning air is heady with the thick aroma of Damask roses.’

It is the mention of nightingales, combined with the intense pink of the rose petals, that I found particularly evocative, although I shouldn’t have been unduely surprised about the nightingales as I already knew that the population in Europe and the middle East could be measured in millions rather than the sparse numbers in South East England, where they struggle at the northern limit of their territory. I’m not sure that any have been spotted in Berkeley Square recently.

It’s mid-morning and already 31 degrees indoors and out, with temperatures expected to reach the 40s later in the day .

At first glance life on the rooftop balcony is deceptive as the mediterranean plants are adapted to some extent to withstand heat and drought, and I have continued to water from time to time, filling the watering can, rather than making use of a hosepipe, so I don’t overdue it. Nevertheless the contrast between the verdant olive trees aloft with frui 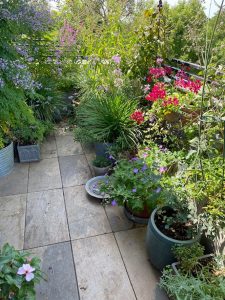 t beginning to swell and the parched ground below is very evident.

I’m reasonably sure that my choice of mediterranean plants was really to remind myself, and perhaps others too, of treasured time spent in southern climes rather than to create what has become in horticultural terms a mini Mediterranean zone with flora in common with parts of Australia (several eucalpti), South Africa (tulbaghia and pelargoniums), Southern California and the Mediterranean basin itself with rosemary, bay, oregano and thyme as well as pittosporums and penstemon. Bizarrely I always struggle to get lavender to make it from one year to the next so any tips on growing lavender (English or French) in containers would be very welcome.

Roses too seem remarkably tolerant of the heat and arid conditions, perhaps indebted to their Iranian ancestry, and are providing a very valuable barrier between the hot air outside and the main bedroom alongside. 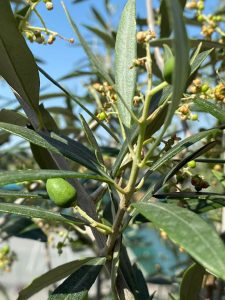 I now know that from a horticultural perspective the Mediterranean zone is considered to be between 31 degrees and 40 degrees latitude north and south of the equator, with probably in most years an equivalent range of Summer temperatures. Winter rains are a feature too. Toulon, at the most southerly tip of mainland France, has a higher annual rainfall than Paris which comes as something of a surprise. Typically the rain in the South arrives in heavy downpours rather than light rain on frequent grey days. Until not so long ago, armed with both hosepipe and watering can, I have manipulated the conditions on the roof garden, to mimic the natural habitat of the Mediterranean plants, while having my cake and eating it too as I’ve also enjoyed the Summer heat and straw coloured palette on holidays further South.

Now I am more restrained.

I have enjoyed ‘no mow May’ and the beautiful hedgerows, verges and field margins left alone by councils and landowners who have shown restraint and allowed these areas to become much needed habitats and havens for pollinators. But since the overgrown vegetation in certain areas is contributing to the spread of the ever increasing wildfires across Britain, particularly in the drier South East, I wonder if this apparently simple expedient may sadly need to be reconsidered. Cambridge Colleges, Hampton Court Palace and much more modestly our grounds below, have given over space to Summer meadows, now dessicated, close to buildings of all sorts, including businesses and private homes.

So if you have a south facing space in the South East corner of the (for the moment still) United Kingdom and want to plant up containers large and small here are some suggestions:

Olives, bay, Eucalyptus Nicholii, pittosporum, the impossibly named Convolvulus cneorum and new to me, pomegranate varieties, adapted for more northerly climes. These take a while to mature and in the Northern hemisphere produce fruit between October and February, which is all someway off but theoretically possible if I’m patient. Meanwhile I will enjoy my container based pomegranate which has reached the stage of being a very attractive, spreading small shrub with unexpectedly glossy bright green leaves – lovely. I’m hoping fruit will follow but that might be more likely in the Metropolis if Summers continue to heat up, which of course comes at a very high price. 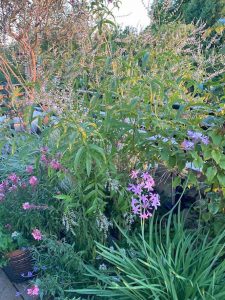 I love the rituals that I associate with time spent in sunny Southern climes across the Channel – lowering and raising awnings and blinds, walking on the shady side of the street, opting for lighter clothes and watering in the cool of early morning or evening. However these rituals are now increasingly a part of life in my edge of city spot which you might think would mitigate against growing more familiar cottage garden plants and others which flourish in cooler, damper English Summers, but I have had surprisingly successes over the years.

If you like thalictrum but don’t have a convenient meadow to hand, try growing them in containers; you might find that they do rather well. The key thing seems to be to cram things in so that in time, as the temperature rises, at least all the roots are in shade and the risk of losing too much moisture through evaporation is reduced. This might mean sacrificing the stragglers that don’t like the conditions, or perhaps don’t like the wind. Tulbaghia does tolerate the wind but needs dividing when it gets overcrowded, otherwise the number of flowers tends to be rather disappointing, although the length of season (April – December) is a treat. 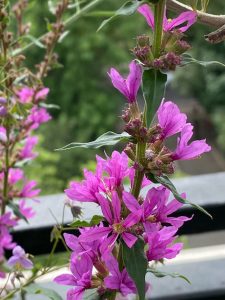 Dropmore purple is a moist soil loving plant but has grown well this year in shaded containers even with rather too much competition from other plants. It’s taken a while but a couple of years on from my first attempt the plants have bulked up, come through against the competition and put on a wonderful display.

Many thanks to everyone for their thoughts on the comments section below as well as through e-mails and other acknowledgements. I very much appreciate any curiosity about the balcony – which in reality is often much smaller than expected, less floweriverous than expected (next week it will always look better) which together with the absence of adequate seating for guests can’t be ignored. 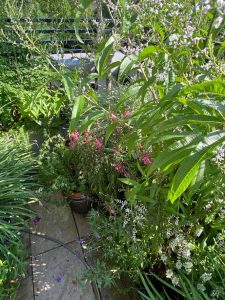 Nor can the flattering dismay when visitors who have generously walked the required two or so steps forward and back to take it all in, and are then faced with the realisation that while I write about what I do know or have observed, I mostly don’t know.

Not long ago I was able to demonstrate to a visiting friend that yes you can grow roses in containers (preferably large and with selected roses optimally) but no I didn’t know the name of the rose she particularly liked. Notebooks of my gardening year with details of plans and purchases are mostly empty and my filing system(s) of plants purchased largely incomplete. Keeping labels with the plants is of course the wise way to go but I could do better.