Yesterday the wind was back and after a while I was driven indoors by the fierce gusts blowing the dusty dry compost skywards and threatening the strategically placed, but flimsy garden parasol. An area of high pressure apparently came up against an area of low pressure, keeping the temperature up and the winds lively. Today the wind has relented.

It’s not always easy to be sure why a particular association comes to mind, but the solitude of gardening can be a good jumping off point. So it was that while watching the bumble bees flitting from flower to flower I remembered Henry Reed’s multi-layered poem ‘The Naming of Parts’. The poem, written in 1942, interposes lines recalling nature in Springtime with the voice of an army instructor, naming parts of a rifle – beauty and brutality.

….. ‘the early bees are assaulting and fumbling the flowers’ and we, here and now, have not only ‘got bumble bees going rapidly backwards and forwards’ but swallows, or more proba 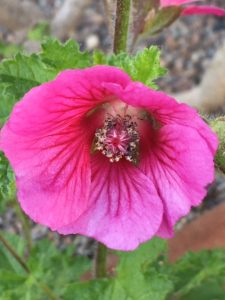 bly house martins, darting and dancing above. Improbably, actually, as we are close to a main route to the Surrey Hills, the traffic is beginning to build up again at peak times and we can at moments be nearer to the heavens and the aerial feeding birds, than the ground nesting bees.

However, it has quickly become obvious that the plants that were last in line when it came to watering before my retreat indoors, were the plants that suffered most, but in rather unexpected ways. One of my olives, unwatered for several days and with the foliage acting as a sail, had been spun round on its axis, losing leaves and damaging branches as each rotation involved a challenging encounter with the heavy railings that form the roof-top boundary. I’m expecting it to recover from this auto-pruning but a favourite clematis and, surprisingly perhaps, a container largely of often resilient salvias, but as dry as a bone, were cut off at compost level by the wind’s thrashing motion. 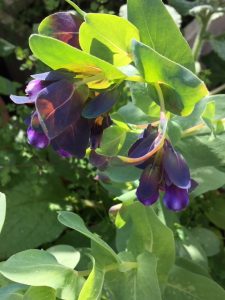 I have been delighted by the unheralded arrival of a wild lavatera or mallow, identified by a kind and  knowledgeable friend, and much favoured by the bumble bees. But having been overly pre-occupied with other gardening concerns, and evidently  insufficiently vigilant about the watering, I now obviously need to do better.

We are losing /have lost the enveloping protection and summer green of the vulnerable, elderly horse chestnut a few feet from the balcony.  Favoured by a wide variety of visiting birds, as well as the local grey squirrels, it now has to be removed. A leaf-mining moth might be partly to blame but a more immediate cause is likely to be  extensive tarmacing alongside the boundary fence, sealing off the tree’s water supply. This happened a couple of years ago when the neighbouring property, a school with limited outside space, understandably extended their usuable outdoor area. Sadly they did so without anybody noticing the risk to the nearby tree and including some alternative surface materials to channel rainwater towards the roots.

However, I read that water percolation is only one of the many hazards for mature trees growing close to buildings and surrounded by hard surfaces; tarmac can be permeable and it’s easy to be wise after the event.

A PiCUS test has nevertheless been done. PiCUS Sonic Tomography I now know is the arboreal equivalent of ultra sound, and the results are not good – the tree must be removed before Autumn gales replace the warming summer winds and it will leave a large gap.

Thinking of wind and gardens invites thoughts of Dungeness and Prospect Cottage, another garden I’ve only enjoyed through magazine pictures and virtual images. Film director, diarist and gardener, Derek Jarman’s horticultural challenge had been to introduce beauty and life into an exposed, harsh, barren area of shingle in the shadow of the Dungeness nuclear power station. 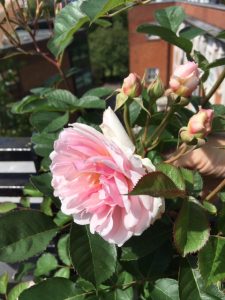 I’m anticipating that the complete exposure of the balcony to the winter winds will alter the micro-climate in the area below the metal railings, which is in effect a miniature walled garden with a brick surround. More challenging might be the impact on the taller plants and shrubs, many of them like the olives, bay and rosemary having their ancestral roots in the warmer climes of the Mediterranean and their horticultural heads way above the parapet. My particular concern is actually for the younger of my two E Nicholii, a small narrow leaved eucalyptus, endemic in New South Wales. It was battered through the winter and is only just beginning to recover so I will move it to a small recess in the balcony as next Winter descends, in the hope of protecting it. An older tree, planted against a wall, although in a wind tunnel which catches the lashing winds from the North-East, seems more resilient and forgiving, recovers quickly from neglect or harsh treatment and is a truly beautiful specimen – as a container grown tree I strongly recommend it. 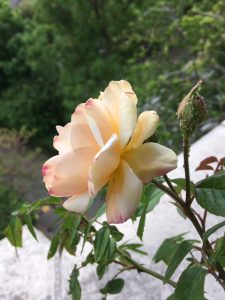 The jumbled planting of gaura, tall verbena bonariensis, lemon verbena now a metre high and mixed underplanting, interspersed with roses, is coming into being as a treasure trove for pollinators and a pretty (a word I usually avoid) display, although the compost is old and the planting scheme random.

However, the salvias look weary and may need replacing next year and I’m trying again with geums (Mai Tai to be precise), which I’ve admired from afar in other people’s gardens but never managed to grow successfully in pots. Too much competition I suspect may be part of the problem so I’m trying to offer them more growing space for now, but ultimately, like everything else, they will have to fend for themselves and try and manage with less.

Derek Jarman imbued hope and optimism into his gardening projects – I’ll take my cue from him.

The lockdown has, I know, been an opportunity for all sorts of creative initiatives. Mine are rather small scale and I am disproportionately proud of my efforts. A small table, a sheltered area on the balcony, a couple of sheets of bubble wrap and some clothes pegs and a roof-top mini greenhouse was born in the manner of Blue Peter. 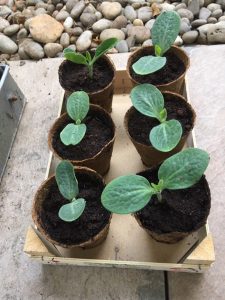 The seeds came mail order just as the final design features were completed. All available containers were planted either with butternut squash or sweetcorn seeds, both of which are large and so in line with my previously admitted limitations as a propagator of small seeds. 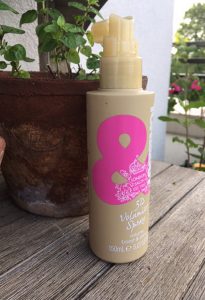 Benefiting from the exceptionally warm weather, and occasional misting using a re-purposed hair-spray product bottle, promising volume boost and shine, the butternut squash seedlings did well, tolerated being ‘potted on’ and then were successfully transplanted to the sun-baked allotment where they are happily installed and will hopefully continue to thrive. Last year’s crop suffered from a rather underwhelming amount of Summer heat, and being on the shady side of  the sweet corn, which grew tall. 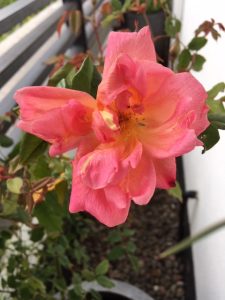 This year there have been lengthy discussions about the best planting lay-out for these late Summer crops, which need to be on the sunny side of the street with room to stretch out. Hopefully there will also be enough wind to get good pollination of the sweetcorn – not a complete success last year.

The flower strip is doing well with the first sweet peas in flower, and the battle against the mares tails (Hippuris vulgaris, not to be confused with horsetail) a score draw at the moment as regular hoeing and less frequent digging give at least an improved appearance although inevitably they will keep re-appearing until late Summer. The allotment is in walking distance of  the Thames which increases the odds in favour of the weed which likes mud flats apparently.

From Cradle to Grave – five stages of cistus

The reorganisation of the roof garden, in part to ensure better access for maintenance work (the last stage of essential leak repair work that loyal readers may remember has been something of a saga over recent months is due this week) also involved the pragmatic choice of replacing the two garden chairs with a bench.

Two occupied chairs with adult legs outstretched take up more surface area than one bench with two people sitting side by side, or so it seems. The straight backed bench can go right against the wall, under a canopy, facing out across the planting and long established trees to the church spire on the rise beyond. And more immediately is a perfect spot for sitting amongst the plants and watching what is going on.

Most eye-catching of all has been the spectacular display this year of the cistus purpureus, a particularly colourful rock-rose, with each individual flower a treat, the whole display spectacular and the Mediterranean plant, for once, enjoying Mediterranean temperatures, at least in the day-time. However, the end was inevitable as the shrub was elderly and straggly and ultimately could no longer support life. It had long outgrown its own life support system, a space limited terracotta pot, and as the last of the petals fell they seemingly replicated Millais’s depiction of Shakespeare’s Ophelia, with flowers floating on the water illustrating growth and decay.

Meanwhile the tallest of my Thalictrum plants is already as high as an elephant’s eye, and the ram-rod straight Verbena Bonariensis are too, and I will replace the cistus like for like whenever access to my local garden centre allows.

They call it easing the Spring: it is perfectly easy
If you have any strength in your thumb: like the bolt,
And the breech, and the cocking-piece, and the point of balance,
Which in our case we have not got; and the almond-blossom
Silent in all of the gardens and the bees going backwards and forwards,
For today we have naming of parts.