I’m surrounded by beautiful blossom, most spectacularly a wonderful Judas tree (less  memorably but more correctly known as Cercis siliquastrum) a lilac and a young apple with fading cherries, in various pinks, not far away. Perhaps just past their peak in this southerly spot, but the puffs of blossom have been a delight, both walking through the surrounding garden and on my weekly trips for essential shopping. However, most of the drama takes place down below. Looking straight out from my rooftop domain the only pink to be seen is in the blurry middle distance, all of which is a seasonal treat but nothing to compare with the display of Taihaku cherry blossom at Alnwick Castle. https://www.alnwickgarden.com/the-garden/cherry-blossom/

Once upon a time I tried introducing blossom on the balcony. My prunus Kojo-no-mai didn’t live up to its reputation, courtesy of the RHS, of being ‘perfect for pots’, and was finally drowned by last year’s ‘Beast from the East’, while blue berries without enough cross pollination (self pollinators don’t always do what it says on the tin) and a fruiting cherry, which grew too big for the balcony, and is now happily installed on the allotment, were also part of the failed project.

So instead I enjoy what’s round about and wait impatiently for the earliest summer colour to arrive. The scabious, scabiosa columbaria ‘Flutter Rose Pink’  http://retiringgardener.uk/2020/04/14/a-city-stilled/ to be more exact, forming the advance party.

But there are moments, and this is one, when this comfortable high level living, with the inevitable lurch from Spring to Summer (as container gardening doesn’t always manage easy, slow paced transitions from one season to another) doesn’t feel enough.

Cow parsley billowing in the hedgerows is what I yearn for but will be gone before I next cross the M25. Full of the promise of languid days, surrounded by soft and subtly different greens, accompanied by bird-song, this is where my urban soul meets the natural world most readily.

Meanwhile there are other opportunities to think about what it means to be human and our relationship with the natural world; this might be one worth exploring: 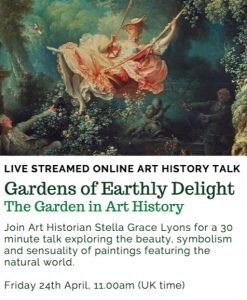 Into the fourth week of a lockdown, which in this city edge neighbourhood is apparently well observed: the restaurants are shut, the supermarket queues spaced out and the local garden centre closed, although occasionally a figure is seen wandering through the plants, tending and watering and hopefully keeping this fraction of the nation’s much needed plant stock alive and ready for sale when the time comes.

I am firmly on the side of re-opening nurseries and garden centres. The plants are needed for people and pollinators and I miss wandering and dreaming as I go through the seasonal displays.

Meanwhile the main ‘A’ road taking traffic from this South London borough into Surrey and beyond is largely silent, except for infrequent penetrating interruptions as emergency vehicles and boy racers on motor bikes screech past, accelerating through the empty streets. 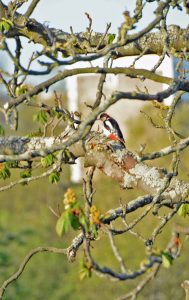 out far-away landmarks with the leaf canopy thickening as Spring becomes Summer.

Built in the Edwardian era, in the characteristic red brick of the period with some impressive ornamental stone features, the school opened in 1907. However, the original top storey was set ablaze by an incendiary bomb during the second world war, so schooling in the building was then suspended and the girls educated for a while elsewhere, going to different sites for different classes – joining the local boys’ school for science lessons and going separately to the nearby College of Art for art lessons. After a chequered post-war existence the building was later converted into apartments surrounded by a fragment of the original extensive school grounds and now with an industrial flat roof, all of which would presumably have come as a surprise to the original architects.

Lockdown in a flat with its own outdoor space and access to an allotment is indeed to be fortunate. Nevertheless there are complicated routines to be observed at the allotment site regarding locks and water taps (and the washing of hands) but reminders to observe social distancing requirements are largely unneccesary as self-isolating tends to be the order of the day.

The balconies on the other hand, while never being part of the original designs for the building, now offer a treasured opportunity to chat to neighbours across the dividing space, to ‘Clap for Carers’ on Thursday evenings or raise a glass as the sun goes down.

If you are interested in architecture and artists of the early twentieth century you might like to register for this talk by Stella Grace Lyons, one in her series of Stella Talks:

Did you know that when Charles Rennie Mackintosh died, his entire estate was valued at just £88. Glaswegian-born Mackintosh, a designer, architect and artist, was the foremost Celtic exponent of Art Nouveau, and had a considerable influence on European art. But he is an even more enigmatic figure today than when he was alive. Both Mackintosh’s and his wife Margaret Macdonald’s work has a distinctive character, one that captures the transition between the Victorian era and the modern age. This talk will consider both Charles and Margaret’s life, work and legacy.

How do I register? Here’s the Zoom link to register for the Mackintosh talk: https://us02web.zoom.us/webinar/register/WN_p16Kk8sXQ85E24nAXjkdJg

I’m always wary of giving gardening advice as it seems presumptious because, as I’ve mentioned before, I tend to know very little about quite a lot rather than having a real depth of knowledge about anything horticultural.

But I’m happy to pass on tips based on my experience. So 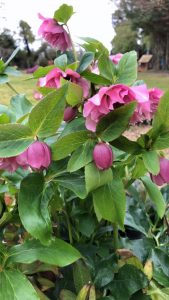 Unfortunately my beautiful hellebores are currently eleven miles away, lodging with a family member who has grown fond of them. A temporary expedient to manage the urgent need for access to the balcony, when rainwater was flooding the flat below, has become more permanent, with the current restrictions on travel and associating with others.

Tempting as it is to consider all my plants and containers as ‘essential’, I have plenty, many of which like me, have been enjoying the warmth of the recent settled sunny days. Indeed lingering on the balcony with secateurs or hose in hand has been a pleasure and everything is beginning to look particularly neat. Not a horticultural look I generally seek and the pleasure is somewhat surreal.

Meanwhile my heart goes out to gardeners who can’t be in their gardens, city families with no nearby outdoor space and the plant growers whose livelihoods are currently under threat.

I’m far too idle to grow things from seed (and of course the lack of a greenhouse is a perfect excuse, although there is the odd sheltered corner on the balcony) unless in child-like fashion the seeds are encouragingly large – peas being one such, nasturtiums another. I have been known to look at seed catelogues rather as I look as recipes, searching for the largest seeds or fewest ingredients, but now, at this moment in time, and against the backdrop of so much loss and uncertainty it is heartening indeed to see the peas sprouting and signs of renewal. 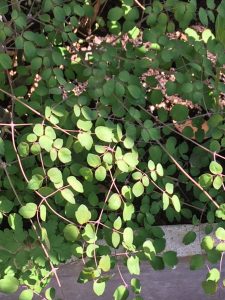 I’m also put to shame by Sue who pointed out in her comment on my last post http://retiringgardener.uk/ that because of the difficulty of finding thalictrum to buy, she would be growing them from seed. I am full of admiration and curiosity – my new plants (ordered early and safely arriving through the post) are growing apace so this evidence of a certain robustness might apply to the seeds too. It will be interesting to hear more.

Last season’s lemon verbena plants should be cut back by a third (or was it cut to a third) in the Spring and in time green shoots will appear. It pays to be optimistic, certainly at this latitude, as they generally do appear, although winter damage may mean that the plant is never a complete success.

The scabious have been out for weeks but the few tulips I have this year are holding back – true they are a late flowering variety but I’d quite like my container back and I’m now wishing I’d gone for an earlier flowering variety as the short sleeved sunny weather, with tulips still in tight bud, seem a rather curious combination. I’m also regretting buying tulips with variegated leaves which I don’t think I really like in this space-compromised spot. The strongly marked, white edged leaves of China Town, a pretty pink tulip when it eventually arrives, are overly prominent and eye catching and distracting, so a somewhat disappointing experiment.

The much admired and ever larger rosemary is losing its flowers, which is a shame as the bees are out and about and with my best hellebores miles away I haven’t got much else on offer for the moment, although the ‘Cornish daises’, with the unmemorable name of Erigeron karvinskianus are coming in to flower.

So too are the smallest, daintiest of the thulbaghia, another plant with ‘wafty’ lavender pink flowers. I have three varieties, the largest being Thulbaghia Violacea. They are generally tough and as long as you water them and feed them, but not too much, they will flower right up to Christmas. However, I may have pushed my luck with the Violacea. The pot and plant were bound together and the clump urgently needed dividing so having borrowed a spade from the allotment, with a struggle what was once whole was divided into quarters, with two small clumps re-potted. This may be a misnomer as I had miscalculated and didn’t have nearly enough compost of any quality to cover the roots. So I have an inadequate arrangement with the limited supply of compost mounded up in the centre of the two large containers, more or less covering the roots, which I water daily, with a large gap round the margin of the pot waiting to be filled with compost – a doughnut in reverse.

There are things to be said for gardening and living at a slower pace, but impatience, as I’ve discovered, can problematically fill a vacuum.

Meanwhile I’m looking forward to the blowsier plants of summer. The Lysimachia atropurpurea have already doubled in size and are looking promising among some elderly salvias which needed a bit of cheering up. The roses are looking healthy and contrary to the concerns about growing in pots continue to accept their relatively cramped conditions and are emerging shiny leaved and ready to flower, while honeysuckle and clematii are almost ready to burst into flower, prompted by the recent warm weather.

All of which is in marked contrast to the agonies being endured, and the heroic efforts being made, elsewhere across this quiet city.

Thank you for all your messages and comments.