The annual drumbeat of greater spotted woodpeckers advertising their presence and excavating the ancient, and arguably dying, horse chestnuts facing the balcony, began early and has continued through the morning. The search for insects and other food prompts this regular migration from the densely wooded areas not far away to the gardens and trees round about. This species is described as having ‘a huge range and large population with no widespread threats, so it is classed as a species of least concern’ by the International Union for Conservation of Nature (IUCN).

If only the same could be said of Covid-19, that like the woodpeckers evidently now has a huge range and no widespread threats, and is increasingly a very great and grave concern, which one way or another is beginning to affect us all. I feel fortunate to have a green space of my own, and the balcony I’m sure will be a place of refuge in the weeks ahead, while familiar certainties, and time with friends and family, are for the moment suspended.

Spring days, and longed for long hot summers, are also for me a poignant reminder of the passing of time, accompanied by an aching sense of sadness and loss, alongside the joys and  delights of warm evenings, summer scents and happy times. This year, or so it seems at the moment, I will have the time and opportunity to take care of the pots and plants while reflecting on these alarming times with escalating measures to manage and ameliorate the health and financial consequences of the coronavirus. Meanwhile we learn that as the virus spreads, and traffic stills, air pollutants and CO2 levels both show a significant drop. 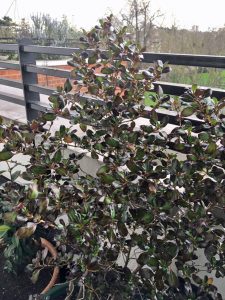 At the height of the recent, but now rather forgotten storms, our neighbours left London and left me the pick of their plants to add to my collection. Another olive tree, and a particularly nicely shaped dark purple-bronze pittosporum, were the first to make the short journey from one balcony to another where two of the four ball topped steel stakes I recently acquired are ready to lend support.

Generosity takes many forms but at this time of year I am indebted to the person I share my life with. The main terrace leads directly off the main bedroom which sounds much grander than it is, but in the absence of a shed, side paths or whatever to store pots, bags of compost, grit etc, which I’ve been amassing for the planting season ahead, the bedroom has to act as an antechamber and temporarily or more permanently houses things heading for the terrace.

Currently it is mostly a question of bags of crocks, but recently included bags of horticultural grit which I left too long on the carpet and they leaked. At other times the horticultural smells of compost have mingled with the rather more synthetic smells of shower gel and shampoo from the en-suite.

All this is tolerated without a murmur.

Meanwhile on the allotment, the plan had been to make space for a ‘shed made of glass’ for the visiting nine year old who hadn’t come across the word greenhouse, but is nevertheless very keen on growing from seed, and is developing into a knowledgeable and enthusiastic gardener. In the past he has wondered why the family plot doesn’t make the ecological contribution, as well as offer the enchantments, of its own wildlife pond, and more recently raised the question of emulating the neighbouring plot and getting a greenhouse. It is unlikely to produce the wonderful crops of tomatoes that he’s been hoping for, as tending the allotment generally has to fit in with other demands and pleasures, so is inclined to the erratic at key moments in the summer (watering in August comes to mind) which is never a plus when growing veg. In the interests of health and safety the intention has been to look for polycarbonate ‘glazing’, but a shed made of polycarbonate is a bit of a mouthful so we’ll probably carry on referring to glass.

All this is of course on hold while family generations need to keep apart.

My conversational French can give the impression that I am much more fluent than I am. So too with gardening – my enthusiasm can be mistaken for learning by those knowing less than me. However, being faced with questions or conversations which expose the fragility of my gardening knowledge does not necessarily stop me making suggestions or giving advice, perhaps not amounting to ‘a very dangerous thing’ but  probably unwise and maybe unhelpful.

This tendency to fill the gap came close to being my undoing many years ago, when applying for a university course involved filling in an UCCA form, a forerunner of the current system. A surprisingly large amount of space was given to hobbies and interests, but describing my general interest in the theatre and visual arts (based in truth and demonstrating, I hoped, a certain well-roundedness since I was applying for a science course) only filled half the space, although looking back I’m sure I could have expanded on my descriptions of some of the wonderful theatre productions I’d been lucky enough to see, and the impact they had had; Vanessa Redgrave in ‘As You Like It‘ being at the top of the list.

Instead I resorted to being somewhat economical with the truth, and chose to expand my recently acquired skills in the art of fencing into an account which suggested more talent and skill, as well as success, than I could justify. One of my interviewers turned out to be a keen fencer and was involved in organising fencing competitions for schools and young people. Enough said. 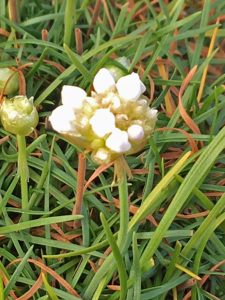 Gardening is one of the few occupations which can keep, more or less, to a familiar, ordinary, tried and tested time-table in these extremely testing times – and at this time of year, as early summer flowers emerge, seeds need planting, shrubs need tidying, plants need feeding and designs need planning. The latter being a particular favourite of mine although as yet I’ve never managed to bring into reality the scheme in my imagination, largely because I am always swayed by what is in front of me (in a nursery or garden centre) so go for the spontaneous purchase, or am undone by a significant gap in my horticultural knowledge and so plant the wrong plant in the wrong place.

It is sunny now after an exceptionally wet and windy Winter and early Spring, with ominous grey clouds never far away, although with alluring intervals of sunshine and blue skies more recently that for now are seemingly settled. So having spent seemingly weeks trying to avoid the cold and rain by sheltering indoors (now of course largely confined for other reasons) I have been scheming and shopping, both on-line and at nearby garden centres too, while trying to restrain the temptation to order more than I have space for. Largely going for familiar plants that seem to be happy with high-rise living I’ve also avoided too many ‘pops of colour’, never something I’ve mastered in this limited space, or to be honest, elsewhere. 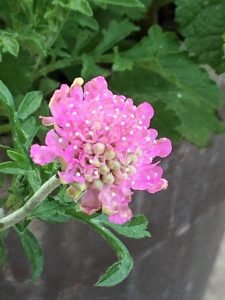 However, this annual ritual, buying seeds and plants, clearing away Winter debris, re-discovering the garden (or in my case forgotten pots) feels very different this year as the daily pre-occupations of the required restrictions, with the accompanying toll on well-being and livelihoods, dominate the scene. Local garden centres are for the moment open for people to shop one by one, and if this continues I will consider myself lucky indeed if I’m amongst those who know someone who is able to get some supplies which I can make use of, and enjoy, in the absence of family and friends.

With no opportunity, even under ideal circumstances, for expansive drifts of planting, unlike the generous acres of Jimi Blake’s garden, south west of Dublin, which as yet I have only seen in snapshots through the TV lens, his planting remains to me ‘such stuff as dreams are made on‘.

Visiting Hunting Brook Gardens  http://www.huntingbrook.com/ is on my wish-list although like so much else will have to be deferred until travel plans can be resumed again. Meanwhile as a nod to the countless Thalictrum plants that have been, and may still be found in his gardens (although I’ve read that Jimi Blake, who comes across as a restless spirit, changes his planting plans whenever he feels inclined), and are a feature of Hunting Brook, I’ve gone for broke and ordered a few. The original plants suffered badly in last year’s emergency balcony clearance, after a wonderful summer when they scaled great heights. The replacements will be particularly appreciated if they ever arrive, and if not, another time.

Lorries may be requisitioned for other uses and in the current emergency, flowering plants might understandably be considered decorative rather than essential supplies, although the plight of pollinators could be considered a greater, or certainly longer term, emergency.

The school playground next door has been silent except for a few children playing table-tennis and kicking a ball to and fro outside for a while, presumably the sons (no daughters today) of our local key workers.

And the familiar queue of aeroplanes overhead has gone for now.

Meanwhile, since January we have been eating purple sprouting broccoli from the allotment – a bumper crop which is still in production but I had begun to grow weary of.  However, it now seems fortunate indeed to have had a freshly grown crop which we can enjoy and leave on the doorstop of one or two close friends and family as we pass by.