Not Quite a Potager, more a Collection of Pots.

The elements are here on the balcony – fruits of different sorts (a fruiting cherry looking happy and healthy having come through it’s first Winter), strawberries looking incredibly eager to go forth and multiply and the olive trees promising another year of fruit, which although too few to put through the complex process of curing and frementing on their own in order to become edible, could be taken to a co-operative if I find one ready to receive offerings later in the year.

With global warming, or perhaps changes in cyclical weather patterns, the olive line now stretches northwards across from Oxford and beyond, although in truth not necessarily  producing fruit. However, I once heard tell of an exterprising horticulturist who applied to the EU for an olive subsidy, the details of which now escape me. Being essentally honest, and living (from memory) perhaps in Doncaster, he applied on behalf of something in the order of a dozen or so trees, but the incredulous administrator, with limited knowledge of the weather patterns in the north of England, converted the units to thousands, and so a fortune was apparently made, or at least the possibility was created. 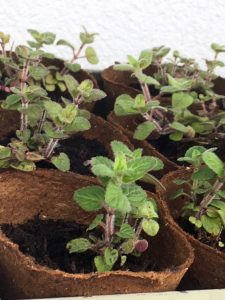 ile I am managing to grow plenty of herbs, including bay, but as this is the only plant I’m trying to train into a formal shape (also a characteristic of French potagers) I am ambivalent about random culinary pickings, so my prunings will have to be kept for later use. Otherwise chives, sage, parsley, rosemary in abundance, thyme, lavender and oregano. Oddly no mint, so something to add to the shopping list.

As I have previously explained, amongst my favourites is wild marjoram (oregano)  which isn’t always easy to come by in city plant centres. Having found some on-line late last summer I was pleased to fill that particular gap in my plant list and was careful to find a sheltered spot to help the juvenile plants overwinter. So I was disappointed and annoyed with myself when I realised that none had survived due to my carelessness. I had forgotten that the downpipes from the extensive roof above are bizarrely designed, since having done their bit to take the water off the roof, the system relies on the gradient of the terraced area before rainwater is channelled on further down. This means that cold winter water lingers around for a while in some sections of the balcony after heavy downpours, and placing pots of marjoram in the flood-plain was evidently a mistake, now remedied with more plants from the same supplier.  I’ve learnt my lesson and have put the new arrivals in elevated positions, at least for the moment.

I can’t claim to having any vegetables, and the plant collection is a combination of plants familar in southern England and southern France, or both. Clematis do well, roses for a while, so too the expanding collection of tulbaghias which look rather Mediterranean but come from South Africa and like the extremes of temperature, with high winds and good light levels that the balcony offers. I just need to keep watering them.

Casualties of the Storm

I have begun the growing season well with plenty of cutting back, feeding, watering and planning all going ahead. The intention being to reduce the number of trip hazards, have fewer containers with more impressive and better nurtured contents (all of which 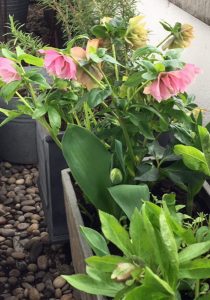 involves doing my homework which has never been my strong point) and keeping to the overall plan for the year ahead. Plants that are obviously dying have sometimes reluctantly gone (the reluctance of course being mine not the plants), some containers have also gone or been re-cycled as crocks and as ever I have had to relinguish some hoped for additions to the planting as the wind and weather have taken their toll. Rather satisfactorily, however, a small bush honeysuckle, which has never enjoyed its restricted existence in spite of being ‘suitable for container growing‘, is now happliy re-cycled to the allotment ready to do its bit to attract the local pollinators.

I’m intending too, to limit the amount I spend on the balcony as the cost per picking of thyme or parsley far exceeds the price of a supermarket packet – but on the other hand unlike ‘our friend in the North’ I never intended this to be a profitable enterprise although learning from my mistakes sometimes proves rather expensive.

‘Faux’ shabby can be rather expensive too and without the charm and history of ‘real’ shabby, neither of which can be found in great abundance amongst my semi-industrial pots and spaces up on high, sheltered from the weather by the creaky factory style roof above. Actually I’m rather tempted by both faux and real shabby from time to time and always hankered after the careworn wooden table that had once been part of the outdoor furniture of my childhood. Many moves later, and with much of the other furniture finding new habitats over the years, the old table, layered with paint, and with geraniums atop, found its final resting place nestled into my father’s last garden.

Garden sheds still evoke Proustian memories of a particular musty smell, conjuring up summer warmth and horticutural debris. The allotment shed is rather small, so difficult to actually get inside, and the door stays open to the elements while work is going, on so no accumulated sensory legacy. However, at home the whole operation has moved indoors. Lacking a shed, still less a greenhouse, the kichen draining board has to do and as there is a certain amount of space on top of the kitchen cupboards for seedlings amongst chitting potatoes, house plants and various objets d’art, with a large skylight giving ample light, it doubles up quite successfully as a work station.

Ma or the Space Between

Willing as ever to be educated by Monty Don I have learnt a bit about the importance of the space between things, Ma, as in late Winter he tried to explain the mysteries of Japanese gardens and the governing philosophy. However, I’m struggling.

Ma is a Japanese word which can be roughly translated as gap, space, pause, or the space between two structural parts with the word ‘space’ suggesting or conveying ‘interval’.

I’ve always been unsuccessful with maples, in or out of pots, and am now rather troubled by recollections of the time a Japanese student spent a year learning English while living at the top of the Victorian terraced house, with long thin garden, that was home at the time. It was a bit of cultural shock on all sides, as the emphasis on neatness and formality even extended to plates of beans on toast, with the beans arranged in neat order one side of the plate and triangles of toast on the other. So the principle of Ma was evident there too and I have never forgotten my shame as any meal I prepared lacked the elegance and restraint she modelled but I still find so difficult to emulate.

The garden she looked out on, while helping with the washing up in those pre-dishwasher days, was a typical mixture of straggly shrubs, patchy lawn, wobbly fence and an assortment of pots outside the back door. All very different from the gardens she would have heard of, and perhaps visited, while growing up in a high-rise flat in Sapporo, a cit 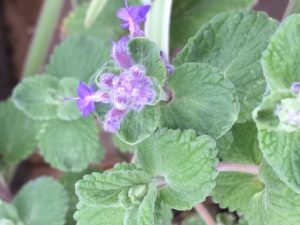 y in Hokkaido the nothernmost of Japan’s main islands, known for it’s volcanoes and hot springs. On her part she was full of wonder at the summer day length, which was to her as unexpected as the domestic informality she encountered, since at 43 degrees N Sapporo has much less seasonal variation in day length than London at 51.

The bamboo parasol, a lasting legacy of her stay, still lingers near the front door, and is an endless source of fascination for the visiting rising nine year old who will soon have arms long enough to open it out on his own. I’m also rather pleased that at this late stage I’m surprisingly allowing something of her cultural heritage to permeate my thinking. Last night I threw away a superfluous bird feeder in yellow plastic that has never attracted any birds, and so was a phoney boost to my commitment to bird feeding. Surprisingly, there was immediately a greater sense of space, as for the moment at least, there was a bigger gap between the honeysuckle branches so revealing the Surrey hills, remarkably different from the dramatic snow capped mountains of northern Japan.

As I’ve tried to explain previously, this really is a scaled down enterprise with gardening at the level of the individual plant, and yes, removing one single eye-catching object has curiously made a difference. The options are to take one or two strides to the right or to the left after stepping out onto the terrace, and even these have to be shortened in high summer when the containers are overflowing. Then you are up against an array of pots carefully staggered in various ways, both into the space and vertically wherever possible. But for the next few weeks, before the surrounding trees knit together in a dense summer canopy, the view through the emerging shimmering early leaves to the edge of the hills beyond, is really rather magical.

Meanwhile although I’m not up for the dedicated and aggressive pruning that Japanese gardening requires I am hopeful that as the bay tree grows up, together with the sweet box now smelling spectacularly, there will be a greater sense of space at ground level. No raked gravel underfoot but seeing more of my carefully sourced beaten-earth toned tiles would be a bonus.

Notes from a particularly small garden

Anyone travelling into west Wa 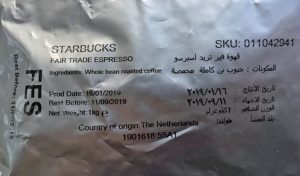 les, and stopping for coffee at one of the familiar multiple coffee shops along the motorway near Bridgend, should look out for the free bags of used coffee grounds ready to be picked up, recycled and added to the compost bin. 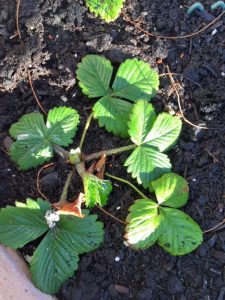 Sadly lacking a Spring green canopy of trees of my own I’ve finally admitted the obvious, that my growing conditions are more Mediterranean than middle England and so unsurpringly it is the olives, rosemary and eucalyptus than can keep going through the Winter ready to profit from the exposed, sunny conditions the rest of the year.

And as we all know there is no such thing as a free lunch – or maybe even reliably hot free Serrano chilli plants.  A cousin who last year planted the free chilli seeds she acquired with the bill after a Mexican meal, has been disappointed to be producing bland chillis, rather than the fiery hot variety that was promised. All chillis need heat (in the sense of high ambient temperatures) to reach their maximum culinary potential but this should be feasible when grown behind glass or in a poly-tunnel in sunny southern counties. It’s been done to spectacular effect by a Bangladeshi restaurant owner in Newcastle Emlyn, Carmarthenshire, I seem to remember from an earlier episode of Gardeners World.