No Christmassy scenes at this city edge – wintry in the sense of wet and windy but nowhere locally is very deep and crisp at the moment. It may yet happen but for now the problem for travellers and wild life is largely the excess of grey, misty weather and bouts of rather miserable rain.

Bizarrely, an unexpected noise from above earlier today turned out to be a sea-gull, apparently licking (if birds can lick) something off first one, and then the other skylight, which offer very welcome additional light at this time of year. Nothing obvious, certainly no remnants of pasties, the favoured food of the West Country sea birds that thread through my life at different moments. Although thinking now, perhaps the glass skylights were serving as a make-shift dining table for food remnants snatched from the dustbins below.

More conventional feeding stations have been much on my mind alongside conventional seasonal offerings, including mince pies (fine in small quantities), smoked salmon (delicious) and sprouts (to be avoided). But the feeding stations that are uppermost are the bird feeders that if not cleaned regularly, may be a source of avian infection. I am now armed with an appropriate spray and a determined attitude to improve food hygiene on the balcony, but an accompanying concern about yet another plastic container arriving chez nous.

All this in the same week that I had lunch in an elegant restaurant with an old friend. Since enquiries about allergies have become de riguer when food orders are taken, in this case by a somewhat over solicitous waiter, we subsequently began to wonder about the cause of the up-rise in hazardous peanut allergies and the association, or perhaps blame, laid at the door of contemporary life and its excessive attention to cleanliness.

Hard to get the level of hygiene right.

The year has turned, the days are getting longer again and last year’s flowers are continuing to offer up a display. And what do I feel, or even think about pelargoniums and hardy geraniums still displaying their colourful wares in this small, informal, fragmented and sometimes experimental roof top space, somewhere between an overgrown window-box and an opportunistic terrace?

Since a roof garden doesn’t offer even an illusion of permanence and history, unless a plant is passed on and subsequently planted elsewhere with a chance to settle (and I am discounting elegant roof terraces with neatly clipped, well behaved evergreens) transience and change have the upper hand. Pots are readily moved and failures can easily be learned from, or not. Everything is more or less in reach so restraining or encouraging, clipping and cutting back, watering and feeding are all on the whole very doable, while the seasons, too, can be masked as sheltered micro-climates continue to support late flowering roses and all year round growth. Even occasional flurries of snow are given minimal opportunity to settle. On the other hand, the opportunities to return to the wild, although tempting and plentiful, may also need restraining as roof liners can all too easily give way. Although I suspect an over enthusiastic self-seeded buddleia may be much happier than one of the species specifically adapted for containers, all too soon water penetration below may be its downfall in every way. From memory, and perhaps from the BBC series ‘The Forgotten Planet’ London would return to forest within 50 years if no repairs were ever done.

However, there is no lasting legacy so these temporary spaces with their portable histories and unpredictable futures need to make the most of the possibilities while they can. And they are. Hereabouts the balconies and roof gardens which have sprung into being in recent years have also more recently sprung into life – plants, containers, bird feeders and occasional bikes are to be seen as spaces of all sorts are greening up. Expensive specimen plants, colourful plastic window boxes and associated impedimenta are now to be found along the southern reaches of the District Line. I rather welcome the absence of bare twigs (which most gardeners will recognise as a sure sign of winter) in the built environment as I gaze out in dwindling light from a passing train; the full force of the season being temporarily modified and moderated as I pass by.

Meanwhile tits of all sorts have taken over the feeding stations on the balcony and long before I could change my phone to camera mode I briefly spied a great spotted woodpecker snatching a meal from the peanut feeder. Redwings also spent a few days nearby as they passed through on their way from Scandinavia, but sadly ignored the apples I was encouraged to leave out for them.

Pelargonium leaves still weigh down the mother plants, and their flowers continue to struggle on, but in truth it’s time for last year’s efforts to be put to bed and space given to Spring and the year ahead, however remarkable their efforts are, even in this relatively sheltered spot.

Photos capture all sorts of moments including the changes in the weather, but the biting winds at this time of year often go straight through the branches of the horse chestnut trees opposite, leaving them undisturbed like a ghost in the night.

The day began well with an unexpected donation and surprising momento of lunch with a friend. My freebie had the initial appearance of a packet of matches, so predictably aroused my ire. So much for my mistrustful assumptions – appearances can be deceiving. The ‘sticks’ are an enterprising way of distributing chilli seeds which can be easily inserted into a pot of compost, watered regularly, kept warm and passed on in time, since chilli plants are very obliging. The Wahaca restaurant encourages photos of chilli plants to be shared on #WahacaChilliGrower so setting up a virtuous circle with advertising, chilli growing and good eating all benefiting thereby ‘reclaiming the city one chilli plant at a time’. One omission might be the absence of any mention of the Scoville heat scale. Since I don’t know how hot these particular chillis are likely to be I will proceed with extreme caution, while enjoying their decorative potential. A high kitchen shelf, well lit through the larger sky-light, and currently occupied by a number of house-plants, could soon be home to a few more.

Having looked more carefully I have discovered (in very small print) that these are the seeds of Serrano chillis with a score of 10,000-23,000 Scoville heat units, so possibly best kept for their ornamental rather than culinary qualities – but I hope in time to be able to offer the seeds to anyone with a greater appetite for chilli heat than me.

In contrast a brief mid-January visit to the allotment was a reminder that a solitary echium in a flower strip, away from the warmer climes it prefers, is rather a dismal sight. In Cornwall where they flourish and propagation is a question of capturing the many-fold seedlings to put in pots (which can’t always be given away) I am told they can also sell for £20 each, rather bucking the usual economic mantra of supply and demand. I’m not sure I have any prospect of any seedlings to sell later in the year, but if I do I’m also uncertain of their market value in Southwest London where gardens are small and order generally preferred.

In the meantime the green shoots that I am noticing in various planters among the less easily identifiable horticultural life, are beginning to expand into juvenile Spring bulbs. They have, at least in theory, been strategically placed to have maximum impact when viewed through the south facing windows while safely in the warmth of the central heated world indoors. Mostly tulips and a few narcissi, but on the whole the tulips win hands down. In small numbers the variations of pink flowers, from the palest to the most vibrant, can make an impact in much smaller numbers than bulbs that are closer to their native ancestors and often at their best in woodland settings.

Fritillaria meleagris, Snake’s head fritillary, which I grew successfully for a couple of years (a fluke maybe) failed last year so for now I will leave them to the Oxford meadows which I can’t really compete with.

Winter has now been and gone. A few days of sleet, some snow underfoot and an absurd moment when vanity triumphed, albeit briefly. Fed up with boots and an evening meeting to attend I wore some new(ish) leather soled shoes which had no resistance against the icy conditions that the Met office had accurately forecast. Humbled, I was rescued by a friend.

The long awaited sweet box, Sarcococca, is coming out into flower and when the sun is up I hope the scent will be too, although the wind may claim it first. The hellebores have also come out in season this year and will hopefully linger awhile and an unnamed succulent seems quite happy in spite of the oscillating conditions. More anxiously I am wondering about the witch-hazel which may prefer more shelter and the cherries, which have yet to reassure me that I know how to look after them. 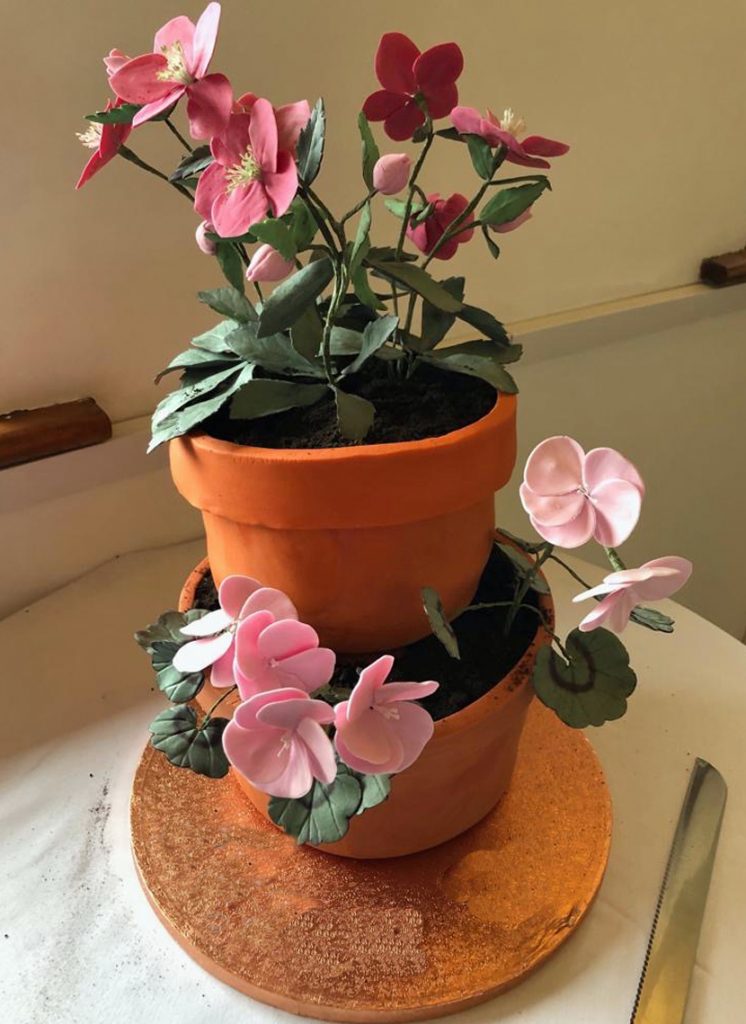 Herbs of all sorts, on the other hand, do very well but like the astonishing, elegant and delicious birthday cake that looked much too wonderful and good to be eaten (but was), selecting herbs to pick can involve negotiating the fine line between losing their beautiful form and gaining a culinary contribution; I tend to go for form as exemplified above by my ridiculous choice of shoes. Some readers may remember I have history when it comes to wearing expensive, inappropriate shoes when gardening or venturing outdoors.