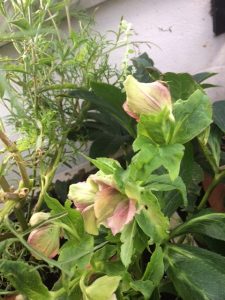 With the summer, retirement arrived with all its associated anxieties and uncertainties, as well as a chance to muse and reflect on my garden and gardening. Keen to learn from others who are also gardening ambitiously in rather unlikely high rise situations, where ingenuity is often needed, and with the hope of doing a little bit more to green up the urban sky-line, there is an opportunity in this transitional year for working to give way to writing, and for gardening to have more space, at least in my mind, as this new season in my life begins.

August, the time of school holidays, late summer flowers, lingering evening light and early wasps should not be a time for hellebores, or Christmas roses, to be in flower. But next to the lemon verbena and other herbs and flowers much better suited to warm summery conditions, in this rather unsummery summer, they have come into life and flower in some of the containers, protected as it happens from the worst of the wind and wet.

Then, to compound the uncertainty of the seasons, a month’s rain fell in one day and a downstairs neighbour’s ceiling collapsed, so the year’s carefully planned planting with delicate flowers mixing with silver leaved Mediterranean foliage, had to be rapidly moved aside as surveyors and workmen arrived in force to search for the leak. 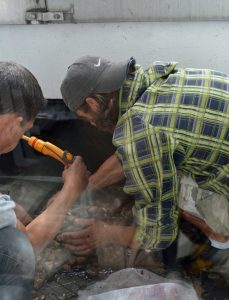 Once found and temporarily repaired, and with the dismal news that further works would be necessary, it soon became clear that there would be no question of putting things back as before. Some plants have been damaged in the frantic haste of the move, others cannot now be as carefully tended as they need to be, jumbled t 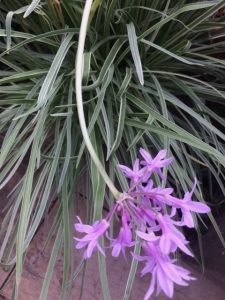 ogether and out of reach, and the whole of the walk-way leading to and from the main terrace needs to be more accessible. This translates into fewer plants and containers or differently arranged plants and containers, so after the initial disappointment and the loss of a much loved, favourite scheme things will have to change.

However, without the certainty yet of a date for the return visit of the workmen, planning ahead for any new scheme for the terrace has stalled and even the arrival of spring bulb catalogues and other temptations prompted by the gardens around have failed to prise me out of a malaise, maybe helpfully, while new ideas have a chance to germinate. 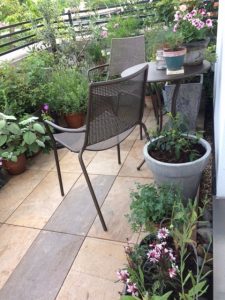 A cousin once pointed out that I don’t like mud – odd for a gardener, so perhaps not surprising that I now find myself gardening on a terrace where the ‘mud’ is contained in pots and which is more or less the same size as my formative gardening experience. Under the watchful eye of our wonderful gardener, who would have had the chance of further education if born later, and if born earlier would have avoided the horrors of four years in the trenches of the First World War, as a little girl I diligently and patiently sifted soil until fine enough to sow seeds for a summer display.

Less patient now, and with time more pressing I have always demanded a lot from the sunny, south facing, wind battered main terrace (2×10 metres), which has included old olives carried up 95 stairs by a removal team as if their weight was inconsequential, old roses, clematis, honeysuckle (a new arrival), surfaces with seasonal planting and containers full of sometimes ill assorted neighbours adjusting to less than ideal conditions, but providing a succession of assorted blooms year after year. Underwatered, overwatered, underfed, overfed they have nevertheless rewarded me, generally, with a constant source of pleasure and interest, including the unexpected – how to explain flowering hellebores in August? But now there is a chance for reflection and perhaps attempting a new approach to the challenge of the aggravating wind.

Harsh winds can approach from any quarter except the north-east, and sheltered spots are limited, so it is a challenging space for insects and other wild-life although bumble bees are reliable visitors from early in the year. Other pollinators arrive later and this year lady-birds in large numbers, hopefully not including the unwanted foreigners. Most intriguing were a pair of wood-peckers (greater spotted I am told) who regularly came to the bird-feeder one after the after, never together, for two or three weeks in early summer. It seemed that they were drawn by the sound of minor scales and arpeggios being played on the clarinet by the open window, but maybe this was a chance association. Tempting also to think they wanted to form the percussion section as their drumming could be heard after they returned to the woodland cover. 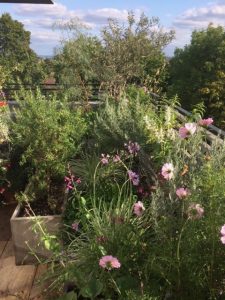 Since the olives thrive and look good all year round (although I am too cowardly to prune them in case I get it wrong) perhaps the well established standard rosemary which had been obstructing the walkway, making watering difficult, could now be enlisted to add to the wind-break. Function nearly always gives way to form in my schemes so I am willing to forego some of the recommended planting ideas for wind breaks, such as bamboo, as it would seem out of place in my high rise cottage style garden, and I have never really taken to it anyway. In place of the rosemary on the walkway I am tempted to move centre stage a small eucalyptus (eucalyptus nicholii) which I first came across in the Chelsea Physic Garden and rather audaciously thought I might grow as well. Thanks to the internet it was quite easily found and is happy enough in a sheltered aspect benefiting from the warmth of the building, is unusual and if the winter is not too harsh will provide an island of continuous silvery green. 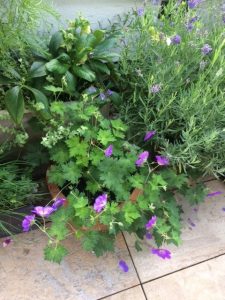 All this will, however, have to wait until the repairs are completed, access to all areas is feasible and the plants and pots that have not survived are taken away. But as August gives way to Autumn the intimations of another flowering season have already begun and I have found myself considering new additions to the green fringe surrounding the smaller containers and underplanting.