A friend, himself a serious and very knowledgeable gardener, once told me that he thought that gardens begin to look weary after seven years or so and then need a fundamental overhaul. For us the ‘overhauling’ has been largely out of our hands as one by one the row of elderly trees that protected the balcony from the fiercest of the sun’s heat, or the winter winds, have died back and been removed. Other mighty trees: limes, London planes and ash still circle us but not with the intimate connection and protection that first attracted us to high rise living atop a converted Edwardian school on the Southern edge of London, which for a number of years now has been home.

The outdoor space, not quite a roof garden, but a more extensive and irregular surrounding planting opportunity than a balcony, has had to keep up with the times and as the micro-climate has changed, so has much of the planting. But not all. Below the level of the brick parapet life has continued largely unaffected by the absence of the ancient trees, and comes and goes with the seasons with herbs, including wayward rosemary and lemon verbena, lavender (not very successfully in spite of helpful advice gratefully received) and other perennials and small shrubs taking turns to attract the bees and catch my eye. 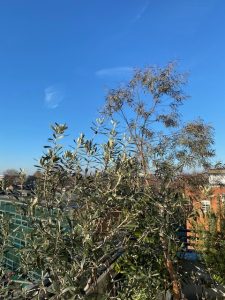 Above the brickwork the sturdy railings have provided very necessary secure anchorage for the larger shrubs and small trees that I am now hoping will provide some privacy and shelter for this exposed site. The small eucalyptus, E Nicholii, which I plant in large containers quickly spin out of control in the wind unless tied down, whereas the olives stay put in fair weather or foul, presumably because although both trees are silver evergreens, the leaf and branch combination is less susceptible to gale-force conditions and doesn’t have the same propensity to act as a spinnaker catching the prevailing wind. I’m on the lookout for any large shrub/small tree, preferably evergreen that will tolerate high Summer temperatures and Winter wiles, as I’m in danger of heading towards a mono-culture up aloft with olive trees, which I love, becoming the over-dominant species although they will always have stiff competition from the abundant and equally happy roses.

Meanwhile on a rather frantic pre-Christmas shopping trip to a local garden centre, 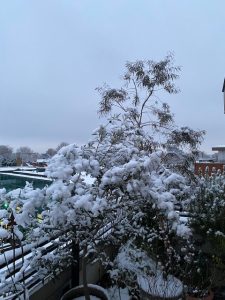 I was surprised and delighted to come across a  pomegranate for sale in amongst the taller shrubs and next door to the pyracantha (it took me a while to work out that they were displayed alphabetically). It was well over eight feet high in its pot and more columnar in habit than those I’ve seen growing in the South of France and beyond, which was reassuring as the juvenile one I planted last Summer, close to the warmth of the building and as sheltered as I can manage from the extremes of the weather, will also be columnar it seems.

I keep reminding myself that craggy Greek slopes are snow covered in Winter, and baked by the sun in the Summer but I still feel I’m expecting rather a lot from my expanding selection of Mediterranean plants.

Advice from the Experts

I support the RHS and enjoy reading (or dipping into) ‘The Garden’, which as with all magazines arrives with contents that are slightly ahead of real time – it seems a bit early in the year to be thinking about planting aeoniums, but no matter, there is much to learn, including experts’ suggestions for evergreens to beat drought, and a preview of Cleve West’s garden for Chelsea, designed to support the charity Centrepoint. As its name suggests ‘365 days of bees’ recommends nectar-rich plants to grow in the garden throughout the year for visiting bees and other pollinators, although it might be more of a challenge to find plants for pots for the balcony that can provide such a consistent supply of nectar without help from the garden below.

It was 3 degrees outside the bedroom last night but nevertheless I caught a glimpse of a bee heading back from the flowering rosemary late morning when presumably it was a little warmer.

‘Bird on the metal railings’ With apologies to Leonard Cohen 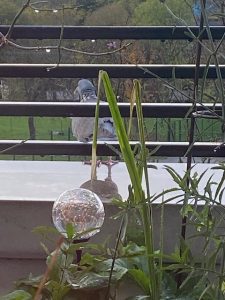 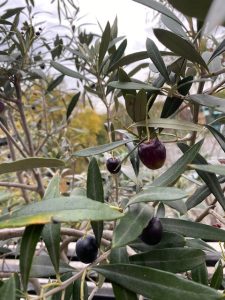 By agreement with our fellow residents the pleasures of feeding visiting garden birds, and watching the tits and robins outside the bedroom window were relinquished by us and others pre-pandemic as the feeding stations had been taken over both by feral pigeons (with all the accompanying problems for us and our neighbours) as well as their country cousins. So now visitors are fewer and come more opportunistically in search of food or water. A robin this morning and yesterday a large thrush, possibly a fieldfare I wondered, but lacking both the necessary knowledge and chance to take a photo I’m not so sure. Another photographic opportunity I missed, which was way out of range of the security cameras below, solved a problem I was curious about a few weeks ago when it was still quite mild although Autumn was already giving way to Winter.

Three of the four olive trees I have around and about produce a surprisingly generous crop of olives which turn brown and lush before dropping to the ground as the weather turns frosty. But the most prolific tree, with the fattest olives, seemed to be losing its fruit prematurely, although I couldn’t find any on the tiled surface underneath. Eventually I saw the culprit, a wood pigeon with a large olive in its mouth. The thief returned daily for a while, slightly varying the time, but always at a moment when my phone/camera was out of reach, and only stopped when it had taken all the olives on the far side of the tree, away from my prying eyes and the building. I’m actually rather fond of wood pigeons but I now recognise that I take particular delight in watching my olives grow and swell with pride pari passu.

(More than once I have been criticised by close friends and relations for introducing archaic Latin phrases or obscure plant names into my posts – anyone who read an earlier post  explaining the misfortunes of my Latin education might be particularly surprised that I still cling on to the vestiges of my fragmented grasp of Latin and then show off in this unnecessary way. I’m also aware that I could do more to investigate the olive collective that welcomes Londoners’ olives and in turn turns them into saleable olive oil – a virtuous circle but I might need to be in a position to offer rather more fruit before my contribution would be welcome. I can find out.)

The cover of The January edition of ‘Gardeners World’ magazine signposts what is featured on the inside – ‘Grow and save – how to save £££s by growing your own food’.

Our problem has often been how to avoid increasing the cost of each bean grown by various extravagances; replacing elderly tools, allowing the weeds to gain the upper hand, losing track of seed packets etc. So I will read on carefully. We have already decided that planting more of the crops we enjoy eating, which store well and can cope with some neglect is probably the best way forward for us, but we need to improve our storage facilities as a rather damp shed and family members’ bedrooms and garages are not really a sustainable addition to our overwintering arrangements.

Meanwhile we are still eating our own butternut squash and onions and have only just started buying potatoes again. The garlic planted just before the snow hit the South East has happily come into growth and we’ve reminded ourselves that the next task will be winter pruning – the juvenile apple tree and currant bushes but not the cherry tree which needs warmer conditions for any wounds to heal over.

Vernalisation is a process I thought I understood long before I knew the word, now I’m not so sure. Does planting garlic before Christmas in order to prepare the plants for growth the next year count as vernalisation? When I checked with the internet the emphasis seems to be on planting before a cold spell to promote flowering. 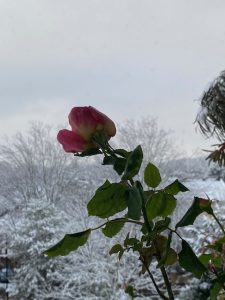 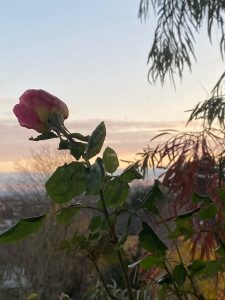 Some of the roses have carried on flowering regardless, not as prolifically as earlier in the year but very welcome when there is much less colour about. I’m not sure what the implications are for pruning but I’ve decided I will go gently and hope for the best. Even more extraordinarily some of the pelargoniums are still in flower alongside the trailing ivy which has adopted its winter pink hue.

But nothing is to me quite as extraordinary as the life and times of bumble bees. ‘A Sting in the Tale’ by Dave Goulson is highly recommended reading, and a very welcome Christmas present full of fascinating and unexpected facts. Unlike my olive trees which I’m sure would be happier in warmer Mediterranean climes, where they grew happily until the recent threat of Xylella fastidiosa, a bacterium which slowly chokes trees to death, bumble bees avoid Mediterranean countries as far as possible since their dense furry coats tend to prevent adequate cooling when their body temperature rises to dangerous levels. The unusually large Bombus polaris on the other hand lives well within the Arctic Circle and relies on being larger and unusually hairy for its survival. I’ve often wondered if bumble bees nest on the balcony – mice have done and have vacated their homes when under threat, usually I expect from me rummaging around too close to their cosy hideaways. I leave plenty of nest material around the place; straw and artificial ‘wool’ for nesting birds or bees. Apparently loft insulation material is popular with bumbles but lacking a loft I have none to provide. Or could the bees that buzz around on sunny Winter days be solitary bees rather than hungry queen bumbles? Too many questions, too few answers. And I draw the line at offering queens a home ‘chez nous’.

Lunch before Christmas with two close friends was interrupted by the characteristic buzzing of a bumble behind a heavy curtain. Each friend had kindly brought a bunch of flowers which I had put in vases and placed strategically for the visual impact at different points in the room, but had also, we subsequently assumed, attracted the bee drawn through the narrow crack in the window by the smell of the flowers. So far so good, but bizarrely the bee headed for a third vase of flowers, a permanent fixture of artificial flowers with no scent, nectar or pollen but apparently attractive enough for it to burrow into one of the silk and plastic flowers, and sufficiently comfortable that it remained quite placid as I took the flower to the open window so that the sleepy bumble could once again take it’s chances in the wider world. 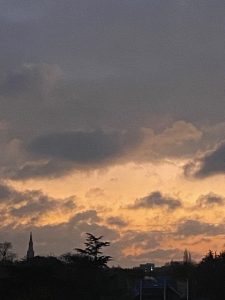 *William Arthur Ward is a new name to me but this quote caught my eye when I was looking for something else -‘The pessimist complains about the wind;the optimist expects it to change; the realist adjusts the sails.‘ Mr Ward was apparently a motivational expert who may or may not have known much about sailing. It was hard enough tying my wayward eucalyptus to the railings in a forceful headwind.