Until they think warm days will never cease,’         John Keats: To Autumn

There is always more to learn, and having thought I might begin with a brief reference to the start of Autumn I now understand that this date will depend on whether you refer to the meteorological system, based on the Gregorian calendar, which divides the year into four seasons of three full calendar months with Autumn beginning on the first of the month. But not so if you use the astronomical system which is based on the position of the autumnal equinox (equal night) or Spring equinox, when the equator is at the point when it is the part of earth closest to the sun, this year 22nd September in London apparently, although I understand there is room for disagreement about the exact date. 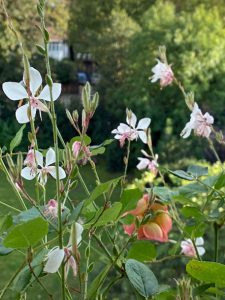 Of course the seasons, and in particular Autumn and Spring, lose their identity as you move round the globe. As I have mentioned previously my neighbour, originally from Colombia, is very familiar with our Summer weather, since it is similar to Bogotá’s year round climate, closer to the equator but at a much higher altitude and excellent for growing orchids which pop up opportunistically across the city.

I tend to think of the time when I wind down my efforts with the highly valued and indispensible but complicated watering system, and old (green plastic so not very green) watering can, as marking the end of Summer. Essential as it is to keep the vulnerable larger shrubs and trees supplied with adequate water, in truth there is a moment, sometime after the longest day, when nurturing and tending the balcony gives way to pleasure and enjoyment, without the fretting of earlier in the year. 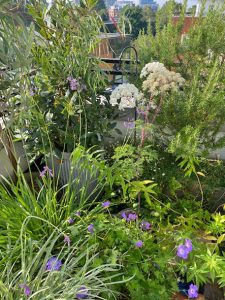 I have a memory, maybe a false memory as I have chosen not to check because I certainly had the thought, of writing lyrically, and rather presumptiously, last year of late Summer tumbling into early Autumn with roses and other flowers continuing to bloom happily in their high rise accomodation long into the colder days.

However, this year has been very different with long dry spells alternating with driving rain resulting overall in more greenery and fewer flowers as the blooms of choice prefer hotter and dryer conditions. In truth opportunities for sitting outside and enjoying the setting have been fewer and often far between with an excess of wind and rain keeping us indoors.

The abundant foliage has nevertheless looked rather good from the inside looking out and has continued to gladden my heart. A late second showing of gaura (Gaura lindheimeri ‘The Bride and ‘Flamingo Pink) still in flower and a particular favourite, with some loyal roses in bloom too, and salvias which are best enjoyed in early evening as the temperature drops and their scent rises, have lingered on much to my delight. 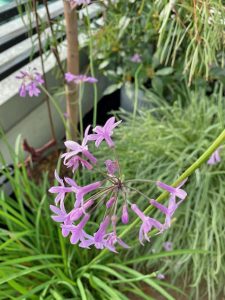 Since early Summer weekends have generally included a visit to the allotment in order to rendezvous with the now 11 year old enthusiastic gardening grandson and more often that not, my very knowledgeable sister-in-law too. It’s been quite challenging on various fronts as we have each had rather different agendas which have inevitably occasionally clashed. He has had various enthusiasms over the growing season – strawberries which were an early success, while cucumbers were a later triumph after considerable patience and much perseverance at the germination stage, when the absence of a green house and the limits of window sills were exposed. However, in stepped my better equipped sister-in-law who came to the rescue.

But the 11 year old’s first love is for ‘prize winning’ pumpkins and the possibility of producing a pumpkin heavier than any grown by our neighbouring allotmenteer. So to this end additional strips were commandeered to grow any number of pumpkins in the hope that one would be ‘the one’, additional manure was incorporated, a number of different planting sites were considered and so on until out of the blue one particularly large pumpkin emerged which after further nurturing weighed in at 25 kgs – not enough to win the contest with our neighbour but nevertheless impressive and a spur to greater things next year, subject to some negotiation with regard to how many strips can be reasonably allocated to pumpkins. 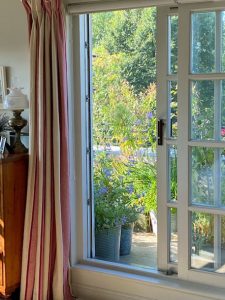 The allotment, not far from the Thames and benefiting from the proximity with good alluvial soil is unfortunately also a good growing medium for Mare’s tails too, and has claimed my attention through much of the Summer. I’ve pined for more time on the balcony and the pleasures of roof top gardening but now in mid-life the balcony can look after itself for considerable periods of time, with a happy ecosystem of plants , pollinators, shade and sunnier sites, with visiting insects too, while I’ve enjoyed playing a part in the 11 year old’s enthusiasm for, and expanding knowledge of, all things horticultural.

Meanwhile the car boot is offering temporary storage to the last of the butternut squashes, the salad drawers in the fridge are full of potatoes, onions are hanging in nets in the shed at the allotment, we have picked our first crop of apples (just two) and I have become a dab hand at raspberry coulis, such has been the profusion of raspberries on the Autumn fruiting canes, while the twittering swallows of Keats’ verse have long since gathered and left these shores. 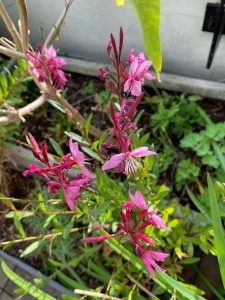 Earlier in the year bees and other pollinators often took a short cut coming through the door onto the balcony and across the bedroom to the roses and clematis (generally of less interest) outside the window. A novel advantage of the dual aspect windows and doors much loved by estate agents and in truth anyone liking light and airy spaces. Wasps, now rather sleepy, and enormous queen bumble bees have been frequent visitors enjoying a rite of passage through the doors between the main balcony and ancillary outdoor spaces and into our conventionally comfortable and appealing home, warmer particularly at night and presumably with welcoming smells from time to time – cooking, indoor plants, scented bath products, who knows. We have also had a visiting bird which presumably came in one sultry night through an open kitchen skylight and out through a narrow gap where a window had been left ajar, leaving behind evidence of it’s frightened and frantic efforts to escape. Any nuts are now put away in a cupboard. 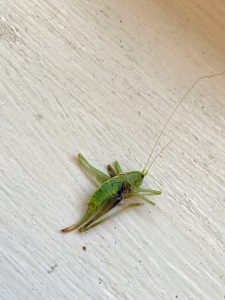 Then much more recently I found a cricket I think, up aloft and no longer alive but an astonishing presence nevertheless. It seems quite remarkable that it should have found its way, perhaps brought by the wind, to a garden space that couldn’t be more unlike the sunny Mediterranean slopes I associate with the sound of crickets on languid days evoking long ago memories and excessive heat. Our visitor might be a tree cricket I read, partial to shrubs of which I have several and nocturnal too. I wait to be informed by others much more knowledgeable than me, and in the meantime will continue to wonder at the astonishing range of plants and insects keen to visit and happy to share my elevated space and our necessarily crowded and somewhat intimate surroundings. 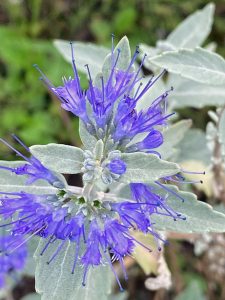 I am fortunate indeed since the roof garden offers a space to step out whenever time, wind and rain allow. The planting is best viewed from the main bedroom, or indeed bed, which is more or less at eye-level with the taller roses, gaura, salvias and the other perrenial plants carefully displayed to distract the eye from the heavy duty railings and nearby modern school-buildings, best glimpsed in snatches as the expanses of  brick and tarmac are all too dominant.

As darkness begins to fall, particularly when the wide open sky has turned red and orange, pink and violet before disappearing altogether the silhouettes of the olives and other trees against the night sky have a particular allure. I recommend standing outside for a few moments as dusk is replaced by darkness accompanied by the gradual appearance of the moon and stars – a Harvest moon maybe at this time of year and perhaps Venus in the West.

Some Reflections on Gardening Aloft 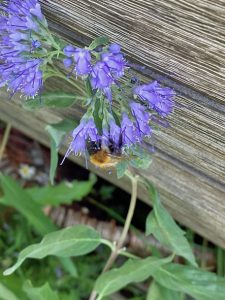 Other people often have worthwhile advice, which of course means admitting to yourself you still have much to learn which is one of the rewards of gardening but not always easy. However, I have now learnt the secret of growing Caryopteris on the balcony – prune hard in the Autumn and they will stay a reasonable size. This advice from another gardening friend was very timely as one strip at the allotment was in danger of becoming a retirement home for elderly Caryopteris. Now I have a beautiful shrub on the balcony which I will keep well pruned, and hopefully healthy and happy, both for my enjoyment and as a late season treat for the bees.

I have happily found myself returning to the pleasures of thinking ahead and wondering what bulbs to buy, noting the gardens I’d like to visit and musing on the business of gardening with all its accompanying vicissitudes. 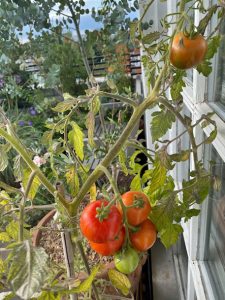 I’m not quite sure where gardening might stand in Maslow’s hierarchy of needs but certainly for me, as this stage of my life, it has clear physiological benefits and, albeit sometimes in very small ways, gives me a sense of achievement too.

That said I lost out to the 11 year old in the tomato growing competition initiated by another family member who very kindly gave us two vintage variety plants early in the year. As these were the first tomatoes I have grown on the balcony getting the silver medal feels pretty good.