From the Big Bang to the Back Garden

The familiar and virtuous cycle of gathering vegetable peelings, garden waste (withered plants, prunings or Autumn leaves) and allowing them to take their time, suitably assembled, before emerging as a brown crumbly desirable substance several months later to add to garden loam or potting mixtures, is one thing.

And even this is not without its challenges, as plastic seems to infiltrate even the greenest of spaces – part of a pink plastic comb arrived on the allotment last week, buried in the manure we were trying to incorporate, and sadly I assume that micro-plastics too have infiltrated our growing spaces.

But grasping the enormity of the big bang in the creation of our universe, approximately 13.8 billion years ago, and the consequential recycling of the atoms we are all made up of is quite another – a life cycle on an altogether different scale and far beyond my understanding, although the first pictures from the Hubble telescope – incomprehensible, vivid and extraordinarily beautiful – remain unforgettable.

Incontrovertible though it may be, it has taken time for me to grasp the idea that the atoms that make up our bodies, and everything around, once made up a star which, at the end of its life a mere five billion years ago, exploded to release the building blocks of Earth and the other planets in our solar system. From the material world and the plants around us, to the unreachable stars in the night sky, all recycled across millenia.

We now know that this is so, and that this truth has also been instilled in many of us in ancient graveside rituals and the familiar mantras of church services – ‘ashes to ashes , dust to dust’, ‘for dust you are and to dust you will return’. 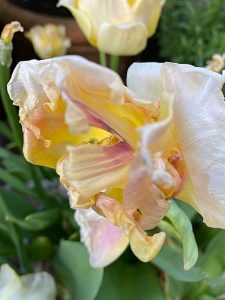 Our own small world has been ever more pre-occupying over recent weeks as the balcony has moved from Spring to Summer, with the assistance of more bags of compost than you might imagine a small roof garden could make use of, as well as several trips to the local garden centres struggling to ensure that supplies keep up with demand.

However, an absence of  butternut squash seedlings, much needed as my carefully reared plants were hit by a particularly viscious cold wind that the temporary bubble wrap cold frame was unequal to, will leave a void. A rearrangement of the larger containers also became a priority in an attempt to provide an adequate wind break and fill the gaps left by the dying horse chestnuts opposite. By late Summer last year these had become too dangerous to leave in situ, but once felled, the plants and those of us familiar with the pleasures of our garden in the sky were left fully exposed to the westerly winds. 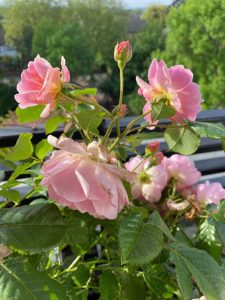 The allotment too has demanded attention in the interval between the arrival of welcome warmer weather and before the Mare’s tails completely take over, at which point the larger plants such as courgettes and raspberries fend for themselves and in turn swamp the Mare’s tails. The effort to keep on top of the forest of Mare’s tails continues until early August, when calm is restored as they begin to retreat.

Wild life of a different sort is threatening two newly planted trees below – a flowering cherry and a tulip tree are at risk as foxes have taken to nightly visits, digging near the young trunks and exposing the roots. Meanwhile above, on the East facing passage, aphids are in charge, and reaching the water supply now involves a particularly complicated manoeuvre. This includes ducking under a standard rose (Boscobel, as it happens, with beautiful coral-pink flowers), itself beleaguered with greenfly, to reach the tap by which time my hair has usually got entangled in the aphids’ sticky residue, which is only partially compensated for by the beautifully scented blooms close at hand.

At the allotment the cherry leaf curl is the outward and visible sign of a preponderance of blackfly, but there the associated sticky residue has become a magnet for bumble bees, apparently happily enjoying the sweet supply.

Why Do the Bumble Bees Cross the Bedroom? 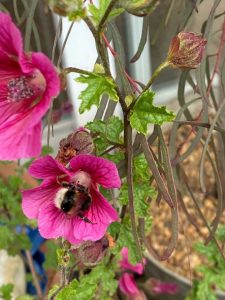 However, a brief mention of these bedroom invaders was trumped yesterday after a leisurely lunch with close friends, each recounting more telling examples of the  clash between urban life-styles and local wild-life. Tales of foxes, squirrels and pigeons being in turn trumped by an account of well-adapted badgers ‘widespread in London’s outer suburbs’ where they grow to be ‘slightly larger than their country cousins’. 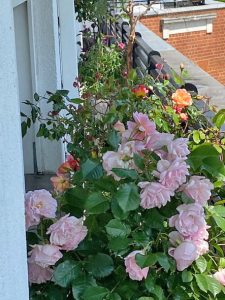 All this has come as a bit of a surprise – my only encounter with a badger being in a country lane in Cornwall.

A garden in the sky has much in its favour, and I will now add an absence of unwelcome trespassers, and a safe distance from marauding badgers, to the list of assets. But planting in an area confined to a largely brick and concrete setting does mean missing out on the happy association between areas of wilderness and cultivation, although it is still well worth the effort. Plants that like to spread struggle in pots, but on the whole it is well worth trying to grow anything you like in good quality compost with enough water and plant food to compensate for the cramped conditions. Mediterranean shrubs and small trees are happy enough if they are near  a warm wall, but English native shrubs and small trees want to be released into the wild after a short stay in the Metropolis.

Nevertheless the painful reality is that it is a very small space.

And the expression on visiting friends’ faces from time to time betrays their shock and surprise at being confronted by such densely planted containers, now reaching peak performance on the balcony, which is in part my attempt to soften the exposed site.

I have mentioned before that succumbing less to temptation and employing a little more restraint might be a good way forward.

Meanwhile I have just had a delivery of Dropmore purple (Lythrum virgatum) – five plants to be exact. It is a new plant to me and is, I read, named after Dropmore House, home to Lord Grenville, who as Prime Minister pushed through the law abolishing the slave trade. In itself a good reason for selecting this plant, but its intense purple-red flower spikes, and attraction to bees drawn to the supply of nectar well into late Summer, is another good reason. 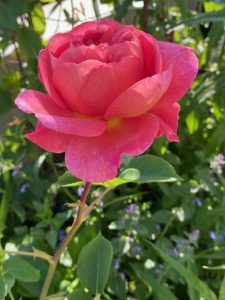 Although the converted Edwardian School, built in the vanguard of the 1902 Education Act, and on which the roof garden and I perch, is now reconfigured into various flats, we occupy a space once part of the original top floor and roof space which would have dominated the area around. For a while the biology labs were placed aloft, but by the time of the redevelopment in the late 1990s the brief was for a less ambitious affair and an industrial roof (the sort that has been used for years to top factories and now with a rather beautiful patina) has been used instead of roof tiles. 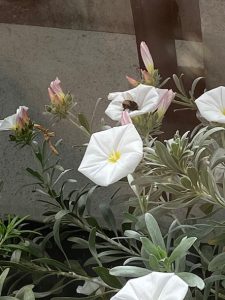 Tastes and times differ but I rather like the mixture of history and the undoubted industrial quality of the roof. Who knows what will occupy the roof garden in future years; built as a school it was used as the headquarters of the ‘National Relief Fund’ during the First World War and the headquarters of the Home Guard in 1940 before later being hit by incendiary bombs, which burnt out the whole of the top floor. 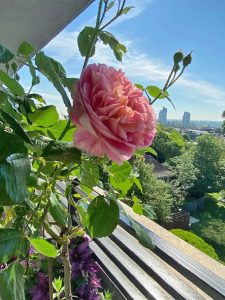 In the early years the school apparently had very beautiful ‘Italianate’ gardens with pergolas and lily ponds. Gardening lessons were a prominent feature of the curriculum.

I’m not sure that my over crowded containers would meet with approval, but the early summer roses have been beautiful, plentiful and have assured the arrival of bumbles bees and other pollinators in ever larger numbers. A few weeks on and the flowers are fading fast and beginning to shrink at the edges but there is plenty more to come. 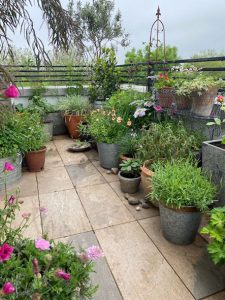 My particular favourites are the tall floaty flower stems such as gaura and verbena bonariensis, held together by lemon verbena which I grow for its craggy shape and assistance as a plant support.

The tulbughias of all sizes thrive in pots, veronica longifolia is suitable for large gardens but is coming into flower, although in its cramped conditions will struggle to keep going, and if you are an optimist by nature you might try keeping scabious in pots from year to year, although the number and quality of the flowers may deteriorate. 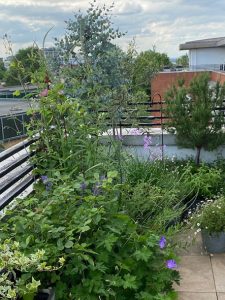 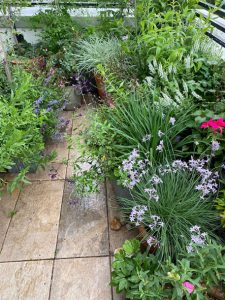 Meanwhile I have increased the number of thalictrum plants around the edge of the balcony. They are at the half-way stage at the moment. The leaves are looking healthy and like the lemon verbena doing a great job of supporting other plants. The flower spikes are already about three or four feet high and as one reached eight feet last year I am hoping for another dramatic, delicate display. Underneath, the lavenders are struggling to get their fair share of sunlight and the bees are heading for the nepeta, somewhat hidden amongst the greenery.