Tuesday 1st December The current lockdown has two more days to run and then (subject to tonight’s vote in the House of Commons) we are anticipating that hereabouts Tier 2 rules will apply.

But that is for the future, and for now, confined as we all are to various degrees, the wintry sun is bright, above the horizon a hazy light blue sky stretches high and wide and through the tall, skeletal trees there are pockets of Autumnal colour clinging on. In this moment I’m reminded of my fortunate circumstances.

Think of any street in a suburban or urban area, or a road in a country town or outlying village and turn it through ninety degrees, stand it on its head and there you have it – a converted Edwardian school with the old school honours boards on every floor, close to forty households and surrounded by a garden bordered by trees twice as old as time and protected by period gates liable to struggle with the complexities of entry codes. From my eerie at the top of the building I can see for miles as the leaves on the trees nearby have dropped and the skyline is once again dominated by a majestic cedar.

A little while ago someone I’ve known all my life, told me she thinks balcony gardens are boring. Maybe this isn’t their moment, the absence of a history and a future, other than in the imagination, their transience, coming as it does with the awareness that it will only take a few hours and all is gone. It is of course possible to recover quickly from damaging winds, horticultural mistakes, neglect and overc 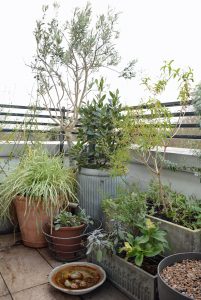 rowding and to conjure up wonderful displays, recover from failed experiments and have a year round display all within arms reach, and with beneficial insects and pollinators in mind. But I think I know what she might mean. There are times when planting for the future, or feeling a connection with the past, has added value and significance.

Balconies, roof gardens and other opportunistic spaces have nevertheless come into their own this year and have been a place of solace and a source of edible crops for unexpected first-time gardeners and others whose circumstances have changed during the course of the year.

While picking up a picture from a gallery I know, I recently, and rather unexpectedly, heard about an extremely successful crop of tomatoes that had grown happily through the Summer on a terrace in West London. I’ve never grown tomatoes as the combination of watering requirements at key points in the holiday calendar, the absence of  a greenhouse and the inevitable expectation that the end of season fruits are turned into chutney (my mother’s preserving pan has been a valued decorative piece for years) has never tempted me, but it’s a thought.

Meanwhile I’ve had it both ways – the immediacy of the planting outside my bedroom door, closed firmly now as mice have been venturing indoors, with the possibility of transplanting anything that has grown too big to the gardens below, or more often to the flower strip at the allotment, for a more permanent future.

Caryopteris (bluebeard) are a case in point. These faintly scented late-flowering plants with golden, silvery or indeed mid-green leaves also come in a wide range of flower colour – pink, white or more commonly and spectacularly deep blue (including the aptly named cultivar ‘Heavenly Blue’. They are happy enough in containers for one or two seasons, are beloved by pollinators, particularly bees, and are so life enhancing that the wrench at the end of the season, when another year’s growth would crowd out much else, is worth the pain of separation as Autumn approaches. They come highly recommended if you want to extend the season and have masses of colour, as well as offering a feast for foraging insects later in the year, and they do transplant happily.

Saturday December 19th As allotments have remained permitted public spaces, although in other respects under the recently introduced Tier 3 rules restrictions have tightened, we have been rendezvouing most weekends with one permitted other (the 10 year old gardening grandson) and caught up too with neighbouring allotment holders, all socially distanced.

But inevitably this has to come to an end – the allotment is ready for Winter, the green manure is sprouting well while other areas have been weeded, dug over and covered for now, although another year more cabbages could fill the void. Optimistically a few herbs, including rosemary and thyme, have been carefully planted and labelled by the ten year old, the garlic has been checked over, and the broad beans are growing.

We’ve arrived from different directions under leaden skies, feeling somewhat subdued and distracted by the news that we are likely to hear an announcement at any moment that we will soon be in Tier 4 and inevitably changing plans for the festive season. The sombre mood is catching but begins to lift as plans for strawberry planting are instigated by the quieter than usual 10 year old who’s thinking ahead. The glimpse into the future is catching. 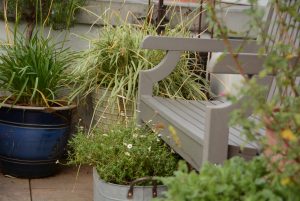 Competition for space at the allotment is growing and as with the balcony, selecting and censoring the planting list comes with painful choices. However, containers are well suited for any number of herbs, which can be squeezed in amongst other pots and plants. But parsley never works for me in a pot, as it doesn’t like drying out, and although growing mint in containers is recommended to avoid the problem of annexation of the surrounding growing space, it also needs to be kept well watered if the pot is standing on a hard surface rather than plunged into the ground.

Wednesday December 23rd 15:24 I’m distracted and struggling to write anything very coherent – my phone is close by and I’m reminded every couple of minutes by News Editors picks that a ‘Brexit trade deal is imminent , says EU diplomat’. A second message says a new Covid variant from South Africa has been found in the UK, with all that that entails, and millions more people will enter Tier 4 on Boxing Day. It’s difficult to hold strong and conflicting feelings (hope for the first, dread of the second) alongside the turbulent emotions engendered by  memories of Christmasses past and anticipation of this very particular and different year, as well as familiar everyday anxieties about being ‘ready’ for Christmas – which this year means a virtual Christmas relying on Zoom, WhatsApp and the phone. I’m too old to communicate via Facebook and Twitter but not so old that I don’t happily opt to Zoom to fill some of the gaps in my diary.

Oscillating between reflections on my immediate surroundings and the wider picture has an inevitably surreal quality. The contrast is stark. Certainly from the warmth and security of my comfortable vantage point, the roof garden continues to look quite lush.   All 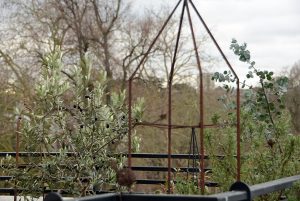 the silvery leaved evergreens are in good heart, with the olives leading the way, holding onto some fruit and with new growth emerging. A late-planted dwarf Eucalyptus Gunii (who knew there was such a thing) has yet to reassure me that it wasn’t an unwise purchase as the hoped for new growth hasn’t in this instance emerged and it looks rather alien amongst its Mediterranean and ‘cottage garden style’ neighbours. I may need to steel myself for a radical rethink but I don’t think that it will be a welcome addition to the shrubberies below, still less at the allotment. I will wait and see. 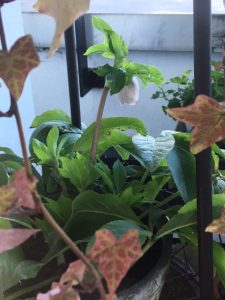 Inside I have some fruiting ‘gum’ stems, bought from the local flower stall and bringing indoors the welcome and evocative smell of eucalyptus oil. However, earlier this morning I noticed that for the first time in many years there are no roses in bloom for Christmas – rosemary yes, hellebores yes but yet to reach their prime, the wild mallow that arrived with the heat of the Summer yes, and brightly coloured pelargoniums as well as the ‘Cornish Daisy’, Erigeron karvinskianus.

December 24th 8:30 The sun is up, blue skies have returned and a bumble bee is enjoying the available mallow.

News Editors picks confirms that an EU deal has been agreed and adds later that Storm Bella is forecast to hit many parts of the UK which will be battered by heavy winds over the next few days. 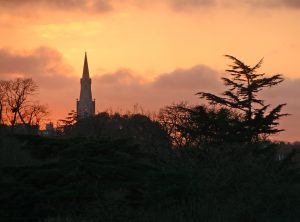 ‘I prefer winter and fall, when you feel the bone structure of the landscape.

S0mething waits beneath it; the whole story doesn’t show.’