Perhaps I can learn some elementary Italian while teaching my Sardinian neighbours some basic horticultural principles – watering, feeding, right plant right place. The lessons have begun with my neighbours being introduced to ‘Spring bulbs’ the stalwart of Autumn planning and planting although I have yet to learn the Italian word for bulbs. 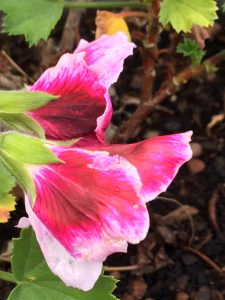 was mid-September, and high Summer had returned briefly to the roof garden when we had the first (informal) Level 1 introductory gardening tutorial. It came as a surprise to my tutees that on-going care was often required to ensure a spectacular display in due course, that finding plants to provide bright winter colour throughout an English Winter would be a challenge on a small balcony and that there were outgoings such as plant food and compost that would need to be funded and sourced.

I later suggested adding some particularly cheerful red wallflowers to the shopping list.

At the same time, millions of acres of land were being destroyed by raging fires on the West Coast of America with mounting loss of life and livelihoods as vineyards shrivelled, smoke plumes rose and homes were lost. In Britain, after damaging floods earlier in the year the South West corner of England was battered by Atlantic storms during August, which exceptionally reached a sufficient magnitude to be named before moving north to Wales with devastating effect. 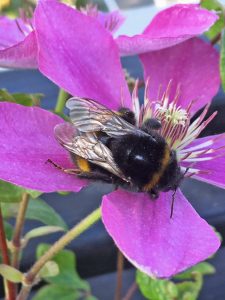 All hard to comprehend as the bees were still buzzing and the roses still blooming, flattered by the soft early morning sunlight and touched by a very gentle breeze. Hereabouts the idyll is interrupted not unusually by a noisy flock of parakeets unwilling to come too close to the building but making their presence felt perching on the dead horse chestnut opposite, while others prefer to squawk from further off. Sadly man’s hand has played a part in the tree’s demise, since after decades growing to full height, then lopped to ensure its twilight years, careless tarmacing by the property next door has brought this elderly, probably disease-ridden but majestic tree to its knees. 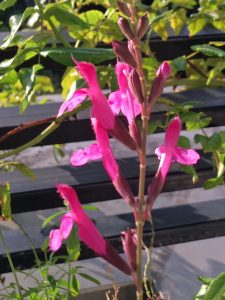 It’s now mid-October and the horse-chestnut has gone, wider vistas have opened up and before I had a chance to establish an effective barricade of silver evergreens and other shrubs, the full force of Storm Alex hit. This is not without consequence as a vulnerable area, in an awkward spot (and last repaired in 2017 more or less coinciding with my first post on 3rd August that year) has resulted in water leaking into the flat below and once again we are left helpless in the face of Nature’s onslaught until drier weather and further repairs are completed.

I’ve never made it to the East Coast of America in the Fall to coincide with the trees showing their wares, displaying spectacular vivid crimson and flame coloured leaves in Vermont, New Hampshire and elsewhere. If you time it right I believe you can follow the earliest changes in colour first in the colder north before travelling south as the seasonal display unfolds. All of which is tempting but may not reach the top of my ‘must see’ list as and when plans of this sort can be easily entertained again. 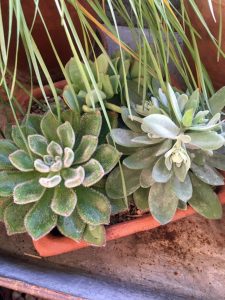 More immediately there are any number of spectacular displays closer to home, with gardens and hedgerows full of berries and leaves in Autumnal colours, which as they fall reveal half-hidden gems, like the magnificent cedar rising above the surrounding deciduous trees nearby no longer hidden by the craggy horse chestnut.

The combination of listening to the radio while preparing food often works well, and thus it was I happened upon the tail end of an interesting and comprehensive expositon of the processes by which leaves turn from green to yellow and red as the days shorten, and morning mists return. Key fluctuations in the weather, as well as the quality of the soil, play their part in this complex Autumnal rite with the emergence too of anthocyanin to add red colouration, and made afresh alongside the redistribution of nutrients associated with the  breakdown of chlorophyll.

My attempts to introduce some Autumn colour, berries preferred, onto the roof garden have never met with much success. The nearest I managed was a rather neglected blueberry which did it’s best but as it wasn’t one of a pair didn’t fare well. Cotoneasters have been recommended and there are smaller varieties such as Cotoneaster naoujanensis ‘Buried Treasure’, which I have planted in the large containers which front the main entrance to the building, but its arching branches may take up too much space aloft, although I’m tempted to try and wonder why I haven’t done so before.

Hits and Near Misses 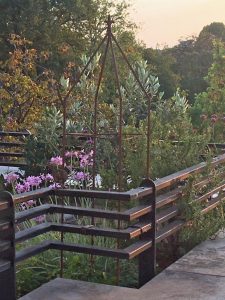 If you want to find make use of a roof-top space these would be my top tips, none of which are original, but which certainly hold true if you enjoy gardening, want to make use of an outdoor space however small and have a sunny situation. The same is probably true of a shady spot but plants choices would have to be rather different.

But on the other hand who knew that self-seeded mallows will attract the bees well into Autumn, clematii and roses of all sorts are wonderfully happy aloft and if you are lucky enough to have a back-drop of tall trees and far reaching views you are well compensated for all the planting plans and garden projects that can never make it onto the drawing board, while of course missing the rustle of leaves underfoot and pining for space for a few more plants.

Nota bene – according to the Chambers dictionary –‘il bulbo’ is the Italian for bulb, or perhaps more correctly, ‘bulb’, the English word for any subterranean bud with swollen bases in which reserve materials are stored, is derived from L – bulbus or Gk – bolbos (onion). Meanwhile I have yet to have my first Italian lesson.

Season of mists and mellow fruitfulness,
Close bosom-friend of the maturing sun;
Conspiring with him how to load and bless
With fruit the vines that round the thatch-eves run;
To bend with apples the moss’d cottage-trees,
And fill all fruit with ripeness to the core;
To swell the gourd, and plump the hazel shells
With a sweet kernel; to set budding more,
And still more, later flowers for the bees,
Until they think warm days will never cease,
For summer has o’er-brimm’d their clammy cells.

Who hath not seen thee oft amid thy store?
Sometimes whoever seeks abroad may find
Thee sitting careless on a granary floor,
Thy hair soft-lifted by the winnowing wind;
Or on a half-reap’d furrow sound asleep,
Drowsed with the fume of poppies, while thy hook
Spares the next swath and all its twined flowers:
And sometimes like a gleaner thou dost keep
Steady thy laden head across a brook;
Or by a cider-press, with patient look,
Thou watchest the last oozings, hours by hours.

Where are the songs of Spring? Ay, where are they?
Think not of them, thou hast thy music too,–
While barred clouds bloom the soft-dying day,
And touch the stubble-plains with rosy hue;
Then in a wailful choir the small gnats mourn
Among the river sallows, borne aloft
Or sinking as the light wind lives or dies;
And full-grown lambs loud bleat from hilly bourn;
Hedge-crickets sing; and now with treble soft
The redbreast whistles from a garden-croft,
And gathering swallows twitter in the skies.