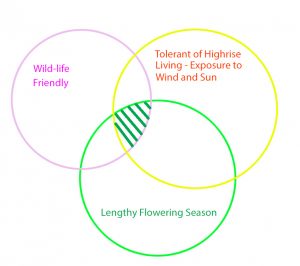 My planting principles in ‘Eulerian’ form.

I can’t remember when Venn diagrams first came into my life but in my mind they are closely associated with flip charts, felt tip marker pens and a degree of anxiety – attending conferences on topics I knew I should have been more committed to, in break out rooms with people I had never met (with the requirement that I should be able to strike up immediate and creative working relations) and in buildings that always underestimated the number of women needing to use the loos.

We are indebted to John Venn, who in 1880, in a paper entitled ‘On the Diagrammatic and Mechanical Representation of Propositions and Reasonings’ introduced ‘Venn’ diagrams, which he referred to as ‘Eulerian Circles’ based on earlier work in this field. As with many other subjects my understanding of the underlying principles is limited to the superficial and fleeting, and indeed the Wikipedia entry says the introduction of their article is ‘too technical for most’, so I am not alone, but the visual representation of three overlapping circles, which have migrated over the centuries from the domain of philosophy to much wider usage, and the focus on the area where all the three circles do overlap, is actually, and perhaps surprisingly, one I frequently have in my mind’s eye. Reasoned choices I suppose always involve assembling information, but I just happen to like the notion of this diagrammatic aid that I was first became conscious of in a bygone age.

I have also been musing on the much loved shrubs and other plants that have been and gone during my tenure aloft. These include a beautiful Japanese cherry tree which became water-logged after a sustained rainy period, and never recovered, a particularly bee friendly bluebeard (Caryopteris) which inevitably grew too big and spent too much of the year looking twiggy (but I might re-introduce as a late Summer treat for both me and the bees) and a blueberry which struggled.  Thinking back has reminded me to ask those of all ages in charge of the family allotment to plant a pair of blueberries to assist pollination, in pots of ericaceous compost, for the delight of birds and others and I will enjoy the early blossum, Summer fruit and Autumn leaf colour as I wander by.

Caryopteris ‘Sterling Silver’ Truly a magnet for bees, but too big.

So back to gardening, and sustainable planting options, as I begin to plan ahead. This has to be a project confined for the moment to the main terrace, as the narrower walkways, that need more structural work to ensure no further leaks to the property below, are still out of bounds pending further work. But no matter, I am reconciled to the delay, have more or less got over my disappointment that coming home, or welcoming visitors, relies on houseplants for greenery until reaching the terrace, and I have negotiated the acquisition of a new bench which will take up less room than the original garden chairs since space is still a key consideration in this exposed roof terrace.

Edible Blueberry which on lts own was only briefly rewarding. It needed a partner.

Having done an audit in a brief moment recently, when the wild weather gave way to chilly still air and the balcony was basking under the Winter sun, I had confirmation that several plants had taken advantage of the wet, warm Winter and gone for growth. So running with this theme I am anticipating fewer containers this year, (in my hay day I had well over seventy) with larger plants giving a greater sense of scale and more effective wind protection as well as seasonal interest, while reducing the trip hazard that multiple smaller pots offer. And I can see that with thought and attention to detail I can build on what I’ve got and create a rather lovely display, both to look out at and sit amongst, that will satisfy the three essential conditions of being wildlife friendly all year, able to tolerate the winds and weather year on year and form a tapestry of colours and textures that can be tweaked and developed but retain charm and interest, including more scent, as well as food and shelter for visiting birds and bees.

This rather grandiose plan will involve a certain amount of self-denial – a beautiful hydrangea such as hydrangea aspera Villosa, with eye-catching saucer shaped purple flowers, that would need vastly more space than I can provide, and has a short flowering season but looks very tempting, won’t make the list. On 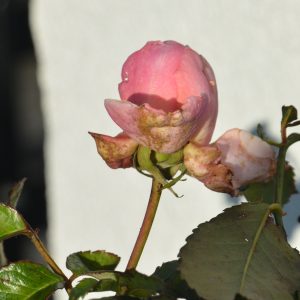 the other hand relinquishing my Abelia ‘Edouard Goucher’  because it doesn’t meet the selection criteria, and I have never grown fond of , will come as something on a relief. On completely unreasonable grounds I have never warmed to this long flowering, tolerant shrub, although on the balcony as elsewhere in the southern reaches of the District Line, it grows like topsy, providing flowers for months on end. Instead I’m hoping that by buying one or two additional small eucalyptus trees which can huddle together in moveable containers (more pot movers being on the shopping list) they will be an effective wind break and like my Eucalpytus Nicholii exude fragrant oil as you brush past on hot, sunny days.

I wonder too if reducing the overall number of pots and plants will offer enough opportunity to garden, to fiddle about with, to nurture inbetween waiting for the potatoes to boil and supper to be ready? I’m not sure, and there’s a nagging anxiety that the overall endeavour will veer too far in the direction of good taste. 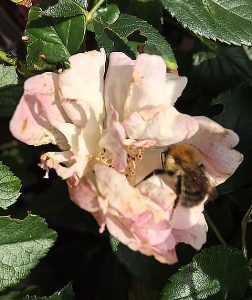 Meanwhile I’m feeling the effects of no ‘hands-on’ gardening over recent months as the works to prevent water penetration are now imminent but not yet completed, and the Winter aloft has been particularly windy and wet, neither of which I enjoy unless in the midst of a horticultural project which demands complete attention – lugging pots and compost around comes to mind. Surprisingly the absence of any opportunity to do any gardening has temporarily diminished, rather than increased my interest in gardens and gardening, which presumably is an attempt on my part to avoid stirring up too much by way of frustration and envy with no immediate consoling outlet.

And today, Tuesday 21st January, on another beautiful wintry morning, the birds are darting about, a bumble bee has just headed for the flowers on the rosemary bush, the sun is shining and there is much in prospect that does feel worth waiting for in this Metropolitan high-rise hide-away, offering rewards of different sorts and respite from the wider world. In the meantime we are heading for nearby Richmond Park with some quickly assembled sandwiches.

I have long been a fan of Anna Pavord, a columnist through the print years of ‘The Independent’, whose prose weaved the personal joys and frustrations of planning and growing, with horticultural knowledge and gardening wisdom. And now twenty years after it was first published, her acclaimed book ‘The Tulip’ has been re-issued and has arrived in time for my birthday. Part I is full of interesting sections on the author’s travels in search of the bulb itself, it’s place, particularly in Western European culture and history, as well as fascinating accounts of the early growers and cultivators of these sought after bulbs. All accompanied by illustrations unsurprisingly mostly of tulips but including cartoons, pamphlets, fabrics of different sorts and 17th Century still life paintings. Part II is a listing of tulip species. All this amounts to a heavy tome rather than light reading – and I commend it.

Many years ago I lived just off the Fulham Road and from time to time would wander into an independent book shop not far away, run by an enthusiastic book-seller of changeable mood who fluctuated between an over the top enthusiasm for anything that crossed her path and a withdrawn morose quality that could permeate the shop – not always easy for potential customers. Into this milieu one day came Anna Pavord, who I immediately recognised and consequentially got caught up in my own excitement at the proximity. However, I was particularly dismayed when the shop-owner, characteristically absorbed in her own world, failed to recognise Anna Pavord who had to introduce herself, and was quietly explaining that she had come by arrangement to sign some copies of her book (as distinct from coming for a ‘book signing’) as I withdrew and left, reflecting on my various discomforts.

Thanks for the Memories 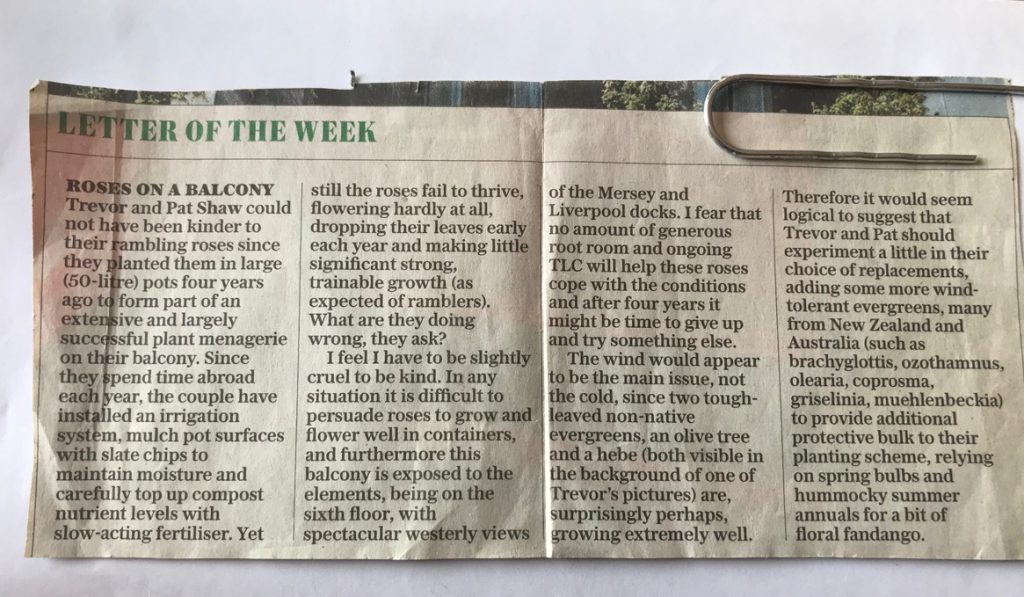 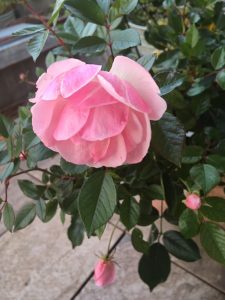 than a musical note but shorter by far than many man-made structures, the most enduring plants and flowers (other than the olives and for the record one beautifully scented rose which seemingly goes on for ever) apparently enjoy roof-top living on my south facing balcony. Whilst never particularly long livers as they battle against the elements and my erratic feeding and watering, they do last, moderately happily, and flowering well, for a number of years. 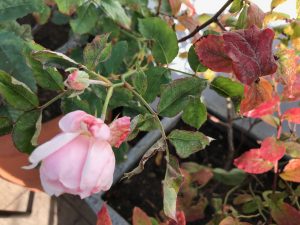 l flowers are on record and the roses particularly, including a rambler which of course flowers briefly but gives the birds very welcome cover, actually seem to do well in spite of the additional challenge of some black spot and the damage done earlier in the year by the inevitable green fly.

I always enjoy comments and advice and mostly follow it, learning as I go, although the results are not always the hoped for outcome – my fruiting cherry outgrew the balcony and is now thriving on the allotment with more space and plenty of trees nearby for cross-pollination. And I regret not having thanked the West Country reader who forwarded this cutting from a week-end gardening section. It was interesting to read but surprising too, as roses seem to be one of my most bankable plants – including ramblers, china roses, shrub roses and others I can’t identify. Once upon a time I spent my university years in the North of England and a fellow southerner calculated that one way or another you lost a month of daylight by travelling two hundred or so miles North. The calculation may be wrong but it seemed all too true to my southern sensibility. Perhaps I’ve been lucky with my roses but certainly they thrive with their faces in the sun. This is actually a problem as the blooms along the southern edge of the balcony all turn to face the sun and are then, frustratingly, best seen from the car park way below. Whether the sunny, south facing aspect is cause or effect, or a chance association, I can’t be sure but it might be worth trying again.

Since roses are part of my theme I’ve included photos of some of my roses from times past in the hope of encouraging all high rise container growers to try growing roses, although perhaps ramblers are rather ambitious and in truth after the very dry summer of 2018 I was on the point of abandoning mine – but the cooler, wetter weather of 2019 has saved it. The tits and robins appreciate the protection it offers and it’s extremely effective at keeping the magpies away from the feeders.