Hovering somewhere between detailed plans and overall scheme is the question of style – a word that has become ever more closely associated in the gardening press with words like contemporary and project – cottage garden style, formal style, Mediterranean style, or on my micro scale, a mixture of all three. Other words like ‘naturalistic planting’ and ‘wild life friendly’, both of which I favour, have also found their way into the language of everyday gardening.

Before the relentless Autumn rain made any planting an unlikely ambition, a conversation en route to the local garden centre with a nine year old aspiring dog owner, turned to the favoured breed of dog (golden retriever as it happens) to be followed by a very definite statement that he doesn’t like ‘mixed dogs’ because ‘you don’t know what sort of character they will have’. I’m not sure you can ever be sure but I think I know where he’s coming from. A definite style of garden like a definite breed gives you some reference points and a mixture risks becoming a mish-mash.

The shopping trip itself led to an impressive conversation about relative value. Was the rather spindly Trachelospermum Jasminoides (a London favourite) at half the size, better value than the much taller plants arrayed alongside the entrance gates at three times the price? 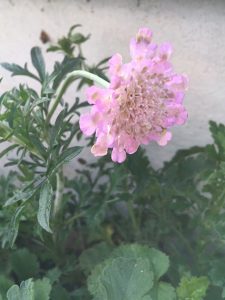 suitable diet and in a desirable location it would plump out, and it has. In fact there has been rather a lot of healthy growth and plumping out, almost to excess, of plants and trees on the terrace during this period leading up to these darkest days of Winter, when access has also been hampered by essential work to repair a leak into the flat below from a narrow walk-way leading to the main terrace. At the height of the emergency, portable pots and plants were rapidly relocated to friends and family and everything else that might impede the essential work was piled onto the main balcony and then once again neglected, but with rain continuing to fall there was an Autumnal growth spurt and even now plants confused 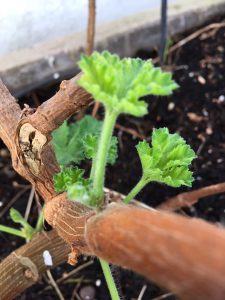 by the intermittently milder weather, and frequent downpours, seem unsure about the moment to make their entrance or leave the stage.

I spotted an unseasonal scabious putting on a bit of a show earlier today (Sunday December 22nd 2019, the day of the Winter solstice) as well as one or two roses lingering on and most surprising of all a pelargonium sending out shoots somewhat ambitiously.

Having relinquished all thoughts of plant placement during the crisis, rather like a scattering of bulbs  randomly thrown into an orchard to look more natural, which presumably in this context means distributed as nature intended, the various remaining large containers landed haphazardly.  Of course the bulbs themselves in any natural planting scheme may or may not be the host of smaller native daffodils of Wordsworth and the wild.

Still no space for the chairs first piled up against a wall, and now lodging with my ever tolerant sister-in-law, but otherwise liberated from too much planning, the terrace has emerged, as it happens, with a surprising charm. Meanwhile we have all entered calmer waters as the leak has been temporarily dealt with, water is no longer pouring in, the ‘at risk’ ceiling seems to be made of stern stuff and hasn’t collapsed to add to the disruption and discomfort below, the birds are back and there is time to consider what next. 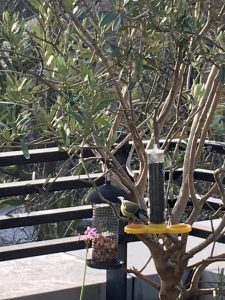 will include a return visit by the surveyors and workmen to complete the further definitive work to prevent another leak, now being blamed largely on poor design and an aging membrane, a replacement work bench on the balcony as several years of outdoor living have taken their toll and over time the effort required to prop it up has outstripped its contribution to outdoor life aloft, and hopefully creating a space for the chairs in the eventual scheme of things.

This is not to underestimate the losses – unplanted fritillary seeds sent by a cousin and hopefully still viable next year, no opportunity for Spring bulbs in the remaining upturned containers and much missed moments immersing myself in this city-edge roof garden, now with views for miles around, as the surrounding lime trees, due to be crown pruned before too long, have long since surrendered the last of their leaves. Nothing of course on the scale of the loss and devastation in parts of Yorkshire, or further afield in Venice, and now in neighbouring Surrey too as flood water reaps havoc on homes and habitats.

Throughout the second half of the year the white thrift (Armeria maritima) has gone on and on flowering. It arrived in a ubiquitous back plastic container at a moment when the plant stand opposite the main bedroom, and exposed to all the elem 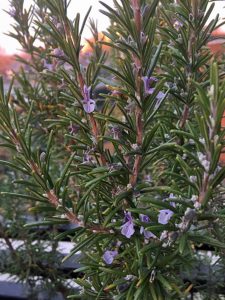 ents, was looking particularly sorrowful. So having found a terracotta pot, I put the plastic pot inside it’s more decorative counter-part with the intention of planting it properly but never did, and now never will, as it has rewarded my forgetfulness by giving an extended display, unlike the pots of pink thrift which I like rather more, but have been less impressive this year, and perhaps would prefer rather different planting conditions.

Who would have thought that this was the way to enjoy a plant native to British coastal areas but happily transplanted to this urban cliff edge also favoured by  Mediterranean and other plants, including herbs such as bay and rosemary, as well as cistus and sweet box (Sarcococca), all of which have been recommended to me and have adapted surprisingly happily to container life at altitude.

I’m no numismatist, and have only just learnt to spell the word, as the collecting of coins has never been my interest. But for those who are, the British thruppenny bit  had a design of thrift on the reverse for nearly twenty years until the early nineteen fifties and then remained in circulation up until decimalisation, ceasing to be legal tender in August 19 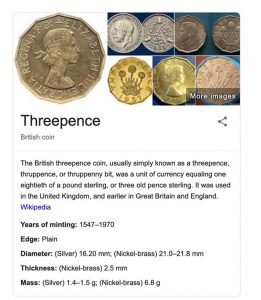 71. I remember it well, and also as I grew older my childish annoyance that the aptly chosen, copper tolerant plant was reproduced with  disproportionately large flowers, unlike anything found in nature. I might also have been annoyed at the allusion to frugal living, not my natural inclination, but something of a post-war necessity in a waste-not want-not age and now a necessity to counter the impact of climate change, and the ravages of a throwaway society.

Many moons ago, I went on a poetry writing course in Provence that unexpectedly spanned the period between the death of Princess Diana and the outpouring of public grief, alongside the private agony, up to the funeral, memorable in particular ways. Whilst away from events in London, on the sun-soaked terrace and in the cooler interiors of the elegant ‘fin de siecle’ building we were using, I learned the eternal truth, namely that in writing a poem, or indeed in crafting any piece of writing, it is only through the act itself that you really find where the writing is taking you, and come to discover what there is to understand along the way. This came as an unexpected observation at the time, but so it is and as with writing so with gardening. 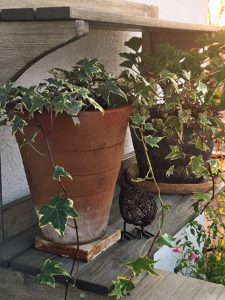 A serendipitous self-seeded plant, or a new bench, can shape and change things in very unexpected ways and I’m now converted to the possibility of an uncluttered future with larger containers and bigger plants replacing the many smaller pots that have long been a firm favourite. Of course I may break my resolve as the temptation to plant more, do more, grow more, experiment more is likely to be hard to resist.

However, at the moment the possibility of more space between things holds an allure.

Meanwhile the roses which should have been pruned by now are continuing to produce buds, although some are struggling with black spot on leaves which I sh 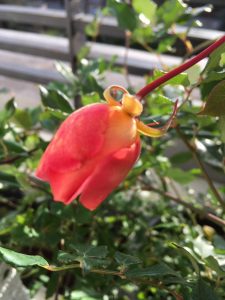 ould have carefully removed several weeks ago but didn’t.

The combination of stunted buds, washed out colour and disfigured leaves, with scent a distant memory, falls short, I suppose, of high summer and abundant blooms. But there is a magic in these determined efforts to ensure that there are flowers of some sort throughout the year even if they need a bit of seeking out in sheltered spots which might catch some Winter warmth, and will undoubtedly soon disappear again. But for now each flower or bud can be enjoyed and cherished, in a way that is very different from the lights and glitter not far away, or the massed banks of flowers that accumulated feet deep in Kensington Gardens over twenty years ago.