As an undergraduate, a lecturer once drew a red line right across an essay I’d written on a long forgotten subject, but possibly embryology as that was the lecturer’s field. At the bottom he wrote by way of explanation that he refused to tax both his eyes and his patience by trying to read my writing (this being in a pre-laptop era by some margin) so the essay had to be re-written without the exaggerated swirls and other embellishments that were, and more or less still are, a feature of my hand-writing. Like Cassius, the lecturer had a lean and hungry look but he may have had a point.

The loose, informal planting on the balcony, helped by this Summer’s growing conditions, has lapsed into an exaggerated informality which I’ve been enjoying along with the pollinators. However, the overgrowth has restricted access to the seating area, making it particularly difficult to weave between pots and fragile stems with glass or cup in hand.

Like other roof terraces, the balcony (much smaller than most but architecturally closer to a terrace) forms the roof of the flat below. Drawings from the period show the main roof ablaze having been set alight by an incendiary bomb early in the second world war,  but now the main risk to life of all sorts occupying this high rise location, is from south westerly winds carrying the tail end of Atlantic storms or less often, scorching sun, somewhat absent this year.

So to this end weeds need to be removed to avoid enthusiatic growth in unsupervised spots (buddleia being the exemplar) and ultimately the risk of water penetration below; stray Autumn leaves clogging the gullies taking rain-water from the ma 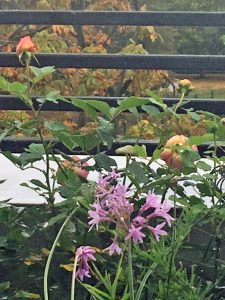 in roof need regular clearing and careful location of pots and containers is key to avoiding damage to the integrity of the roof/terrace membrane. Of course life being what it is, it is only as the storm clouds gather, or Tomasz Schafernaker alerts the nation that all these essential precautions are checked and double checked and sometimes found wanting. So as the water level rapidly rose to dangerpoint, and the escape route for the water from the downpipe was evidently blocked off by a handful of horse chestnut leaves, a recent problem was narrowly averted. Elsewhere I like to think that the dense plant growth forms a sort of temporary protective thatch allowing any vulnerable insect life to re-locate to secure water proof accomodation.

In this uncertain period of history, of climate change and ecological catastrophes of different kinds: plastic throttling marine life, natural habitats giving way to commercial enterprises and countries such as Jordan struggling with an expanding population and barely enough water to survive, there are also initiatives of all sorts aimed at enhancing well-being and the natural world. One such is Sow the City http://www.sowthecity.org/cornbrook.htmworking with Cornbrook Medical Practice in Hulme Manchester to create a new well-being garden for growing, wildlife and relaxing, to provide nature based interventions for patients.

I can certainly relate to the benefits of gardening, to a project that requires some thought, planning and attention, and relative to the setting and space available I do consider that I’m more or less succeeding on the growing and wildlife fronts, while also failing dismally on the relaxing front. This has been pointed out to me. It might be arguable what is meant by ‘relaxing’ but certainly the opportunity to relax might involve a comfortable seat, a place to put drinks, books, i-Pads etc, a chance to linger with friends before or after a meal, a chance to dream. 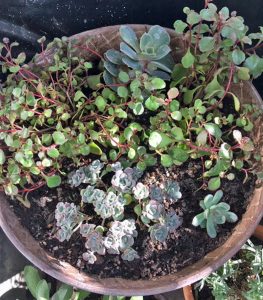 aching the small seating area as the Summer display peaked and then tipped over into a sort of loose intermingling meant a rather discouraging short walk for any visitors to the balcony. Roses and other robust plants acted as a deterrent, while I was inclined to hover anxiously to ensure that anything delicate was undamaged, which was unsurprisingly a bit of a deterrent in itself. By contrast, on the allotment I watched spellbound as a visiting grandchild, eager to touch the growing pumpkins, carefully threaded his way through trailing stems anxiously ensuring that he avoided any damage to the emerging butternut squashes, still rather immature and susceptible to careless footwork.

All rather small gestures to deal with an admittedly unsatisfactory situation, but I’m beginning to think that a relaxing glass of wine or cup of tea with a friend is worth trading in a few plants.

No-dig and other gardening methods

The name of Charles Dowding filtered through to me when I lived and worked in the West Country. At one time I was seeing a young woman in connection with my work who amongst other passions was a very keen allotment gardener, admittedly in a rather sporadic way. Nevertheless she indirectly introduced my to the concept of  the  ‘#no-dig’ method https://charlesdowding.co.uk/, not to be confused with not digging, an altogether different approach to gardening favoured by most gardeners I surmise, at one time or another, when hard pressed or time is limited. The no-dig method relies heavily on the availability of ample quantities of compost which is a commodity that in itself requires a certain amount of discipline to get right. Although living in a building with a compost bin, assembling the right balance of ingredients has so far erred on the side of becoming a waste food collection point rather than a source of a crumbly, nutricious substance that could benefit pots and containers by replenishing nutrients and improving the structure of the growing medium. I’m now wondering if the compost bin could be turned into a wormery with a few adjustments and general benefit as the supply of food waste out-strips other contributions.

Meanwhile in this season of reflection and looking forward, an up to date inventory of plants on the balcony and their places of origin would include:

The opportunistic buttercups which have arrrived and true to form spread and multiplied, as well as the white clover, native to Europe including the British Isles, are heavily outnumbered by non natives in this cornucopia of plants, evidently flourishing and abundant, relative to the setting and space available I remind myself, before perhaps giving a false illusion of scale. The reality being that all can be dismantled, removed and transported elsewhere in a matter of hours and days – see below. 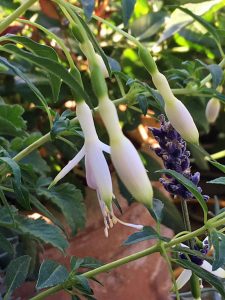 on that comes to mind, when I look out at this rather familiar assembly of informal ‘English’ plants and planting is which came first – a bias towards Mediterrranean plants because of the particular conditions that all plants have to surmount in order to flourish on the balcony (wind, wet and warmth) or is it simply, that these are the plants I love and like and by happenstance and history are largely not British natives (or their decendents) but look very much at home in this informal urban setting.

And does it matter? Taking care to avoid buying imported plants from the Mediterranean does of course matter very much at the moment as the xylella fastidiosa bacterium from the New World is now killing olive trees across Italy and beyond.

An elderly membrane and cracks in stone work have been identified as a source of water penetration elsewhere in the building, so all balconies, terraces and walkways now need to be fully inspected and repaired as necessary so that this interesting, but elderly building can again be made watertight.

The plants and containers are on the move and I am thinking about how to rearrange the space (re-design would be an exaggeration) in order to ensure better access to a re-positioned seating area.

The art critic Jonathan Jones argues that ‘art is the place where discovery and imagination meet’, lets hope the same applies to redoing the balcony. I’m up against time but there are plants that I will discover buried in the undergrowth, and who knows, I may be persuaded to settle for fewer containers.

Meanwhile watering continues as the containers in the rain-shadow still need attention in the intervals between the Autumn rains.