Wandering out in early morning onto the terrace, roof garden, balcony, call it what you will, (even the dictionaries are undecided) at this time of year is to be embraced by flowers and scents, and considerable insect activity, while the visiting birds tend to scatter when I arrive and return when the coast is clear.

My first attemps at growing flowering spires on this windswept high-rise terrace met with failure. I quickly realised that spikes of foxgloves, verbascum, delphiniums or larkspur were all too vulnerable up aloft and even I didn’t attempt hollyhocks, which have self-seeded themselves in my step-mother’s front garden to enviably wondrous effect, with the sun on their faces and the warmth of the brick frontage behind.

So finding ways to add height (and hoping the while for some shelter too) has been a long held ambition and pleasingly has met with some success. Elderly olive 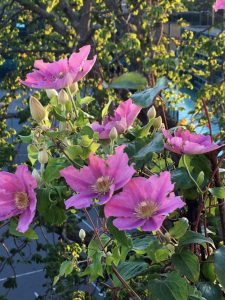 trees (well, elderly by the standards of potted plantlife that has criss-crossed southern England) and several clematii on assorted obelisks, have been consistently happy, as has my first Eucalyptus Nicholii, which for the first time in our acquaintance is exuding a wondrous smell of eucalyptus oil and unsurprisingly is sticky to the touch. But there have been plenty of failures too, usually because I’ve asked too much of plants I have, knowingly or otherwise, planted in the wrong situation; subsequently life in a container has been too cramping, or the wind too bracing or the heat too much.

However, I have asked nothing of the three thalictrum plants that remain of the five I planted a couple of years ago and then ignored. This year, even planted in a crowded container, they are thriving and growing upwards apace, bending and weaving in the wind, with the lower flowering stems threading through, and holding on to, the plant life around them.  They are too airy to provide any protectio 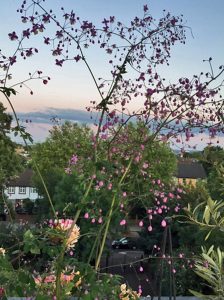 n from the wind but the tallest is well over eight foot, which for my diminuitive space is an impressive height, although of course in the greater scheme of things I acknowledge is rather insignificant. In an area with protected plane trees not far away and magnificent limes that now line an escape route from the Metropolis, and look down on the aforesaid balcony, in this city margin I know I can’t really compete.

I am, however, delighted with this unexpected graceful and quietly spectacular beauty, and feel encouraged to grow more statuesque plants than my relatively modest sized containers would suggest. The verbena bonariensis, which are not long livers, and usually somewhat branching, this year are growing ramrod straight and proudly upwards, in defiance of my disinterest, and have now really caught my eye.

So, emboldened I have ordered some Veronicastrum virginicum Lavendelturm, https://www.rhs.org.uk/Plants/111539/i-Veronicastrum-virginicum-i-Lavendelturm/Details which are really meant for the ‘back of the border’ but once they come will go wherever I find space and that might mean I will be peering through them to the world beyond, which could be an added bonus. And in future I might seek out other late flowering plants for the ‘back of the border’ and plant them at will relying on the surrounding shorter plants to act as stake-holders.

A visiting friend and horticulturalist was impressed, and even more surprised, that I had managed to grow so many flowering plants in the undoubtedly windy conditions. If you can bear the losses and failures along the way and understand that getting to know your particular lofty conditions will dictate your choices, I do commend the effort involved. As a cousin recently observed, I seem to like airy plants with their ephemeral beauty, and I do, but they can also bend in the wind without being snapped off, while the solid brick parapet provides a micro climate and some wind protection for the ‘lower storey’.

I’m not convinced that dividing planting schemes into upper, middle and lower storey is my favourite current convention but it seems to hold sway and I still haven’t achieved the hoped for wind break encircling the seating area – which at this time of year consists of a small table obscured by plants with two chairs buried amongst the greenery. 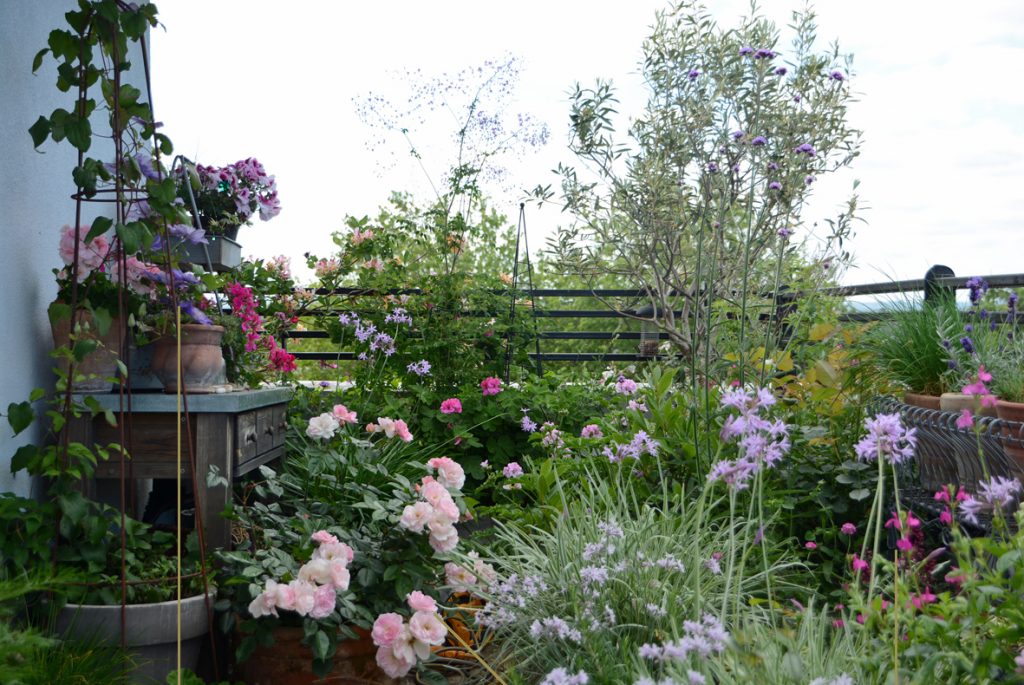 (Hover over photo for name)

And so it Came to Pass

Mid-Summer has come and gone and my carefully controlled palette of colour featuring pale pinks, deeper pinks and mauves (having found in previous years that my contrived ‘pops’ of colour didn’t really work) has now given way to brighter colours, together with white penstemon, Anenome ‘Wild Swan’, now on the wane, and a rather hidden burnt orange rose. I even found a some wild strawberries the other day – hopefully the first of many. 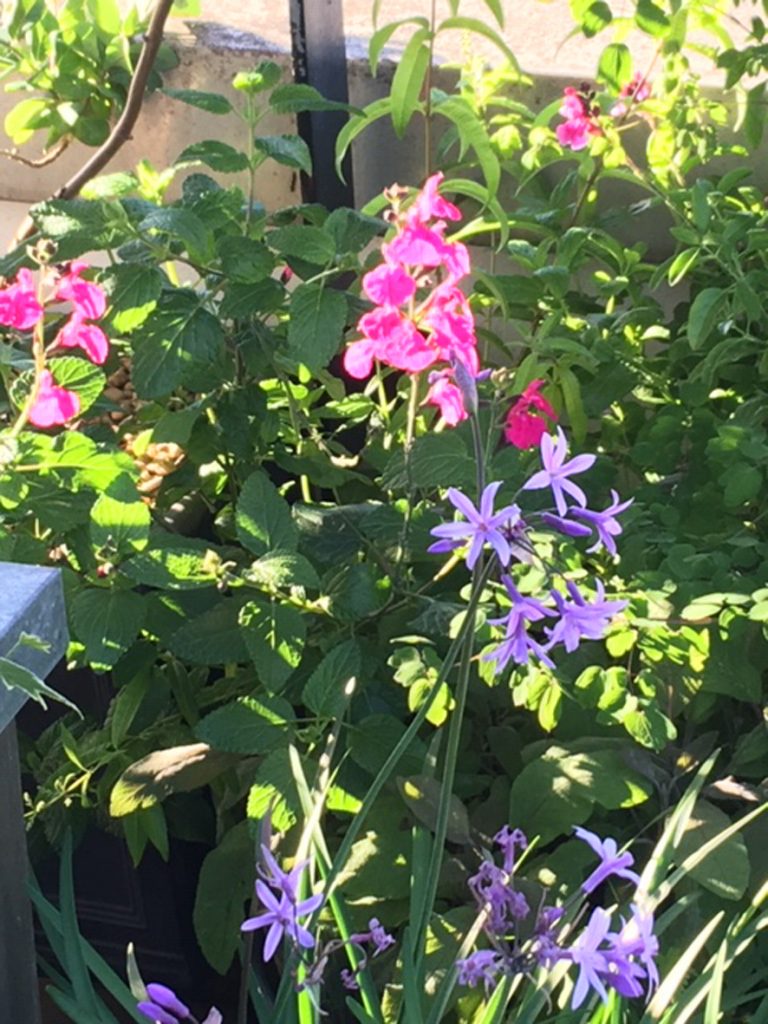 As I’ve explained, sitting outside is often curtailed by chilly gusts which find their way through the horticultural defences, and the larger containers on wheel-mounted pot stands have to be rolled out of the way if more than two people want a glass of wine ‘en plein air’. It’s awkward and a far cry from leisurely life in sunny sheltered gardens but astonishingly still worth the journey for a wide variety of insects and bumble bees a plenty, which arrive early and stay late.

Sitting close to the sky with the clouds, galaxies and planets beyond, is a privilege and to be reminded and amazed by the world around us and our infinitely small place in the universe.

Coming back down to earth, and gardening in such a confined space risks becoming a somewhat persecutory experience as imperfections are hard to ignore. No opportunities for mare’s tail up here (Equisetum arvense, an ancient invasive deep rooted perennial which is the occupying and preoccupying weed at the allotment) or couch grass another ground based invader, but oxalis corniculata, creeping wood sorrel, can quickly gain ground in containers and smother small plants trying to gain a foothold. Pretty enough in small doses it nevertheless has to go, or at least be constrained and is best done while sitting within reach of the larger pots, its preferred site, and drinking a cup of coffee.

My father was both a keen gardener and an enthusiast for the great outdoors (Welsh mountains on drizzly days being a favourite) and he had an eye for design. With age I noticed that the subtle changes of tone and texture in his gardens, which I can still remember from younger days, had largely given way to bright coloured pelargoniums standing out in stark contrast to background greenery. To my shame it was a long time before my snobbish sense of taste yielded enough to recognise and realise that as a man in his nineties, with failing eyesight, these were now the colour contrasts available to him.

Worth understanding for the future too, alongside noticing that for others of all ages, with a degree of visual impairment and reduced capacity to discriminate one tone from another, brightness and vivid contrasts can often work best.

I came across some white clover today in amongst some cultivated bee friendly salvias and verbena. Buttercups happily co-habit too with the ornamental planting as well as this year’s wild marjoram.

I also come across a large pebble some distance from the birds’ watering hole – an old stone platter filled with pebbles and regretably topped up with tap water since there are no opportunities hereabouts to access the rain water without taking possession of the communal drain-pipes. By chance, a Radio 4 science programme was discussing the use of tools by homo sapiens, monkeys and other animals, including crows. My bête-noir. They have a habit of coming to the water dish and dunking offensive looking treasures, using the stones (one of which had clearly escaped) as some sort of utensil, before flying off leaving polluted watery remains behind them. It has to be owned that although one overarching thought when I’m trying to plan for next season’s plants, is what is wild life friendly and how to encourage more, in reality I could do without the crows. 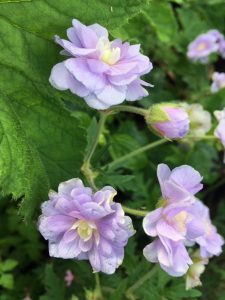 Plenty of untidy corners co-habit with plenty of carefully bred flowers that attract the bees, have long flowering seasons and need very little attention. It’s not exactly wilding which I am in favour of, but have to watch up here, since self-seeding opportunities include cracks and crevices which opportinists might enjoy at the expense of water pentration into the flat below. For ‘WILDING, the return of nature to a British farm’, click here for the youtube clip to learn more https://www.youtube.com/watch?v=-FMfUrSzAjg.

Hardy geraniums bridge the gap between the the bright and beautiful and serendipitous arrivals like the clover. They are generally disease free, wildlife friendly, happy to be chopped radically before coming back again, and seem to enjoy pot life where those that want it can get enough shade and water. Geranium Pratense is a favourite. Last year it capitulated to the heat, this year it arrived early and stayed late and has managed to avoid getting powdery mildew until very recently, which was a reminder to begin the cut back.

And finally : I have found that writing each post for the blog is a good way of paying attention to this evolving high rise garden, and I’ve learnt a few plant names along the way too.