A lingering late summer lunch, in an enviably lawned London garden teeming with bees and butterflies, not least because the plants were chosen with casual beauty, abundance and wild life in mind, was in sharp contrast to the increasingly cramped quarters aloft on the roof terrace as the days shortened. As an afterthought, many of the small and medium sized plants in the larger planters had a growth spurt after their summer dormancy in response to the drought, and the Liliputian Verbena Bonariensis, whilst no match for the full height variety, seized its moment, bushing out and subsequently flowering for weeks on end.

Now, by agreement, the Autumn tidy-up involves keeping the possibilty of reaching the seating area in mind to enjoy the emerging views. The church spire on the brow of the hill opposite is still partially obscured but will soon be fully exposed, and the 270 degree vistas from the Chilterns round to Canary Wharf will open up as the surrounding trees drop their leaves, although to see the extreme margins a certain amount of neck-craning and clambering over pots is required. No matter. It is Autumn, the leaves are thinning and tumbling down as light streams onto the balcony and beyond, and the re-connection with the wider world and the seasonal colours is in itself particular and a joy.

In truth the olive trees, bay and roses have flourished this year, and anything upwards of waist height, and growing in a large container, has unsurprisingly more or less enjoyed the sun-drenched summer, admittedly with my watering, whereas the occupants of the smallest pots and containers have withered in the face of the difficulty of contending with prolonged dry spells. My more experimental planting has also been a very limited success and I have finally accepted that trying to grow Cercidiphyllum japonicum ‘red fox’ in exposed drying conditions, in a cramped pot, has been a rather expensive failure. I’m not sure that they were planted with the addition of mycorrhizal fungi powder either. I was initially sceptical of the life-giving powers of this wonder drug but it works, is not unduely expensive when compared with the risk of losing a beautiful plant, and as long as you remember at the key moment to apply it, that is when it can be added to compost and  container as they are ready to receive the plant, and the roots are primed and ready too, I commend it. Learning to to spell mycorrhizal is more challenging.

So Mediterranean plants it is, together with the unexpected delights of strawberries growing happily close to the building under the shade of neighbouring plants. With mixed feelings I am now giving the larger plants, including a well behaved cistus and multiple wild and untamed lemon verbena, a particular favourite with me and the bumble bees, their head and stacking up the smaller trip hazards with their shrivelled contents.

I will miss them and it is all beginning to look rather neat, although behind the scenes the plant debris is undisturbed and the long lost plastic bottle insect home (made Blue Peter style with the visiting then seven year old) has been spotted embedded in a corner behind an olive tree where it is to remain as permanent housing for the plentiful local insects. The late-summer salvia-filled planters are now wonderfully scent filled too and rather unexpectedly the seating area finds itself surrounded by roses, lavender, the sweet smelling box Sarcococca confusa, sage and rosemary. It could have been a 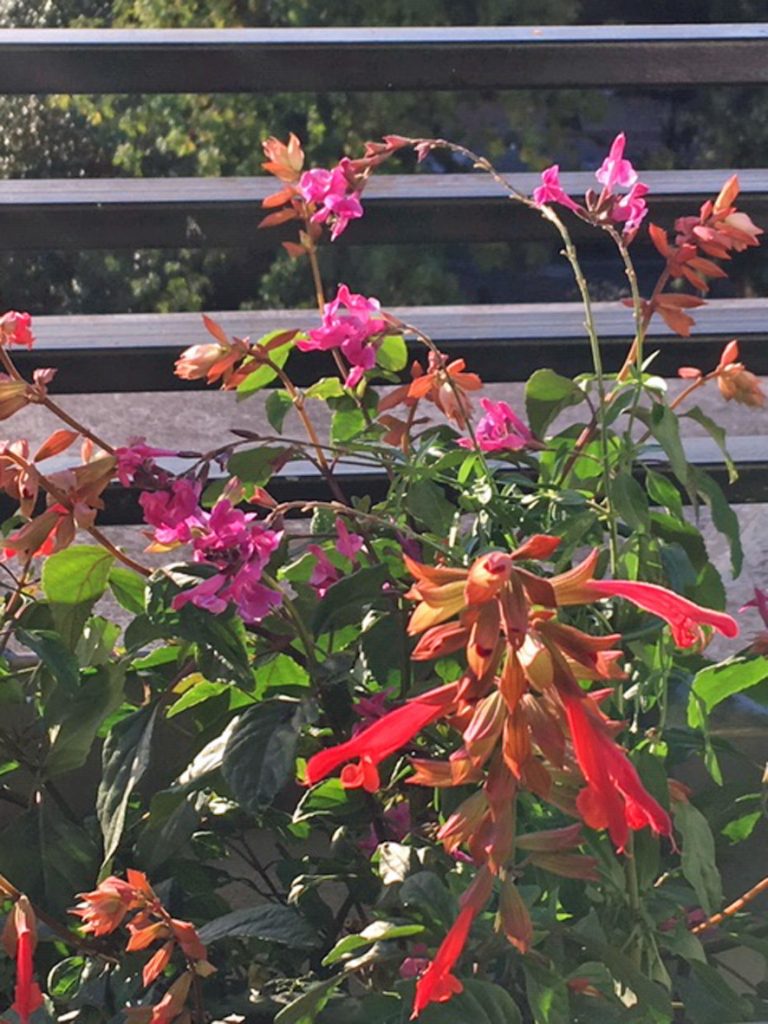 carefully considered pot-pourri but I was looking for shape and texture as I moved things around and then discovered scent.

Green is the Colour

Since leaving the West Country and moving to the South West margin of London my olive trees have thrived on the southerly terrace, producing fruit which I expected the tits would eat.

Transported from a large exposed balcony, with no surrounding tree tops, this sunnier site had been a popular feeding station for numerous tits flocking to the infant fruits which they feasted on with delight. But not so now, which had puzzled me and led me to think that my regularly topped up peanut feeder was more tempting than the olives. But maybe not. I now learn that feeding birds head first for the most easily spotted fruit such as the brightest red rowan berries, and less distinct, softer coloured, yellow or white fruits are not so popular, with green fruit even further down the pecking order. Presumably this is to save energy searching, rather than a taste preference, but I have no claims myself to be an ornithologist although I know a man who does and will ask. It may have been that the green olives had actually been more visible against the silvery olive leaves in the very different light left behind. Whereas now it is green on green although I am interested to see what happens next as this summer’s heat has allowed the olive fruit to begin to ripen, and for the moment they are colouring up fast. 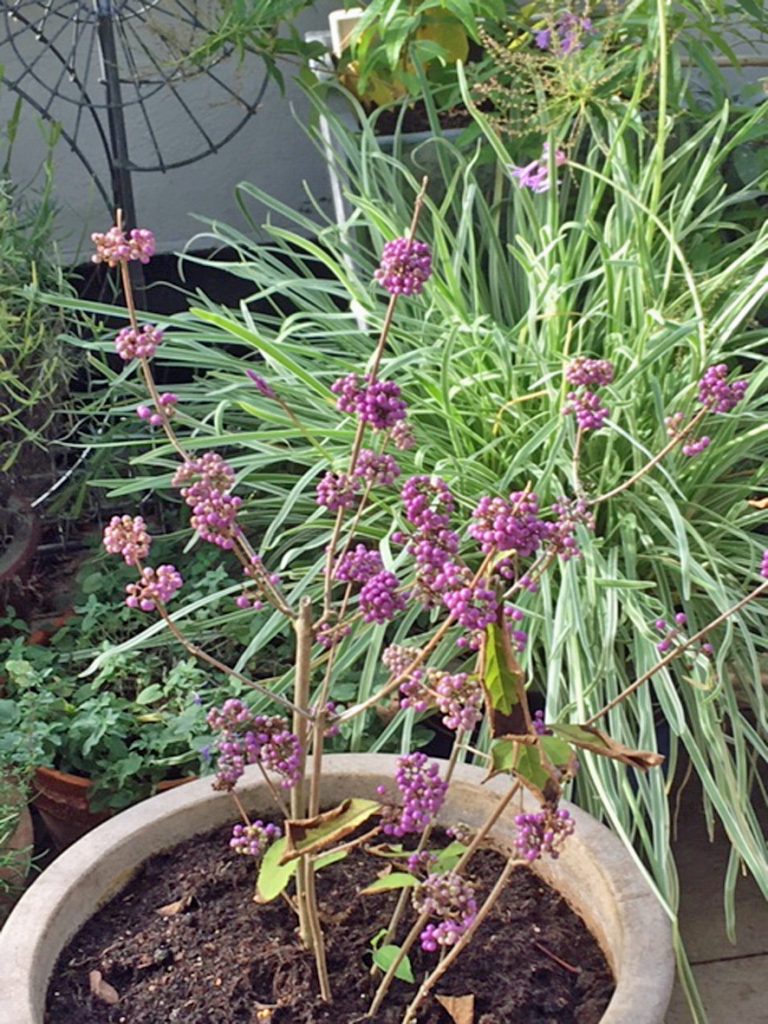 I’m also not sure where violet sits on the dietary spectrum but I’m secretly hoping that the exceptional pigment of the beauty berry Callicarpa bodinieri var. giraldii ‘Profusion’ is not a popular avian delicacy. I’ve been waiting for weeks for the unique colour to emerge and selfishly want to savour it for a little while longer. It is a surprising delicate treasure at this time of year.

The garden below is tree stocked and shrub covered and for historic reasons an irregular shape. Mid-summer had called for a flight to the sun (actually the sun was all around) and having booked a taxi to the airport, a somewhat relaxed approach to time-keeping prevailed. Nevertheless, once the taxi had arrived below with the usual last minute flurry and fluster all was assembled and the parked taxi located. However, there was no driver, which was difficult to explain and for a while disorientating until noticing that he was at prayer, kneeling in a peaceful spot, camouflaged by the greenery. When ready he rolled up his mat, greeted us, put his mat in the boot and drove away on time, having, I noticed, made an adjustment to his call to prayer and accomodated our time keeping. So I was pleased that we had been able to reciprocate and accomodate his need for a peaceful spot.

And if camouflage is required I might have the answer since my gardening glasses have a certain horticultural charm: old lenses, green frames, held together by a yellow paper clip – not a good look I am told but Hey!

For some reason that I have been unable to explain completely to myself, and disinterests others, as I cross the threshold onto the balcony (and it was ever thus entering my own personal gardening space) I relinquish my hair-styled, make-up covered public self for the randomness of early morning nightwear or end of day disshevelment. I immerse myself, only to be seen by a few close neighbours on nearby balconies, and I suppose over-flying pilots with long lenses who I expect have better things to do than wonder about my rummaging and tinkering below. Of course sometimes I get caught out and an insistent door-bell requires a public encounter of an unexpected kind, although I try and remember to remove my paper-clipped glasses.

Meanwhile other recent arrivals have included carefully chosen Spring bulbs. The selection is the result of several evenings careful thought, recollections of previous favourites and the temptations of catelogues. Height, colour and estimated time of 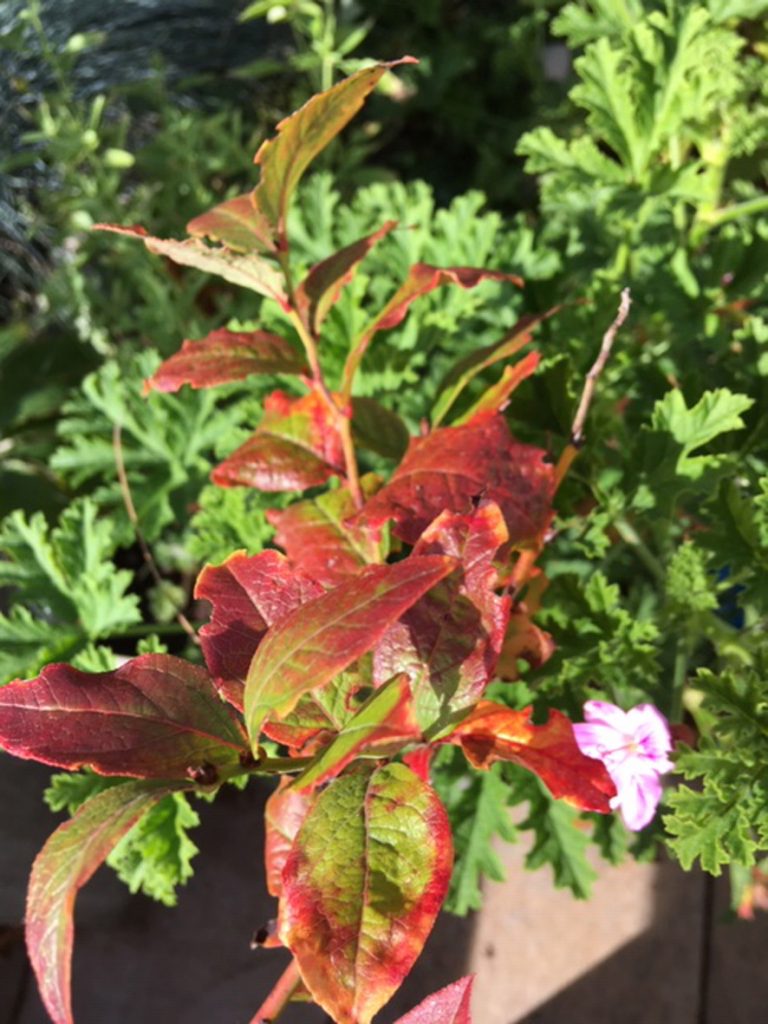 flowering are generally the governing principles but I’m not quite sure why I bother since as I have mentioned before, when it comes to planting I put them where I can and the carefully planned schemes are quickly abandoned. The results of impulse buying might I think, be just as pleasing, although first choosing and then planting does hold out for the possibility of another year, another season, something to savour, not to be rushed.

I now also have high expectations of the newest arrival – my ‘Benjamin’. In a rather unnecessary moment a few days ago I referred to a friend’s youngest child as her ‘Benjamin’. There was no reason to think she would be familiar with this French usage and she understandably took me to have forgotten her son’s name, which I hadn’t. The Biblical reference, although true, didn’t add anything and it would have been much more straightforward to have kept to plain English. Similarly though I always feel particularly protective of any new plant until sure of their intentions, and wonder if they will adapt to the exposed conditions and erratic care. Those that can and do accommodate to the prevailing conditions, remain particular favourites.

So with some trepidation I recently collected a replacement fruiting cherry tree Cherry Pigmy Kordia lovingly sourced and carefully stored, waiting to be planted. It has a beautiful form and is now happily installed (presumably my happiness rather than the plant’s) so I’m hopeful all will be well. In the meantime I have planted it in association with the essential micorrhizal fungal powder (see above) and having acquired some additional horticultural knowledge won’t be tempted to prune except in the summer, with July and August, I read, the recommended months. Silver leaf disease is a condition I’ve never heard of and is spread by air-borne spores, but the cuts heal quickly in high summer so other months are best avoided. Otherwise the omens are good.

When at its best my well-turned-out bijoux roof terrace speaks for itself as well as perhaps in part also speaking for me. Otherwise, it is work in progress and an opportunity for further experimentation.