Lingering conversations with friends are often rather shaming as a real depth of knowledge on topics as wide ranging as Medieval history, 60s pop music, economics, architecture and yes, horticulture are difficult to match, with my sound-bite knowledge of more or less anything. Sadly no specialised subjects and shaming because I’ve often been something of a magpie – picking up other people’s trifles and treasures without the discipline, or thirst for knowledge, to really study a subject. But I am quite good at getting away with it, and as I am eligible for a bus pass, and have listened in to enough discussions and talked to enough people (and I am certainly interested in other people and their lives and experiences) I can convince myself and others that I have something to say, while learning a bit, and sometimes quite a lot, along the way.

So too with the blog.

As each post emerges I find that I have discovered something about the roof terrace I hadn’t noticed before, and that I’ve learned a bit more about container gardening too, while enjoying the comments and feedback, and the prompts to consider options I hadn’t thought about. One option I had hoped would develop into a reality was a ‘mini-orchard’. To this end I was given a very carefully sourced fruiting cherry early in the year but as regular readers will know, it has struggled and today I noticed, that either in spite of, or because of, my various administrations, has at last, very sadly, relinquished all signs of life. 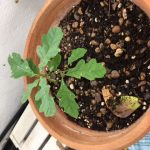 Meanwhile a mature oak tree on the allotment site is a rich source of acorns each Autumn for marauding and hoarding squirrels. The sight of young emerging oaks among the bean poles is commonplace and unremarkable and frequently destined for compost. Aloft, on the other hand, a carefully tended acorn, now small oak, is treasured and will hopefully continue to prosper after its promising start, before in time also becoming compost or more optimistically re-located to a garden seeking established native plants or trees. But for now I will enjoy it while also very much missing the promise of my own hand-picked cherries. I will also contemplate the network of underground burrows and earthworks which are undermining the trees and shrubs in the garden below – with foxes probably to blame. 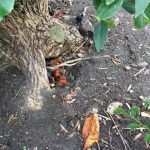 My knowledge of the urban fox, like much else, is superficial and often derived from snatched moments in the car while listening to Radio 4. I first saw images of urban foxes prowling around, in a memorable BBC documentary made in Bristol, at a time which seems now to be in the black and white era, pre-colour televison, but that I think is in fact conflating time past with infra-red pictures that were taken at night and were shown in black and white.

Hereabouts foxes frequently criss-cross the roads at dusk or when food is about, and 20 minute sound bites on Radio 4 have competition from Google and the Internet as the fount of all, albeit limited, knowledge.

At meal times my father made regular trips from the table to his study to unearth an obscure fact or detail, either to satisfy his own considerable thirst for knowledge or to provide the evidence for his side of an argument. Wikipedia can do the same, as long as a ‘no screens at the table’ rule doesn’t hold sway. I now know, have known for about 20 minutes, that the first known version of  ‘Mighty Oaks…….’ comes in Geoffrey Chaucer’s ‘Troilus and Criseyde’ 1374, where the line ‘As an oak cometh of a litel spyr’ (sapling) can be found. Let’s hope that my spyr does at least become a recognisable oak.

I’m not sure what Chaucer would have made of the global exchange of plants, but another tale of mixed fortunes concerns my ‘Eucalyptus nicholii‘. Only one survived of the original three purchased for their feathery leaves and elegant drooping habit, combined with modest height. One has flourished and withstood drought (which crisps them up), cold and irregular feeding, but the other two in time were too exposed to the cold winds and too far away from the warmth of the building to thrive, so I am trying again, one at a time. It has arrived, looks in good heart and will shortly be planted on, which if I am to follow the instructions involves the complications of finding a bigger air pot of the right size, applying the supplied slow release sulphur chips over the soil surface and then dressing with bark chips. Clearly I have a lot to learn about the care and nurture of eucalypti.

What I also learned reading the sale notice from the supplier Grafton Nursery, is that for each eucalyptus tree sold the nursery makes a contribution to ‘Business for Good’ which helps to supply clean water to parts of the world without, so if planning on buying a eucalptus this might be the supplier for you.

Another charity which I have only recently heard about is The Cindy Appleyard Foundation. Before retirement and the allure of life at a different pace, my working life involved working with children and families who were facing difficulties in one way or another. So this charity, which supports families in the most heart-wrenching of situations, when ordinary family life is disrupted, caught my eye.

I did at one time consider being a volunteer for a gardening project which was designed to help the ill or elderly, and would be equally helpful for families at a time of crisis with no time to garden. But I was cowardly and decided that my temperament, which tends to the bossy and controlling, might not be well suited to carrying out the owners’ wishes. I was probably right but it’s nothing to be proud of.

Clematii are reshooting now that the promised rain and cooler weather have replaced the scorching days, hellebores have surprisingly been in flower for weeks, although I’m getting used to their irregular habits, and looking around there are still roses in flower, pelargoniums in flower and a great deal of greenery as the plants which have conserved their energies this hot, dry summer are hopefully readying themselves for a spectacular display next year. 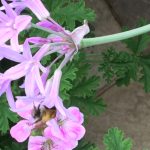 And armed with advice from Monty Don (of Gardeners’ World) I will begin again too, since growing fruit in pots he describes as the ‘good-life in miniature‘. His potted orchard consists of plums, lemons, oranges, blueberries, a walnut, an apricot, mulberries, apples and a couple of olive trees.

I wonder why he doesn’t include cherries since they too (as mine was) can be bought on suitable dwarfing stock – perhaps I can ask. Meanwhile his other choices are rather daunting, although as I have three olives bearing fruit I could say I have a bit of a head start. I’m not sure that anything requiring winter shelter is going to work, so that rules out oranges and lemons as well as apricots, but the idea of a walnut is intriguing, and I can keep trying with my long suffering blueberry plant. It needs a companion and it needs rain, rather than tap water, to keep it going, but this year there was no option and unless I’ve skipped over the relevant section, Monty doesn’t mention pruning which I think I also need to bone up on.

The idea of a walnut in a pot might have cheered my father who was particularly fond of the nuts. My childhood garden had a beautiful spreading walnut tree of the right height and with the right canopy to provide dappled shade for summer meals enjoyed beneath. The kitchen however, was some way from the walnut tree so meals ‘en plein air’ involved trapsing with trays and trolleys the length of the house, up and down steps and across the much pampered grass. Because the carefully tended lawn was so precious, and occasionally used for games of croquet, the heavy wooden table was folded out and back again for every meal, frequently trapping our fingers. Chairs and cushions would follow. In late summer the crowning glory you might say, was the shower of walnut shells from above, as much to my father’s particular frustration the squirrels got there first, just before the nuts were fully ripe and ready to drop, and would sit along the branches eating nuts and shedding shells.

A picnic on the lawn might on the whole have been easier, but as I’m now more inclined to gravitate to grassy slopes (easier to get up from) rather then flat plains whenever there’s a choice, I have become more accepting of this long remembered elaborate summer ritual.

This long, hot summer has confirmed what I already knew, that lingering is essentially a garden activity rather than an accompaniment to high rise living. Here sun and wind, and in my case the essential compromise – upright chairs rather than anything more conducive to a siesta, limit the lingering. But plants need space (hence the upright chairs) a 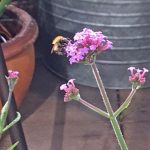 No squirrels or foxes to disturb the peace in this somewhat inaccessible spot, but extraordinarily wild life aplenty, with insects of all sorts enjoying the unkempt marginal areas at the foot of the parapet walls, occasional butterflies, although the effort of reaching a limited reward is barely in their favour, and pollinators enjoying a bumper year. 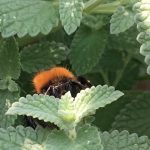 My personal favourites are the bumble bees, which come early in the year and stay late as the days shorten. As with a favourite child in small and subtle ways, as well as my deliberate planting choices, the setting has priviledged these faithful, gravity 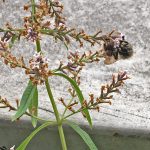 defying and photogenic visitors. My plan is to learn more about them since there are twenty-four varieties (or twenty-five apparently if you include the re-introduced ‘Short-haired bumblebee’) of which I understand only seven or eight species are widespread and abundant. Next year I plan to linger a bit longer and take greater note of my particular bumbles and their distinctive features. I may then go beyond my rather limited classification into ‘big, fat bumbles and the rest’.

But if one of the rewards of this year’s combination of weather, planting and 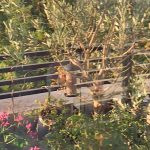 horticultural management has been plenty of pollinators, with birds the story has been rather different as too many displaced feral pigeons, unsettled by nearby building works, gradually took over the water bath and food supplies as summer hotted up. Only the tits, camouflaged in the olive trees, survived the cut backs and continued to enjoy the peanuts, together with the occasional nuthatch in transit. 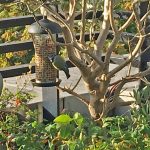 But the pigeons have gone, back to their familiar roosts, and an Autumn tidy-up is due. So with a redistribution of plants and people (chairs under the roof overhang, plants in the open) and more protection for the small garden birds hopefully, with the shorter days, and when experiencing shortages of food, the robins and blackbirds will return. 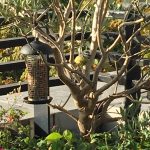 It is nevertheless a tricky balance as I’ve had a request for fewer plants, and more space to stretch out, which is also difficult to ignore.