There are various schools of thought when it comes to watering containers, but at height, with windy conditions and a preference for the aesthetic appeal of terracotta, my view is that letting pots dry out completely is a risk. Even ‘Mediterranean’ plants (including lavenders and cistus) when confined to the limitations of a planter often need more water than you might think to flower and to flourish. I used to favour water retentive ‘pellets’ but as I am disinclined to measure I tended to get the proportions wrong resulting in cold jelly-like amalgamations amongst powdery compost. Now I generally water using a watering can for feeding and a hose for watering, with grateful thanks to my neighbours and their outside tap. So in the recent drought conditions I have devoted a considerable number of hours to leaning out of windows offering a life support system to which ever plants have been in reach. 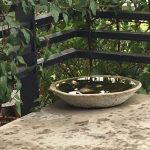 Once upon a time I regularly travelled between London and the West Country and in long hot summers would watch the straw coloured grass give way to green as I made the journey home to the milder, wetter West. Even now, parched grass evokes memories of arriving with anticipation at southern holiday destinations in late evening at the end of an uncomfortable flight, and next morning being confronted by unfamiliar scents and vegetation – shrub sized cacti being the most exotic. 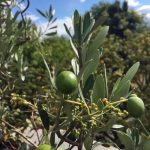 e chance to linger on the sun baked balcony, nurturing the illusion of being part of the ‘olive belt’, has now gone, with the arrival of forty-eight hours of memorably heavy, albeit intermittant rain. The high rise olives are actually heavy with fruit, which used to be a popular treat favoured by the West Country tits. However, although the trees have made the journey east to the Metropolis and are happy aloft, the local birds, tits of all sorts, although regular visitors, seem to prefer peanuts to olives and leave the fruit to first fatten and then drop.

Earlier in the summer I nurtured the hope that the visiting, soon to be eight-year-old gardener, would enjoy some time on the balcony inspecting the ‘wild life area’, advising on insect homes and inbetween doing a bit of weeding in the far flung corners of this high rise spot. But times have changed, the balcony has become a perfect plane and crane spotting spot, and his true love is the allotment where there are potatoes to be dug, beans to be picked, sweetcorn to be inspected, and onions to dry as well as the essential weeding and watering.

A few weeks before he requested pumpkins ready for Halloween, and although size is not always everything, the giant Wallace Whoppers were carefully selected, planted, put in the cold frame and neglected. So in order to redeem the situation I used a rather disproportionate amount of time and effort looking for replacements, and rather than seeds found some Jack O’Lantern pumpkin plants which fortunately quickly established themselves in the ground, but as the name suggests are promising to be somewhat diminutive in size. Serendipitously while looking for a late sowing variety of beans I luckily spotted and bought some substitute Wallace Whopper seeds. Since the weather was warm and sunny, and my watering attentive, the seeds germinated quite quickly, and the plants were planted.

Now several weeks later, and having enjoyed the sun, they are not only growing well but their leaves are providing much needed shade for other allotment crops, particularly the nearby carrots and beetroot which are turning into ‘mini whoppers’ themselves. And nothing is stopping the production of courgettes, retarded a bit by the drought, but still cropping, and exhausting both my enthusiasm for new recipes, and the storage space in the kitchen. By tradition, a wall by the allotment is used for any surplus crops in exchange for an informal ‘neighbourhood watch’ scheme, but the direct route, straight from plant to compost bin, is becoming ever more attractive, without the inconvenience of cooking inbetween.

This summer the allotment has been a quiet and peaceful retreat, with only 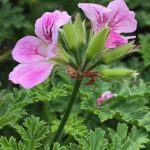 the occasional murmurings of Radio 4 breaking the sound barrier, although frequently much too hot to linger beyond essential maintenance. While aloft on the balcony the scene has often been alluringly beautiful as flora and fauna happily mingle in the sun, but particularly at week-ends, the calm is often interrupted by deafening noise as motor-bikes roar south, leaf blowers at the nearby school come into action and builders up the road work overtime. All accompanied by the shriek of parakeets.

However, abruptly, as if responding to a conductor’s baton, the noise will stop and once again this beautiful oasis can recover a sense of peace and tranquility.

The Birds and the Bees 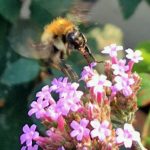 I can report that often after picking the last of the peas and beans, lifting the first crop of potatoes, smelling the early sweet peas and doing a certain amount of allotment maintenance it would be time to go, leaving the peaceful site largely taken over by butterflies and pollinators, but much too hot for more hard work.

Deadheading the cosmos was always too erratic and it quickly became obvious that the dahlias would be on the losing side in any competetion. Wrong variety, too overcrowded, planted too late, too dry, soil not rich enough (perhaps in need of visiting wood pigeons) while a WhatsApp photo showed a dahlia at the prize winning end of the spectrum and something to emulate another time.

Meanwhile back on the balcony, while roses or rosemary are often plants for remembrance, for me it is wild marjoram – which would probably be very happy on the allotment but not so (as yet) on the balcony, and rather like attempts at managing mysterious me 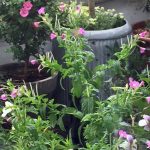 dical ailments by trying too many different remedies which only confuse the picture, so too with this herb, which is still in need of an appropriate herbal remedy. However, I have been wonderfully compensated by the arrival of another ‘weed’ which now stands at over two foot, gives the bumble bees a  treat whenever they are passing, and faithfully offers beauty and abundant flowers week after week.

Help with identification would be welcome as I’m inclined to forfeit more sophisticated planting next season for more weeds of this sort – hoping that it is not on the prohibited list.

A Tale of Two Cherries 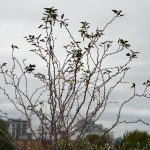 But all is not well in this illysian roof garden.

My Kojo No Mai Japanese cherry came through the Winter, and the Beast from the East, produced a wonderful, albeit brief display of snow-white blossom and a healthy cover of young leaves and extension growth on the branches, but then as the drought took hold, a rather curious distribution of leaf loss emerged.

The distal extremities continued to flourish while close to the centre of the tree, and incidently to the railings, all signs of leaves, leaf buds and health was vanishing fast – all down to a thieving magpie, which admitedly was probably thirsty, and upset by the not always consistent supplies of water, and was taking revenge by removing all the young, succulent, leaf buds.

Hopefully the tree will recover, although I now have an even more ambivalent relationship with the larger birds that swoop down for food. 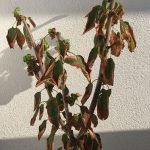 However, much more disappointing, has been the repeated infestations of cherry black-fly that have taken over my eating cherry and defied manual removal, soapy-water spray, lady-bird ‘therapy’, surgical removal and much else besides. It will have to be found a new home on the allotment and given life-support treatment until it can hold it’s own.

Nevertheless this early late summer season has much to commend it as the urgency of keeping things going has been relinquished and the tapestry of plants, mostly doing their own thing, is an alluring combination of muted colours and soft scents, still a favourite haunt of  bumble bees.

Even on this minute scale, redesigning and re-configuring the roof garden goes on. Some plants have done well and taken over, some have failed and the proj 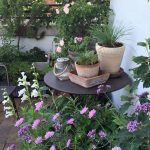 ect to provide a more secluded seating area, shielded from the wind, has only been a partial success. True it is less draughty but it is so overcrowded that anything more social than one and a half chairs is impossible to fit in – I’ve had a request for space to put a tray for drinks of all sorts, but this would involve clearing the tiny round table of plants so has yet to be accommodated, although I can see that the trade off might be worth while.

A wisteria which arrived as an unpromising six inch stick-like specimen is now rambling through neighbouring plants, including the bay, olive and other plants offering support, so will soon be relocated. Wild strawberry plants are looking healthy, fuschias are preparing for shorter cooler days, and the catalogues offering spring bulbs are beginning to arrive. Loose abandonment and the limitations of space and circumstances will soon, once again, gradually give way to potting and planning.