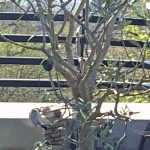 Today it is warm and still, with the promise of heat to come. The heat will inevitably bring its own challenges, including the essential watering, but for the moment the birdsong is soaring above the traffic noise below while the sun dances on the remaining tulip petals, and the tits busy themselves toing and froing, from water bath to feeder, and back again.

The distant horizon is still visible, peeping through the early summer leaf canopy surrounding the balcony, which in its turn is now full of life, with plants of all sorts about to burst into colour; thrift, roses soon and the cistus poised to break into flower, all adding to the  attractions for the plentiful flying insects.

Arguably the density of plant life is excessive and I should be, could have been, more selective – less risk of fungal disease, less maintenance, fewer trip hazards.

But this late Spring, behind the abundant display, admittedly now predominately green as this season’s flowers fade away, there have been some keenly felt losses including the evocative Snakes’s Head Fritillary which didn’t return this year. Although often surprisingly happy planted in a pot this is evidently now a step too far from their natural habitat, memorably the arrival point of childhood pilgrimages to the flower-filled, low lying, college meadows my father loved. 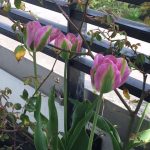 ar inventory and subsequently ordering plants to replace, supplement or for their seasonal charms. I’m no expert colourist but I know from experience that attempts to add ‘pops’ of colour require a more sophisticated gardening mind than mine, otherwise on my scale the result is the occasional irritating distraction in an otherwise pretty picture. So it is a familiar, faithful palette of pinks, lilacs and whites, with predominately silver grey foliage that I look for and like. 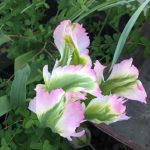 Since one way and another the plants arrive at different times, and the summer planting overlaps with late flowering Spring bulbs, there is competition for space in the already crowded containers. So regardless of ultimate height, preferences for sun or shade and better or less good associations, I put the new arrivals where I can. And surprisingly it often works. I do, however, buy with regard to some well tried planting ideas, so three of this, five of that; odd numbers being best I am told. But when it comes to the planting they are scattered more or less randomly with complete disregard to any planting scheme or plan. 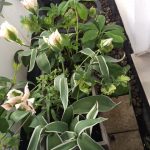 I have yet to master the difficulties of relinquishing the ‘add to basket function’, either on-line or at the local garden centre, when shopping for a very small space from an apparently infinite choice. Although the same space could of course be differently arranged – more formal, fewer flowers, more furniture, fewer flowers or just fewer flowers.

Now Spring has been supplanted by early Summer and a few days ago my beautiful rambling rose (which tolerates its cramped quarters surprisingly well) was looking luscious and abundant and I was full of anticipation. Having decided that the relatively few greenfly could be a reward for the hover flie 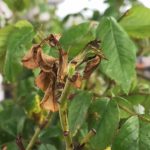 s that were beginning to make the ascent, I was looking forward to the opening buds and another generous display. It was the wrong call. The green fly spread like wildfire, and reduced the rambler and its neighbouring china rose to a disease ridden tracery. Too late I sprayed all the roses with dilute washing-up liquid, but this was initially a particularly futile attempt at taking control and restoring order, since the use of a spray bottle at altitude was immediately thwarted by the prevailing wind. 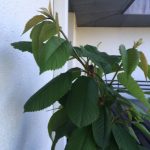 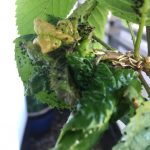 However, persistence and dedication have paid off and the green-fly have given way, so hopefully the roses will now recover. As in other years the aphids seem to make a bee-line for the tempting bud tips nearest the walls of the building, presumably for warmth, but also easier to reach when spraying through an open window. So if they are determined to come I will be waiting next year, and get into my stride rather earlier. But now the black fly have found their way to the fruiting cherry, well, no fruit yet, but the chances will be reduced if they too don’t respond to my regime. 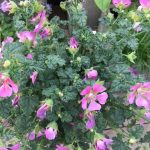 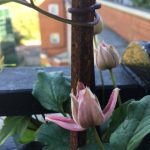 Meanwhile olive trees, that I sometimes read need to be taken indoors, lemon verbena, lavenders, and thalbuglia all seem at home, and are coming into growth, unlike the Nandina Domestica which is still struggling. The various clematises are spreading their wings and there are some new arrivals too. But I know from experience that this is the season when more than any other, I guiltily neglect other things, and resent being pulled away from my roof top garden and the nurturing it needs, and I feel drawn to give. I also know from experience that very soon the moment will come when I can let go, enjoy the wayward habits of my much loved patch, with the evening watering then a pleasure filled ritual; a time for musing more and minding less.

In the meantime there is work to be done and plants to dispose of.

Dead, dying or dormant? It can be difficult to know when to accept reality and the painful truth that a plant or plants are no longer, never have been or never will be a joy. I was expecting to discard a clematis ‘Broughton Star’ that was failing to cover the obelisk, but heavy rain and freezing wind stopped me from venturing out, and when I did it had burst into life and is now in full swing. My wisteria is only a meagre six inches tall so patience will be needed but it looks healthy and may keep going, but a ‘For Your Eyes Only’ rose, which never rewarded the effort to source it, has gone. The rose arrived at the height of the flood that caused havoc late last summer. It then ironically struggled from lack of water as emergency measures meant it was flung into a far away corner of the balcony, and was crowded out by other horticultural refugees from the storm, and never fully recovered from the early neglect. By then it had anyway lost its charms. 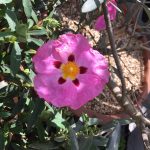 Meanwhile my efforts at blueberry growing have been put to shame. After a Bank Holiday lunch I was shown three proud, pot-happy, productive, glossy-leaved blueberry plants, enjoying their sunny spot and ericaceous compost, under the watchful eye of their owner. They will be ready for picking later in the year and are almost as enviable as the immature, but flourishing, wisteria nearby, with its promise of an early summer coating of pendulous violet flowers. I have managed to provide the ericaceous compost but I’ve skimped on the rest and have never had a harvest – although one or two berries h 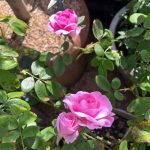 ave been enjoyed by visiting birds.

Amongst which continue to be the noisy and distracting parakeets – they never land on the balcony but disturb the small birds that otherwise might. However, I now know that the peregrine falcons nesting high up on a nearby hospital tower are partial to parakeets (sadly kingfishers too) and their feathers have been found in the falcons’ nests. It’s not always easy to know who to support, since there are various potential unintended consequences, but if the peregrines are looking to move on, there is a high rise nesting-site above my head.

Back down to earth I will soon need the assistance of a small agile visitor as the ash tree opposite has spread its seed, some of which is now coming into life in rather inaccessible corners, so before any really get hold they need to go. I also dropped a bag 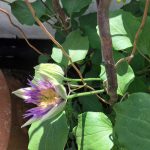 of bird-food, sun-flower seeds as it happens, and am hoping that not too many gain a foothold.

Meanwhile down at the allotment crops are now planted and the flower strip too. The plentiful fern-like mare’s tails are temporarily in check and any sunflowers would be welcome.

Beyond the obvious – cuts, bruises, back strain, rose-thorns, trips (steps my personal undoing) and falls (ladders being an obvious risk) as well as eye injuries, power tool problems and a long list of allergies, there are risks of a very different kind.

I am a snob, and although I know this about myself it doesn’t stop the struggle to relinquish this undoubted, and often completely unreasonable part of myself from getting in the way of accepting ideas that are new and different but which don’t easily fit with my pre-conceived preferences.

But over the winter I have been buying pot-movers. I was converted as soon as I had bought the first (very carefully chosen) one and put it to use. My prejudices were largely to do with a reluctance to accept that they might help, since I have had an inflated idea of my capacity for managing my small space, including lifting and moving pots when 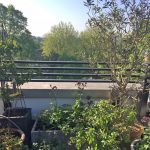 needed. What I hadn’t reckoned with was the relative ease with which I can now now move the large pots (with not much more than finger tip encouragement) in order to reach hidden corners or make space for guests, still required to squash up amidst the greenery but somewhat better accommodated. The bonus of having perfect drainage provided by the mobile pot feet is not to be underestimated either. I do however, continue to camouflage the ‘offending’ wheels whenever possible. 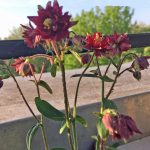 I’ve also become converted to gravel and grit, covering several of the pots with a decorative layer – good for preventing evaporation, more attractive than mud in winter conditions and hopefully will deter invading oxalis too, a pretty, but unduely prevalent, pot-loving weed. However, if I continue in this vein there is a danger that I will convert the whole roof garden into a horizontal pebble-dashed landscape.

If the challenges of managing my roof space can be pre-occupying, and occasionally daunting, since the question of ‘weight bearing capacity’ is never far away, the Bosco Verticale takes things to another level in every way. These beautiful tree planted, shrub filled tower blocks, in the centre of Milan, are wondrous creations combining beauty, ingenuity and optimism. The hope is that buildings along these lines can go some way to offset the effects of global warming in urban settings.

And the silver lining for a keen climber with a horticultural bent, could be the option one day to apply for a job as a gardener on these magnificent edifices – a wonderful career move for anyone fluent in Italian.

More immediately there is a chance that a long planned journey, in a few days time, which fortunately involves changing trains in Milan, means I may have an opportunity to glimpse these amazing towers. If the train is on time and my companions not too anxious, a  google map check suggests that there might even be the possibility of a quick dash to see Bosco Verticale for myself – such stuff as dreams, architectural ambition and engineering skill are made of.