A Week is a Long Time

………….in politics and in a garden at this time of year.

I returned home from the West Country after Easter rather anxious about the impact of yet another Beast from the East, but found things had moved on and changed from predominately brown mud with sticks to spring green with lots of emerging growth. My ornamental cherry Kojo-no-mai was almost in full flower closely followed by the fruiting cherry, together with the Clematii racing skywards as rapidly as possible, lured I presume, by the day length rather than the consistently absent warmth. 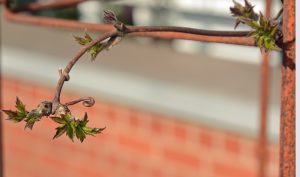 However, for some reason I had planted some Lewisia in carefully prepared gritty compost, well suited to their liking for good drainage, and had then in an absent minded moment put the rather plain container into a more decorative outer vessel without any drainage holes. They were floating in water when I found them so I hope, having had a chance to dry off, they will recover. But I will be lucky if they do as this damp and murky weather seems to be clinging on. I’m also not entirely sure if they are plants I can really get to love so this will be a test of our developing relationship; the episode perhaps underlies my ambivalence.

Meanwhile, yesterday I bought some bamboo plant labels, lured by the possibility of being more systematic and rigorous about plant identification, as well as thoughtful about the use of recyclable materials. Container gardening can score badly on both as the turnover of plants tends t 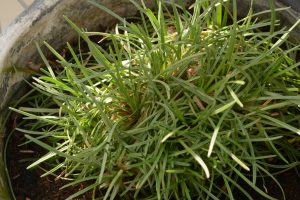 o be a bit higher than in other locations and as it is often a question of gardening at the single plant level, as one gives way to another, the turnover of names to remember is also correspondingly high, and given the frailities of my Latin education there is little to fall back on.

I have struggled with a succession of Buddleias in spite of buying varieties prepared for the pot (I have probably over-fed them) and at the moment have a plant that I have little confidence in. This is odd for a Buddleia since they grow so prolifically everywhere else, including opportunistically on roof tops where they will catch any passing wind. However, Buddleja alternifolia Unique (‘Pmoore 12’) was voted Best New Introduction 2017 by the Royal Dutch Horticultural Society and is pictured in a fine container with rich purple flowers in profusion, so possibly one to add to my short list. Photos can of course be deceiving and the name is rather long for my bamboo label, challenging for my imperfect memory and susceptibility to absent mindedness.

Another ambition, still in its rudimentary stage, is to get involved with one of the Capital’s voluntary organisations promoting opportunities for gardening in schools. But of course as has been pointed out, any mention on the blog, or perhaps a separate post, would have to be adapted if it is to appeal to younger readers, and the Latin names might have to go which could come as a relief to everyone.

Tales of the Unexpected 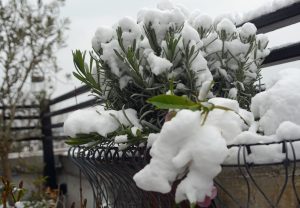 A recent trip to Cornwall could have been a chance to escape the snowy east of the country and visit some wonderful, long established gardens with magnificent magnolias, azaleas and other shrubs generally happier in the milder, damper weather, and the more acidic soil at the toe of the country.

However, with the exception of one sunny afternoon the descendants of these beautiful imported specimens were largely seen in passing, driving through villages and small towns, rather than in wooded valleys and at closer quarters. Both have their rewards but the weather was sufficiently wet and chilly, and the ground muddy, to be a deterrent. Many of the spring flowers and much of the blossom too was largely checked. The exception, a visit to the Lost Gardens of Heligan, was sunny and dry, but the anticipated display will begin to emerge more dramatically in another two or three weeks time. The bones of the garden are indeed impressive and the once again productive kitchen garden an exemplar of vegetable gardening on a grand scale, dwarfing the roof garden and allotment hereabouts and rendering any comparison with their grand country cousin somewhat absurd.

What they have in common is the hope of renewal.

The high spot for the accompanying puppy was a first encounter with a full scale, well-dressed scare-crow standing on guard in the kitchen garden. Hopefully, the feathered intruders the scarecrow was intended to deter will be kept away, but the puppy was puzzled and frustrated when barking excitedly didn’t elicit any response. An intruder alert of a different sort, carefully set-up in a distant location, required coordinating the combination of camera, Wi-Fi, app, power source and careful positioning, which took time and concentrated effort to ensure best effectiveness, but in the relief of completing the process, and in the haste of departure, all power was turned off, rendering the hard work obsolete. No such problem for the scarecrow. 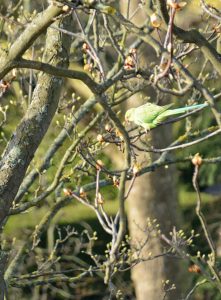 Parakeets have an exotic reputation but are not universally liked in the South West of the Metropolis – too noisy, too greedy being the main complaints – and perhaps of most significance to lovers of smaller garden birds, unwantedly scary. However, at this time of year, when the horse chestnuts, only feet from the balcony, are still in bud, the marauding squirrels and green parakeets compete for these seasonal fruits whilst anxious onlookers hope that they will be sufficiently distracted, so that in this race against time enough buds will survive to develop into a seasonal canopy for a brief few weeks before old age and infestation take over.

In this window of opportunity the wood pigeons (usually no more than two but occasionally more) that habitually parade up and down the coping stones on the balcony wall deterring many of the smaller garden birds, are themselves deterred by the parakeets who stay away from the building and shriek from the safe distance of the nearby branches – so tits, blackbirds, sparrows and others can, for a while, feed in peace and drink deep from the roof top supplies. A virtuous unintended consequence.

Meanwhile, at the other end of the country, lunch with friends in a hidden away rendezvous ended with a surprise gift – an infant Echium. These are, I read, on the whole welcome as striking and unfussy plants which grow to a considerable height (so wise not to place immediately under the roof overhang) and good for pollinators. It is tempting to acquire a container with a capacity to match the potential of the plant and put it in a more or less southerly sheltered spot away from the worst of the wind. But it may be pushing the maxim ‘right plant, right place’ to its limits, so another option is the allotment, which this year will have a designated area for cutting flowers, an alternative to the flower filled summer gardens I seek out when in the countryside and in search of wider spaces. Driving back to the city, towards the end of July, as the fields turn golden and the traffic builds up has always been a wrench but I also knew, and know now, that the city is my natural habitat. Whether my Echium can establish itself away from the West, to the Thames alluvial topsoil will be revealed, but if so I may have to buy some taller vases if I am ever to use them as cut flowers. Although not particularly long-lived, they can settle down and breed profusely to the point of being classified as invasive so I will have to watch and wait very carefully.

(Footnote – so far so tall – some water and a spot away from the wind has already resulted in a growth spurt, so when the rain stops, relocation to the allotment will be a matter of urgency where in time it might be a competitor for any neighbouring giant sun-flowers)

Not long ago having arrived early for a flight south, and after negotiating security and other necessary hurdles, the somewhat tedious wait for the airport’s gate announcement was transformed into a coffee break with the gardening seven year old’s father. He was also waiting for his flight to be called, but as a pilot, rather than a harrassed passenger. Since the conversation was inevitably weighted towards travel plans and questions about where next, it came as a surprise to discover that the impressive caps worn by airline pilots (maybe not all but certainly many) have the rota for their flights ahead concealed in the crown. 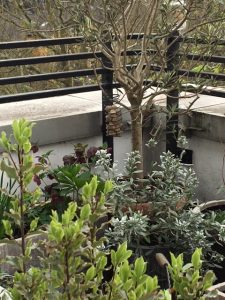 No such governing organisation has been in evidence in these early months of the year, as waves of wintry weather have assailed the country and countryside and even the elevated balcony has had to contend with snow on top of the wintry winds. So far though, the resilience of mother nature has largely won through although there have been anxious moments and some surprises. Nandina domestica, bought especially because of its qualities as a screen, has suffered and so far been checked, whereas the Cistus x purpureus (please note originating in the Mediterranean, and famously drought tolerant) has rewarded each sunnier interval with an attempt at new growth. Who knows what damage, if any, will have been done in the longer run, but for now I continue to hope that the Easter battering will be the last onslaught for a while.

This is also the time when I need to get organised. On the whole I am quite good at set design, much less at planning, so I’m well suited to a roof garden where pots can be moved and schemes easily changed. However, an allotment is very different – neat rows are required, forethought is needed and random planting inadvisable. I am, however, well versed in the notion of companion planting and Charles Dowding’s ideas on the ‘no-dig’ approach to vegetable growing, so I will have something to offer, if asked, as this year I get more involved with the much loved and carefully nurtured plot now inherited. Unanswered is the question how best to ensure my timings and guard against the things that can easily get overlooked – feeding, pruning, tying in, watering, potting on? I have tried diaries and journals with attractive coloured tags to steer me towards the right section and seasonal prompts, but once the work gets busier these masterpieces get put to one side. I have thought of charts but there is no obvious place to keep one helpfully visible when needed, and although this is the time of year when I turn from window shopper to gardener I doubt if new headgear is the answer. 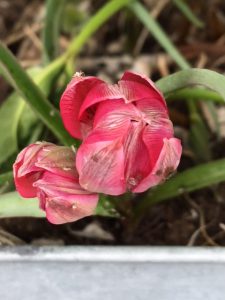 Meanwhile both emerging tulips and the early growth on some roses are already distorted by green fly but joyously, on cue, and with no need for artificial aids the first bumble bee has arrived to take its fill. 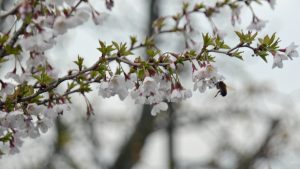